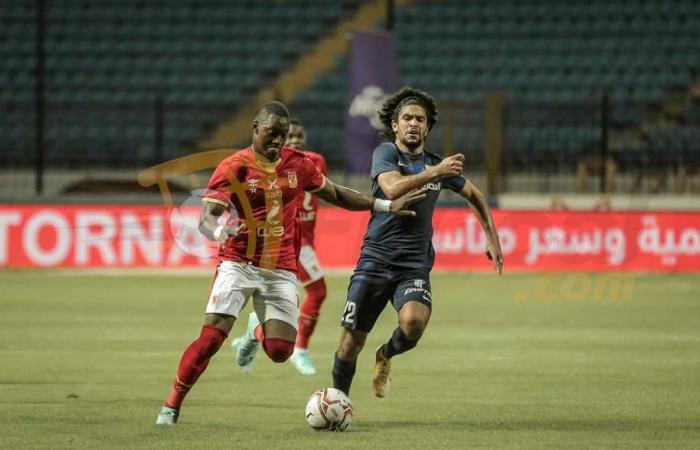 “The difference between the Super match and Enppi is that we scored a goal“..

This was the opinion of Al-Ahly coach Pitso Mosimane, after his team defeated Enppi 1-0 in the Egyptian Cup final, days after losing the Egyptian Super title to Tala’a El-Jaish on penalties after a negative tie.

Apart from the change in the wings, Musimani included Aliou Diang at the expense of Hamdi Fathi in the midfield, perhaps the change that gave the South African an advantage over Helmy Tolan during the match.

Aliou Diang retrieved the ball for Al-Ahly during the match 15 times in 97 minutes, compared to 13 times from Hamdi Fathi in front of Talaa Al-Jaish in 124 minutes.

Here we must take into account that the Tala’a Al-Jaish match extended for an additional time, but it should also be noted that the Vanguard of the Army relied on a medium and low defense in front of its penalty area, while Enppi liberated a little and put pressure on Al-Ahly along the pitch sometimes, which gives Diang an advantage due to the difficulty of the task.

Diang added offensively to the red, with 3 dribbles and a pass success rate of 92%, making his teammates more satisfied with his presence everywhere on the field and receiving 68 times from them without error, and giving them the necessary passes to make the difference.

Here, we can refer to the cross ball that Ali Maaloul played and was met by Mohamed Magdy “Afsha” in the external net in the 38th minute. Maaloul was in a place that allowed him to play the cross successfully and without pressure, because Diang penetrated and got rid of the old Ahmed with a rare physical strength, and passed to Maaloul after he The right midfielder, who is supposed to put pressure on the Tunisian, moved to put pressure on Diang.

In light of Mosimane’s desire to play with a high defense, the pressure of the opponents, and the threat of their mass defenses without worrying about counter-attacks, he always needs to recover the ball as quickly as possible to protect his defenses and apply counter pressure, which is impossible to keep Aliou Diang on the bench.

9 times during the match, Diang got the second ball, allowing Al-Ahly to start a new attack, which was evident through the improvement of the offensive red against Enppi, compared to the vanguard of the army.

These were the details of the news FilGoal | News | Aliou Diang.. the real difference... for this day. We hope that we have succeeded by giving you the full details and information. To follow all our news, you can subscribe to the alerts system or to one of our different systems to provide you with all that is new.