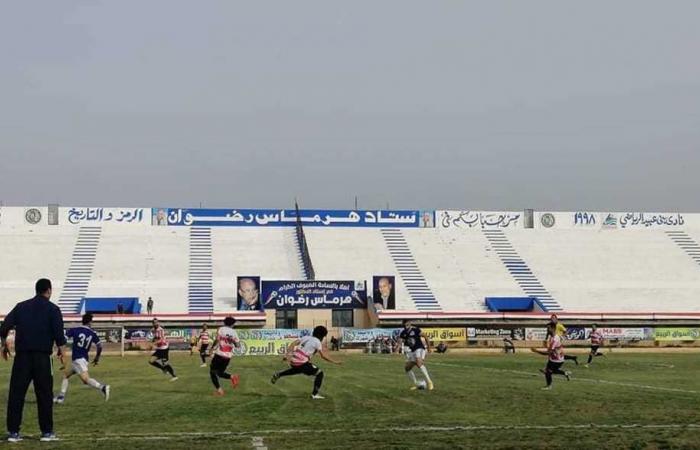 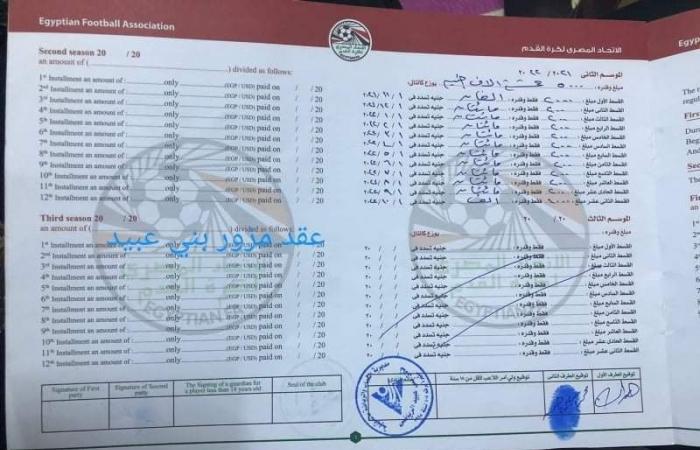 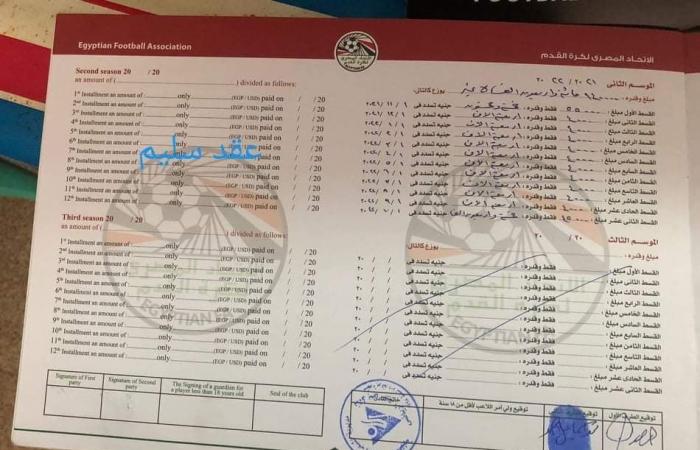 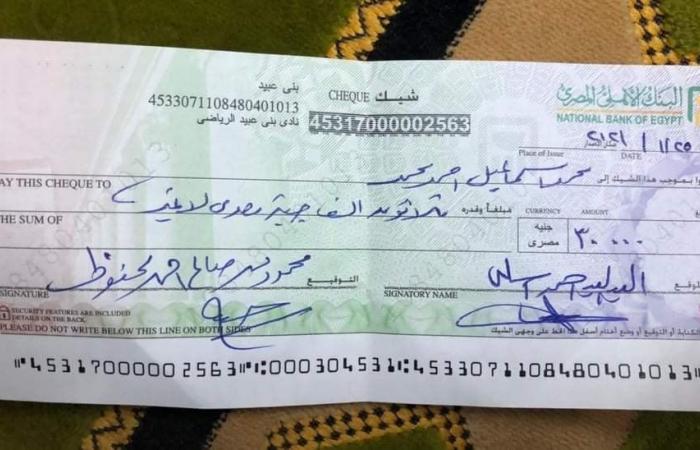 Three Bani Obeid club players were accused of falsifying their contract and transferring the value of the contract from 150 thousand pounds to 5 thousand pounds per season, while giving them a check without balance, while obtaining a ruling to imprison a former club official.

And attention FilGoal.com To know the details of the crisis from its outskirts.

Issam Abdel-Sattar, a player from Bani Obaid, told FilGoal.com“Last season, we were enrolled in the Bani Obeid Club in the second division, before the death of Dr. Hermas Radwan, the former club president, and contracts were agreed upon.”

He added, “The first year we receive 150 thousand pounds, then the next season 170 thousand, and copies of the contract were activated. After the death of Dr. Hermas, we did not talk about the preliminaries of the contract until we spoke with the club, and there was no response every time, and the matter became useless.”

And he continued, “We decided to stand against the club’s management, so they issued a check in exchange for 30 thousand pounds for half of the contract provider, and it was due last January. We preferred to be patient and went to the bank and found a balance, but we were not entitled to exchange, and the next day we did not find a balance for the club in the bank, so we got a rejection of the check.” .

And he added, “We went to get a copy of a contract from the Football Association, and we were surprised that the contract had been forged, and the contract became 5,000 pounds per season.”

He explained, “The club’s response was to suspend us from training, and we filed a complaint, accusing the official of forgery, and taking measures with the check. We received a 6-month prison sentence for the official who signed the check.”

He continued, “We went to the club, and they said that we would not register you in the new season. An administrator spoke to us and said the dispensation exists and we got dispensed, but we were surprised by being registered in the first list, and we went to the Football Association by dispensing with what we obtained until we are removed from the list, and the Football Association continued with the club, so the club responded that the dispensation was fraudulent. The seal was stolen, and as a result, Al-Ittihad refused to remove us from the list, despite the fact that we signed other clubs based on the dismissal.”

And he added, “We did not reach a solution. We are 3 players who were subjected to contract fraud. What is our fault, and we will file a complaint with the Public Prosecution Office, and if the lists are closed, who will compensate us and we signed for other clubs, we must take quick decisions from the Football Association, so our contract is not 5 thousand, and is it reasonable for a player in the second division to contract with this number? ?

He concluded, “We will not give up our right even if we retire from football. They offered us to buy the check for 10 thousand pounds, and the team players had checks with them, but the matter was settled.”

And by heading to the Bani Obaid Club, Hisham Radwan, a member of the club’s board of directors, responded via FilGoal.com He said: “Before the death of Dr. Hermas Radwan, all the team players agreed on certain contracts, so Dr. Hermas passed away and there was a club president who took over after the death of Dr. Hermas, so he went to the union and found that the contracting fees would cost the club 400 thousand pounds, so he decided to reduce the contracts with the players giving contract checks so as not to He pays big fees because it was Dr. Hermas who was paying the club.”

He explained, “The trio was subjected to a really bad treatment from this person, but he is now outside the current council and they obtained prison sentences against him. Before the elections, I continued and offered them to get 50 thousand pounds for each player and leave, but they refused and asked for 170 thousand pounds, even though the team was relegated to the third section.”

And he continued, “I wanted to help them until the matter is settled and they continue their journey, and as for the dispensation, it is a forged and a forged stamp, and their contract is not 5,000 pounds, and they have a check for 30,000 pounds.”

He continued, “We want to end the issue in a friendly manner, and we are a club that does not have problems or disrupt the players’ career, and all the players have completed their procedures in the club and left, but only the trio remains, and it is only with us, but we filed a complaint with the trio in the Football Association.”

And he concluded, “Why did they get the full contract when they were relegated to the third section and did not participate with the team and we provided facilities for them, but they wanted to slander and we filed a complaint against them despite my admonishing them by agreeing to the club’s offer to obtain 50 thousand pounds.”

These were the details of the news FilGoal | News | in the second degree for this day. We hope that we have succeeded by giving you the full details and information. To follow all our news, you can subscribe to the alerts system or to one of our different systems to provide you with all that is new.