A source reveals to Masrawy the scenes of Mamdouh Abbas’s session... 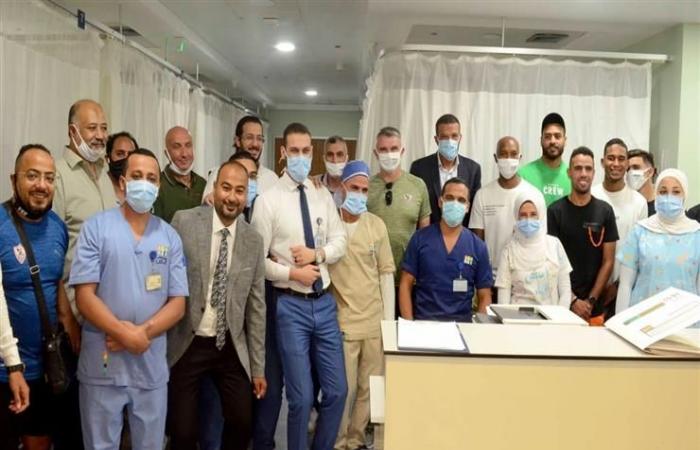 An official source in the Zamalek club revealed the scenes of the session of Mamdouh Abbas, the former president of Zamalek, and the players of Zamalek, in the presence of the French coach, Patrice Carteron, and Mahmoud Abdel Razek “Shikabala”, the team leader.

The pioneers of social networking sites shared photos of the former president of Zamalek and the players of Zamalek in a special session.

The official website of Zamalek indicated that the players of Zamalek and members of the technical and medical staff visited the “Al-Nas” Children’s Hospital to support and support patients and relieve them.

The source said in his statements to Masrawy, “There was an agreement related to the presence of the Zamalek players and the technical staff at the People’s Charitable Hospital in order to visit patients and photograph the visit for advertising matters related to the hospital to urge people to donate to patients.”

And he continued, “Mamdouh Abbas was in the hospital and was keen to hold a session with the players of Zamalek, in the presence of the coach.”

He continued, “The session also witnessed the presence of Osama Nabih.”

Osama Nabih recently announced his resignation from the technical staff of Zamalek Club due to the presence of many problems.

The source indicated, “Mamdouh Abbas spoke with the players of Zamalek about their conditions and the conditions of the team after winning the league championship.”

And he continued, “The former president of Zamalek assured the players that he knew that the coming period would witness a breakthrough regarding the financial dues crisis.”

He stressed, “The presence of a number of players from the Zamalek team, not all players, a number of players were invited to participate in the advertisement for that hospital, as well as Osama Nabih, the assistant coach, who was present after receiving an invitation some time ago.”

And the source confirmed, “Those who were present at that session received gifts from Mamdouh Abbas, as he is a man who loves the Zamalek club and a former president of the White Castle.”

He concluded, “The gifts are undeclared, they are gifts from a businessman who loves Zamalek and was also a former president of the club, and there is no crisis.”

Zamalek was recently crowned the Premier League champion for the first time since the 2014-2015 season.

These were the details of the news A source reveals to Masrawy the scenes of Mamdouh Abbas’s session... for this day. We hope that we have succeeded by giving you the full details and information. To follow all our news, you can subscribe to the alerts system or to one of our different systems to provide you with all that is new.