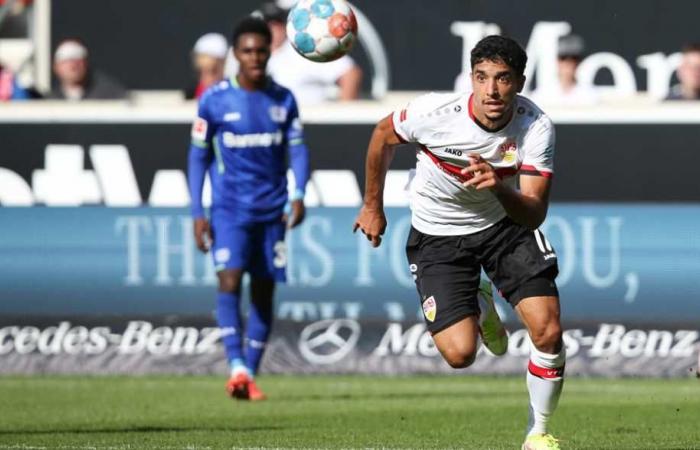 Stuttgart lost to its guest Bayer Leverkusen by three goals to one at the Mercedes-Benz Arena, in the fifth round of the German League.

The match witnessed the participation of the Egyptian striker Omar Marmoush from start to finish, a few hours after his first call to the ranks of the Pharaohs.

Stuttgart trailed in the second minute with a goal by Leverkusen’s Robert Andrich.

The visitors doubled the score with a second goal by Czech striker Patrik Szek in the 19th minute.

The turning point in the match occurred in the 32nd minute when Leverkusen’s Andrech received a red card.

Stuttgart then moved and sent Marmoush a cross in the 38th minute, which was met by his Greek colleague Konstantinos Mavropanos with a header that was blocked by the goalkeeper.

Immediately after that, Belgian Aurel Mangala of Leverkusen managed to reduce the difference to ignite the match.

In the second half, Marmoush scored a ball in the 54th minute from outside the penalty area, but it went wide.

Despite the numerical shortage, Leverkusen managed to add a third goal in the 70th minute through Florian Verts.

Marmoush tried again in the 79th minute with another shot that hit the post of Leverkusen.

Stuttgart’s balance freezes at 4 points in 14th place, while Leverkusen raised its score to 10 points in fourth place.

Marmoush participated in his second match with Stuttgart after scoring against Eintracht Frankfurt last week.

Marmoush will join the Egyptian national team in the upcoming international break for the first time in his career.

Marmoush is on loan from Wolfsburg after he spent the second round of last season on loan to St. Pauli in the second division.

These were the details of the news FilGoal | News | Marmoush participates in 90 minutes... for this day. We hope that we have succeeded by giving you the full details and information. To follow all our news, you can subscribe to the alerts system or to one of our different systems to provide you with all that is new.