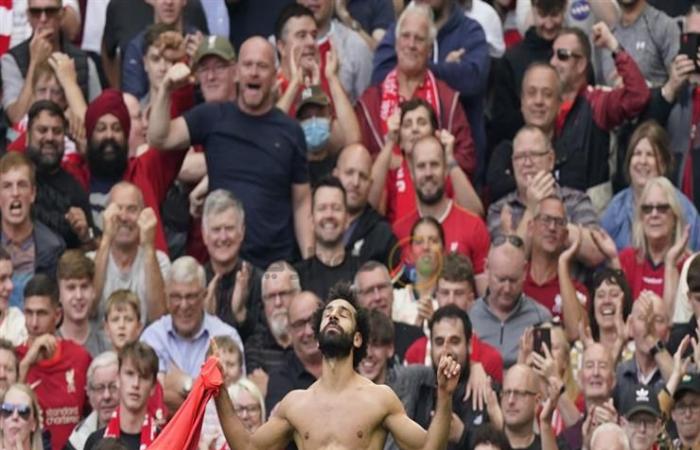 The record and exceptional numbers of Mohamed Salah, the Liverpool player, and his amazing performance on the field are no longer the only ones that attract attention to the “Egyptian King” in the English stadiums, everyone is paying attention to every detail of Mos life.

Mohamed Salah led his team to sweep Crystal Palace 3-0 in the fifth round of the English Premier League.

Salah’s achievement of the 99th goal in his career with Liverpool in the English Premier League, was not alone the most remarkable event, but the way Salah celebrated the goal and took off the Liverpool shirt and showed his body muscles attracted the most prominent attention from Liverpool fans and Salah fans.

In recent years, Salah is a model and ideal for anyone who wants to become an athlete closer to perfection, by maintaining himself, technical and physical development, and attention to every detail of his body in order to benefit from every muscle optimally.

The lenses of the cameras deployed in the stadium “Anfield” captured two muscles on the sides of Mohamed Salah’s chest that resemble the wings of birds, in an unusual scene for football players.

Salah won many praises through the pioneers of various social networking sites in light of his physical and physical development, as well as the exceptional numbers that he achieves match after match, amidst astonishment and confusion at the appearance of the “muscles” in this way.

Press reports dealt with comic comments by some followers, describing the matter as “club fingers”, or that someone hugs Salah from behind after the goal.

But the muscles that appeared in the pictures of Salah’s celebration of his goal against Crystal Palace are scientifically known as the “Serratus anterior muscle”, or “the anterior serratus muscle”, which connects the shoulder bones with the upper eight ribs.

According to many sources, the “serratus muscle” is the muscle that covers the outer surface of the bones of the rib cage, and its parts range from 8 to 10 muscles, and it reaches at its end with the end of the rib cage in the back.

Reaching the shape that appeared in Salah’s “frontal serratus muscle” requires hard work and strong training, as it has many advantages that help the athlete significantly improve his performance and abilities.

This muscle helps in reducing the load on the muscles of the legs with body weight, not straining the shoulder muscles, fixing the torso in an ideal position, and giving a larger rib cage space that allows better breathing and the opportunity to consume a greater amount of oxygen, which helps in increasing movement and energy.

These were the details of the news Report.. Salah’s “muscle” that surprised his followers for this day. We hope that we have succeeded by giving you the full details and information. To follow all our news, you can subscribe to the alerts system or to one of our different systems to provide you with all that is new.