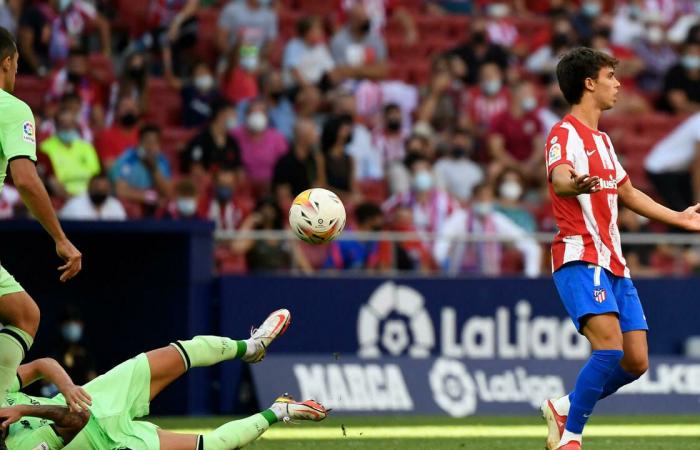 Atlético Madrid continued its shaky attacking performance and settled for a tie for the second time in four days at home, against Athletic Bilbao, with a score of 0-0 in the fifth stage of the Spanish Football League at the first stadium in “Wanda Metropolitano” on Saturday, in a match in which Portuguese striker Joao Felix was sent off after He came on as a substitute in the second half, and witnessed a new disappointing performance for his other French striker, Antoine Griezmann.

Atlético entered the meeting and shared the lead with Real Madrid and Valencia, but gave one of the two teams a golden opportunity to overtake him in the lead when they meet Sunday at the latter’s stadium in “Mestalla”.

Atlético leads temporarily with 11 points, one point behind Real and Valencia, who share second place with 10 points. Athletic Bilbao is currently fourth, with nine points.

This is the second draw for Atletico in four days, after Wednesday’s draw against Porto in the Champions League, which highlights the inability of Argentine coach Diego Simeone until the moment to find the appropriate offensive composition despite the presence of many illustrious names in the front line. He was satisfied with the match point against his rival Villarreal also last week in the local league, with a 2-2 draw with him.

– ‘Absolute confidence in his team’ –

Regarding the performance of his offensive team, Simeone replied, “I have absolute confidence in my team, and we will work to benefit as much as possible from the names we own, until we reach what we aspire to, which is scoring goals.”

Griezmann, who returned on loan to the team after his previous move to Barcelona, ​​was unable to score again in his third confrontations with the team since his return, knowing that he was booed by his team’s supporters in the match against Porto, before being replaced in the second half by former Barcelona striker also Uruguayan Luis. Soares. Amidst frustration at not scoring, Joao Felix prompted his nervousness and repeated objection to the decisions of referee Jesus Gil, and after he fired the ball angrily towards the stands and hit one of his team’s fans, the referee raised his second yellow card in the match, which led to his expulsion in the 78th minute.

The match witnessed wasted chances on both sides, which made the result of the match fair for both teams, as the meeting witnessed a physical struggle and desperation from the players on the field.

Griezmann had his best chance after 57 seconds of kick-off, but his ball passed over the goal, before he tried again with a cross pass, but he was unable to hit the goal.

Simeone pushed the quadruple Soares, Belgian Yannick Carrasco, Mexican Hector Herrera and Felix after an hour of the match, but all the Argentine coach’s attempts failed to win.

Athletic threw his weight in the match dates, trying to take advantage of the numerical shortage in the ranks of the hosts and got a strong chance to snatch the victory late when Asir Villaliber was alone with the Slovenian goalkeeper Jan Oblak, but his ball came far from the goal.

On the other hand, the former Atletico player, Radamel Falcao, turned back the clock and scored a goal for Rayo Vallecano, who beat hosts Getafe 3-0.

Falcao returned to the Spanish League eight years after his departure from Atletico to Monaco, when he was one of the most dangerous strikers in the world, knowing that he also defended the colors of the English clubs Manchester United and Chelsea and then Galatasaray.

Regarding Falcao’s first participation with the team, Rayo Valcao coach Andoni Irriola said, “He entered the match with the aim of helping the team and trying to integrate as quickly as possible.”

“He trained well, he certainly helped us and scored the goal that decided the match. We must continue to work with him. There are some ideas that he has to adapt to, but his current situation is very good.”

Rayo Vallecano is in eighth place in the overall standings with 7 points from 5 matches, while Getafe is in the last place without points.

These were the details of the news Spanish Championship: Atletico draw with Athletic Bilbao amid offensive blunders for this day. We hope that we have succeeded by giving you the full details and information. To follow all our news, you can subscribe to the alerts system or to one of our different systems to provide you with all that is new.