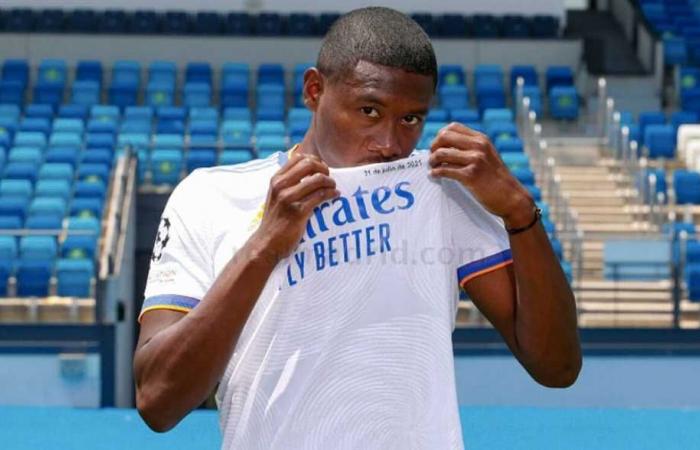 Real Madrid’s David Alaba stressed that he did not intend to provoke Bayern Munich or its fans by kissing the club’s crest while he was presented as a new player.

Alaba joined Real Madrid in the last transfer period on a free transfer after the end of his contract with Bayern Munich.

Alaba said in his interview with the German newspaper Bild: “It was a very exciting and emotional day. I was happy to finally arrive at Real Madrid, and I wanted to show my readiness to face a new challenge.”

He continued, “I did not want to provoke anyone by kissing the Real Madrid logo, nor to belittle Bayern Munich and the fans, I spent 13 wonderful years here, it was a very positive emotional.”

He continued, “I managed to develop as a person and as a player, and the fans always supported me and I will never forget them. I will respect the club and love it always. That will not change anything.”

Alaba spoke about obtaining Ramos’ number in Real Madrid, saying: “The number 27 that I wore in Bayern Munich is not allowed in Spain.”

He continued, “The club wanted me to wear the number 4, which is a legend and a role model on and off the field, but I, Alaba, do not want to be compared to other players, I want to write my own history with Real Madrid, and the most important thing is to perform on the field regardless of the shirt number.”

“I had a very good relationship with Rummenigge and still is, when I decided to leave Bayern Munich and take on a new challenge, I told him that I was doing this to develop myself as an athlete, I wanted to do something new, which is to understand that and he wished me the best.”

“I had a wonderful farewell, we were all at the Allianz Arena after the last match, I am very grateful to Bayern Munich not only in my career but in my life.”

Alaba participated with Real Madrid since the beginning of the season in three matches, during which he managed to make a goal.

These were the details of the news FilGoal | News | Alaba: I didn’t mean to... for this day. We hope that we have succeeded by giving you the full details and information. To follow all our news, you can subscribe to the alerts system or to one of our different systems to provide you with all that is new.