FilGoal | News | An iconic tower and many... 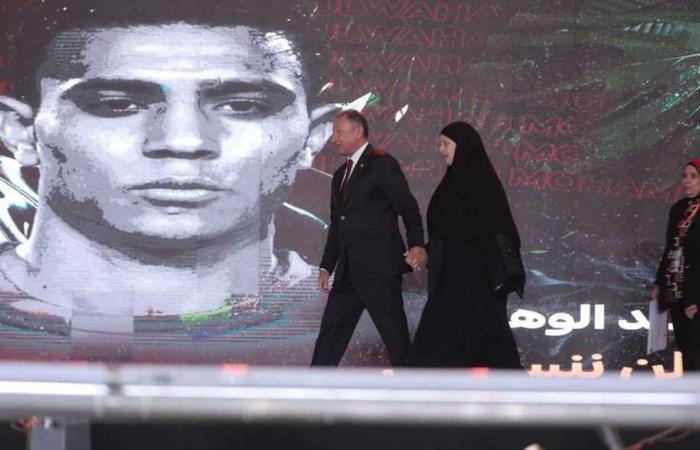 The ceremony witnessed the inauguration of an iconic tower of 10 stars, which lights up every day at ten in the evening, at the club’s headquarters.

The ceremony witnessed a speech by Mahmoud Al-Khatib, the club’s president, who said: “I thank Mahmoud Mukhtar Al-Titch, who is now standing in his court and his honorable family because he enriched himself and left many principles to Al-Ahly that we learned from.”

He explained, “I thank all the previous Al-Ahly councils. The first star we got was the club’s president, Saleh Selim, and then Hassan Hamdi’s council, who added many of the ten stars.”

He stressed, “Al-Ahly players from the current generation (men), were subjected to a lot of pressure, but they proved that they are very strong personalities, because despite all these circumstances, they achieved local, international and continental achievements.”

And he concluded, “I thank Sayed Abdel Hafeez, the director of football, and all the technical, administrative and medical staff. The players have always left a good impact in the hearts of the fans, by playing them in the spirit of heroism and the spirit of the red jersey. We wished the fans were with us at the celebration, but Coronas circumstances prevented that.”

Also, Ashraf Sobhi, Minister of Sports, was keen to congratulate the Al-Ahly club’s board of directors, saying, “Today is beautiful and bright. Greetings, respect and appreciation to the Board of Directors of Al-Ahly Club, headed by Captain Mahmoud Al-Khatib, and all the attendees.”

He continued, “I see Egypt’s football history present here at Al-Ahly’s celebration, all the congratulations and appreciation for the tenth star and this superiority at the African and Egyptian levels .. I convey my congratulations to all.”

Sobhi concluded, “He likes to focus on the part, which is that he will remain the poles of Egyptian football and excel for Egypt through these great successes. We are under one umbrella, the Arab Republic of Egypt. Sports excellence is an honorable thing for all of us and will always excel.”

As for Hani Abu Rida, member of the Executive Office of FIFA and CAF, he expressed his happiness at attending the Al-Ahly club celebration.

“All greetings to Al-Ahly club for its continental achievements. Al-Ahly is the bogeyman of Africa,” Abu Raida said on behalf of KAF president Patrice Motsebe.

These were the details of the news FilGoal | News | An iconic tower and many... for this day. We hope that we have succeeded by giving you the full details and information. To follow all our news, you can subscribe to the alerts system or to one of our different systems to provide you with all that is new.