The battle of numbers between Mohamed Salah and Ronaldo in the... 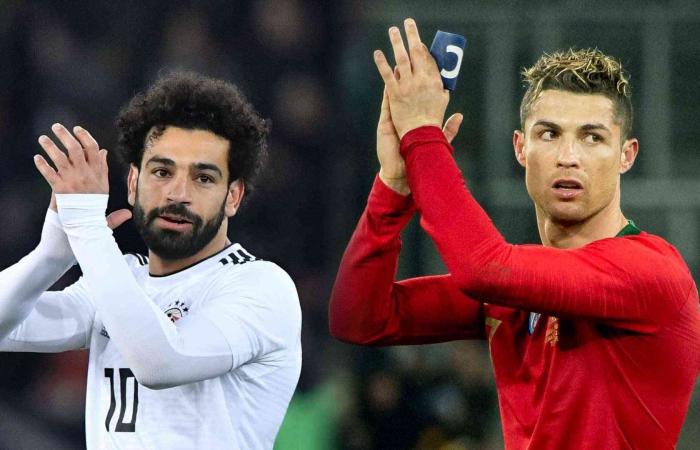 It seems that the conflict of numbers in the English Premier League has flared up early this season, especially between Mohamed Salah and Cristiano Ronaldo.

With his goal against Leeds United in the fourth round of the English Premier League, Mohamed Salah entered the 100 club in the competition, ranking fifth in the list of the fastest memberships.

Mohamed Salah scored his 100th goal in his 162nd match, the fifth best number in the history of the Premier League, preceded by only Alan Shearer, who achieved his number in 124 games, Harry Kane (141 games), Sergio Aguero (147 games) and Thierry Henry (160). match).

Although Cristiano Ronaldo, the star returning to Manchester United, has played 197 matches in the Premier League so far, he has not managed to reach Salah’s number, that is, he did not break into the 100 club.

With his two goals against Newcastle, Cristiano Ronaldo raised his scoring tally in the English Premier League to 86 goals, only 14 goals from entering the Hundred Club to win the 31st membership, but he may be preceded by Senegalese Sadio Mane of Liverpool, who scored 97 goals in 233 games.

Mohamed Salah had previously broken Ronaldo’s record as the player to score the most in one season in the Premier League, by scoring 31 goals in the 2007-2008 season, after the Egyptian scored 32 goals in the 2017-2018 season.

In the event that Cristiano Ronaldo enters the 100 club, the race between them will remain inflamed with the presence of Harry Kane, as the trio seeks to occupy advanced positions in the competition’s historic top scorer race, which is led by retired Shearer with 260 goals.

Cristiano Ronaldo used to break records, and his new challenge in the Premier League lies in chasing more numbers despite the difficulty of the competition, and he is over the age of 36.

Ronaldo managed to score in a Manchester United shirt in his first appearance this season, to achieve the second best number in the scoring difference between two goals in the tournament, after the difference between his last goals before leaving and his goal in Newcastle this season expanded to 12 years and 124 days.

The numbers of Mohamed Salah in the Premier League, and Cristiano Ronaldo in his entire career, indicate unlimited excitement this season in the English Premier League, between two football legends in their countries and their clubs.

These were the details of the news The battle of numbers between Mohamed Salah and Ronaldo in the... for this day. We hope that we have succeeded by giving you the full details and information. To follow all our news, you can subscribe to the alerts system or to one of our different systems to provide you with all that is new.