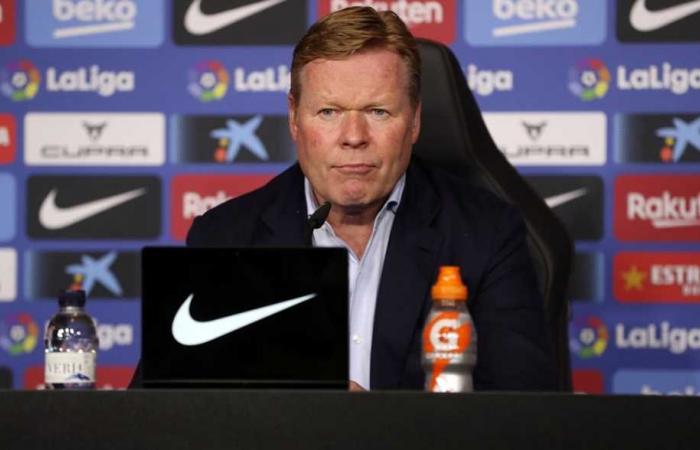 Barcelona coach Ronald Koeman stressed that the departure of Antoine Griezmann and Luis Suarez from the team came with his approval.

Griezmann left for Atletico Madrid on loan until the end of the season with the right to buy, and the club’s management compensated for his departure by signing Seville striker Luc de Jong.

Koeman gave an interview to the Spanish newspaper Sport, where he said: “I told the club that if they desperately needed to sell and get money, Emerson could be sold because we have Dest, Mingisa and even Sergi Roberto.”

And he added, “With Griezmann, it was the same with the arrival of the last day and the lack of a solution, Griezmann had a very large contract, and if he left, he would help improve the financial situation, which is why I agreed to his departure.”

Was the contract with Luc de Jong improvisational? “No, because I spoke with him since the beginning of August to study the possibility of including him, I wanted a different striker than I had and thought about him because I know him well.”

He continued, “In fact, I was asking how it is possible for Barcelona not to have a striker like him, who will give us more variables, especially for his capabilities in the air. I am very happy with his signature.”

Do you regret the departure of Suarez after his brilliance with Atletico Madrid and winning the league? “Sorry, no, Barcelona signed me to change some things in the team, and we thought that it would be positive if Suarez left, but we thought that his departure would have been for Juventus and not Atletico Madrid, but you should not regret a decision you made for the team.”

“Of course, I am open and excited to extend my contract and continue at Barcelona for many years, despite the difficult moments at the club, but I believe that thanks to our decisions, the coaching staff and the talents we possess, the club will have a very near and great future, and I hope to remain a coach in four or five years.”

He revealed, “I have high hopes for the return of Ansu Fati, I know him well and know what he can offer us, in any case you do not have to deal with him in a hurry, but by not taking risks, there is no need to rush and there is still a lot to work with, the same applies to Coutinho.”

What do you expect from Dembele? “First, that he extend his contract because it is his last year and it is important for him and the club to extend his contract. Dembele is a very good player if he is physically fine, has great speed and can play on both wings, when he recovers he will be a vital player for the team.”

Can you aspire to win all the titles? “We must be realistic, but I am very optimistic and ambitious.”

Barcelona has won seven points in the Spanish League since the beginning of the season, after winning two games and drawing one, to occupy fourth place in the table with a goal difference from first place.

These were the details of the news FilGoal | News | Koeman: I want to stay... for this day. We hope that we have succeeded by giving you the full details and information. To follow all our news, you can subscribe to the alerts system or to one of our different systems to provide you with all that is new.