In the absence of Ronaldo… Portugal returns from Baku with a... 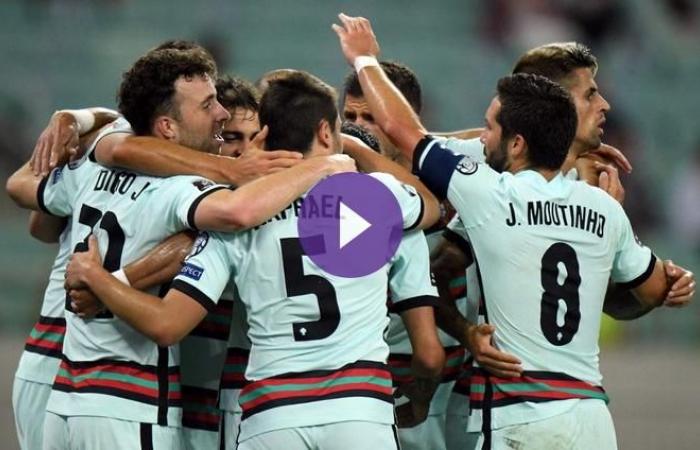 And after the competitions of this group began with a 1-0 victory over Azerbaijan in particular, Portugal tied with Serbia 2-2 last March, but returned and achieved three consecutive victories over Luxembourg (3-1) and Ireland (2-1), before renewing the victory on Tuesday. on Azerbaijan.

Coach Fernando Santos’ team, who conceded the European Nations title this summer by losing the final price at the hands of Belgium (0-1), topped the group, two points ahead of Serbia, who tied 1-1 away with Ireland.

Sergei Milinkovic-Savic scored 20 for Serbia, and scored for Ireland, Serbias Nikola Milenkovic, by an own goal.

Portugal leads the group with 13 points, followed by Serbia 11, Luxembourg 6.

Portugal played the match in the absence of Ronaldo, who last Wednesday added a new achievement to his personal tally after becoming the best scorer at the international level.

Since only the group leaders qualify directly for the finals, it is likely that the last round, scheduled for November 14, will be decisive for Portugal as it hosts Serbia.

The Portuguese national team completely dominated the meeting amid a defensive conglomerate for the host team, which is supervised by Italian coach Gianni De Biazi, and succeeded in opening the scoring in the 26th minute with a wonderful goal by Bernardo Silva, who received the ball from Bruno Fernandes with a long pass in the back of the defense, and caught it “on the fly” with a technical movement. Jamila left him from a very difficult angle and netted her with the help of the right post.

Fernando Santos’ men did not wait long to add the second when Bruno Fernandes played another long cross towards the right post, and Diogo Jota brought it to Andre Silva, who hit the net without any harassment from the defense (31).

The Portuguese continued their complete dominance, but the defensive bloc prevented them from reaching the net again until the 75th minute, when Jota added the third goal with a header after a cross from Joao Cancelo.

These were the details of the news In the absence of Ronaldo… Portugal returns from Baku with a... for this day. We hope that we have succeeded by giving you the full details and information. To follow all our news, you can subscribe to the alerts system or to one of our different systems to provide you with all that is new.