Live broadcast of Iraq and South Korea in the 2022 World... 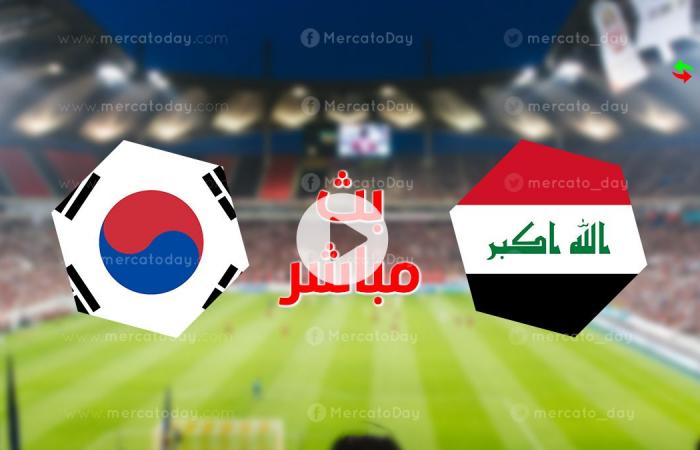 Mercato Day presents to you broadcast live A Yalla Shot link for the match between Iraq and South Korea in the 2022 World Cup qualifiers, about a continent Asia, at the opening of the third and final round, within Today’s matches Thursday, September 2, 2021.

South Korea national football team Iraq national team At Seoul Stadium, in a fiery match in the final stage of the 2022 World Cup qualifiers, within the first round of Group A, which includes the teams “Syria, UAE, Iran, and Lebanon”.

The whistle for the start of the Iraq and South Korea match will sound at 11:00 am GMT, 13:00 Egypt time, 14:00 Saudi time, under the management of the Bahraini international referee, “Nawaf Abdullah Shukrallah”.

and conveys broadcast live The match between Iraq and South Korea is in the last stage of the game 2022 World Cup Qualifiers On the fourth Iraqi channel, which is open on the Eutelsat 8 West A satellite, with a frequency of 11678 vertical, and a coding rate of 27500, with the voice of the commentator “Manaf Al-Hamidawi”, and it is also transmitted on the Saudi channel Ssc 7, with the voice of the commentator “Mohammed Al-Fami”.

Given the results South Korea national team In the current qualifiers, he is considered among the strong candidates to continue his journey and qualify for the 11th time in his history to the World Cup.

The Tigers did not know the taste of losing any match in the second stage of the qualifiers, and succeeded in scoring 22 goals, with only one goal conceded in 6 matches, as they advanced by 6 points against the second-placed Lebanon team, who also qualified for the final round.

The South Korean team holds the record for representing the continent of Asia in the World Cup finals, as it has reached the global wedding in all versions since 1986.

On the other hand, Iraq will seek to reach the World Cup finals for the second time in its history after the 1986 World Cup in Mexico.

Iraq reached the final round of the Asian qualifiers for the 2022 World Cup as one of the best teams that ranked second in their groups during the second stage, behind leaders Iran in Group C.

The Iraqi team did not lose any match during the second stage of the qualifiers, except in the last round against Iran, a result that was followed by the departure of Slovenian coach Srejko Katanic, and Dutchman Dick Advocaat took over the task in his place.

It is worth noting that the third and final stage of the Asian qualifiers for the 2022 World Cup will be held in two groups, with each group comprising 6 teams, and the first and second place winners from each group qualify for the World Cup directly.

The two third-placed teams from each group will meet within the Asian playoffs, and the winner will advance to the international playoffs, to determine the qualifier for the Qatar 2022 World Cup.

These were the details of the news Live broadcast of Iraq and South Korea in the 2022 World... for this day. We hope that we have succeeded by giving you the full details and information. To follow all our news, you can subscribe to the alerts system or to one of our different systems to provide you with all that is new.