Behind the scenes of the hot conflict between Al-Ahly and Zamalek... 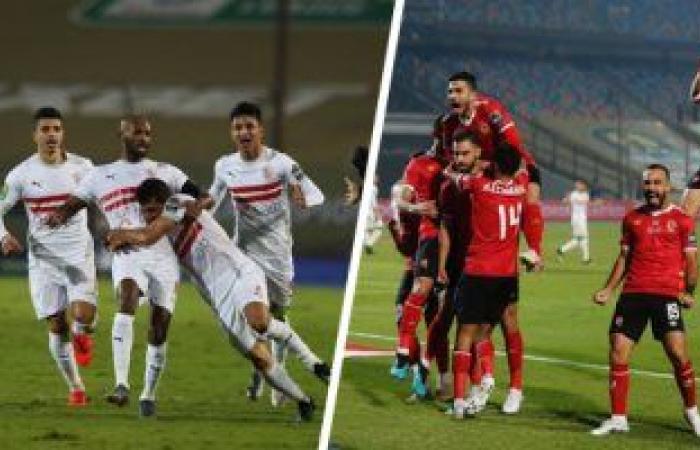 Al-Ahly rose to the top of the Egyptian League standings after beating Wadi Degla with two goals against a goal in the postponed match of the 22nd week of the General League competition, reaching point 61, equal in the number of points with Zamalek, but the red team excels in direct confrontations and goals as well, so there is no longer A talk that rises above the results of the last weeks of the competition, and who will be the champion of the league at the time, is it Al-Ahly or Zamalek, and is resorting to direct confrontations, goal difference or playing a playoff match, which we highlight in the following lines?..

Q: What are the goals of Al-Ahly and Zamalek in the league?

A: Al-Ahly, led by South African Betso Musimani, seeks to crown the league championship for the sixth consecutive season in the current edition of the competition, especially after its success in crowning the African Champions League for the second consecutive season and for the tenth time in the history of the Red Castle, while Zamalek is looking forward to crowning the 13th league in His history to compensate for his African failure two seasons in a row.

Q: How did Al-Ahly outperform Al-Ahly in direct confrontations with Zamalek?

A: Al-Ahly outperforms Zamalek at the top of the league with a difference in direct confrontations, after winning the first-round match with two goals to one and a draw in the return match with one goal for each team.

Q: What are the remaining matches for Zamalek in the league?

Q: What are the remaining Al-Ahly matches in the league?

A: Al-Ahly has 7 matches left with “Ceramica, Ismaili, Enppi, Talaa El-Gaish, Al-Masry Al-Portsaidi, El-Gouna, and then Aswan in the end.”

Q: What does the list of the Egyptian League say if two teams are equal in points?

Q: What will happen if Al-Ahly and Zamalek are equal in the number of points in the league at the end?

Q: What are the dates for the remaining Al-Ahly matches?

Q: What are the dates for the remaining Zamalek matches?

A: – The 28th round .. Zamalek against Ghazl El-Mahalla on August 7 at Alexandria Stadium at seven in the evening.

– The 29th round .. Ittihad of Alexandria against Zamalek on August 10 at Alexandria Stadium at nine in the evening.

– Round 30 .. Ismaily vs Zamalek on August 14 at Ismailia Stadium at seven in the evening.

– Round 31 .. Zamalek against Wadi Degla on August 17 at Cairo Stadium at nine in the evening.

The 32nd round… Ceramica Cleopatra against Zamalek on August 20 at the new Suez Stadium at nine in the evening.

The 33rd round.. Zamalek against El Entag El Harby Ahad on August 23 or 24 at Cairo Stadium.

These were the details of the news Behind the scenes of the hot conflict between Al-Ahly and Zamalek... for this day. We hope that we have succeeded by giving you the full details and information. To follow all our news, you can subscribe to the alerts system or to one of our different systems to provide you with all that is new.