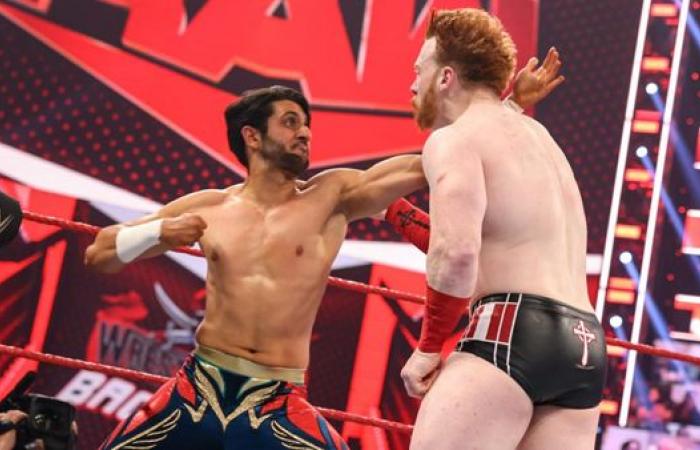 Jeddah - Yasmine El Tohamy - Saudi Superstar Mansoor said he feels “amazing” after being elevated to one of the WWE’s most high-profile and popular brands.

Last week, Mansoor signed to WWE RAW, a weekly show, in what was a huge step in his career to date.

Mansoor’s first match as an official member of the RAW roster saw him face the experienced Irishman Sheamus, and he is now looking forward to taking on some of WWE’s biggest names on a regular basis.

“It feels amazing,” said Mansoor, when asked for his thoughts on being promoted to RAW. “I’ve been on Super ShowDown, I’ve been on Crown Jewel, and those were big shows. But what I wanted most was to be consistent, and to be on a weekly program where I could show the world that I can perform every single week, not just once every few months.”

“Against Sheamus, with it being my first match (on RAW), it was a really good welcoming committee. There is nobody tougher than Sheamus. He’s probably one of the toughest men in the entire business, not just WWE.

“He loves to fight,” he added. “Even when I was hitting him with my elbows, I could feel the pain in my arm. He’s tough, he’s iron, and it’s important that I face people like that to challenge myself, and prove to the world, and the WWE universe, that I belong.”

Having earned a WWE contract after impressing at a tryout event in 2018, Mansoor’s rise to RAW has been rapid, and one which owes so much to the expert training he has received behind the scenes — along with good old-fashioned hard work.

“I’ve been training at the Performance Center in Orlando for about three years, and it’s been invaluable, the most essential experience I’ve ever had, to prepare me for this,” Mansoor said.

“The coaches are amazing, the facilities are amazing. I was lucky enough to be involved in matches on Main Event, wrestling guys like Drew Gulak and Angel Garza, getting experience with them.

“I didn’t know for sure if I was going to move up to RAW, I just knew that they wanted me to wrestle on Main Event to see how I did,” Mansoor said. “And then, on the day itself, I found out I was being signed to RAW. The preparation time was short, but in WWE anything can change at any time, so you always have to be ready.”

These were the details of the news Mansoor feeling ‘amazing’ after making step-up in WWE career for this day. We hope that we have succeeded by giving you the full details and information. To follow all our news, you can subscribe to the alerts system or to one of our different systems to provide you with all that is new.