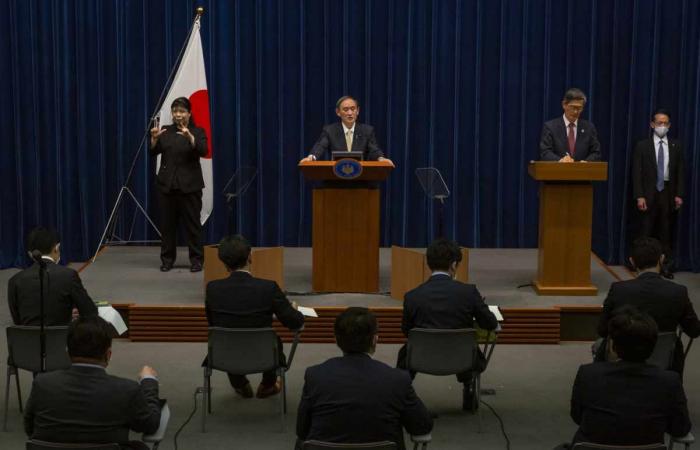 The nation’s virus outbreak remains much smaller than in many countries, but a recent uptick in cases has officials and medical professionals worried, even as the government and Olympic organizers insist this summer’s Games will go ahead.

“Today we decided to declare a state of emergency in Tokyo, Kyoto, Osaka and Hyogo prefectures,” Prime Minister Yoshihide Suga announced, citing the rise in infections involving new virus variants. The measure will run from April 25 to May 11.

“We have accumulated knowledge ... we have weapons called vaccines. I’m certain there will be an end to this difficult battle,” Suga said.

The measures will be tougher than Japan’s last state of emergency, imposed in parts of the country from January, but still far short of the harsh lockdowns seen in some parts of the world.

Authorities want bars and restaurants to shut their doors completely or to stop selling alcohol and close by 8 p.m., and to shutter major commercial facilities like malls.

The measure will coincide with the Golden Week holiday that is Japan’s busiest travel period of the year, and could involve cutting some public transport services to discourage movement.

Spectators will also be barred from sports events, which can continue behind closed doors, and remote working will be encouraged.

Although the measures start from Sunday, Tokyo Governor Yuriko Koike urged residents to start taking precautions immediately, including not gathering to drink in the street.

She even urged businesses to turn their lights off in the evenings to encourage people to stay away.

“After 8 p.m., we ask that bright signage on streets, neon signs and illumination be turned off,” she said.

“It will be dark at night, with only street lights on,” she added.

Japan has had some success containing COVID-19, with fewer than 10,000 deaths despite never imposing strict lockdown measures.

But cases surged over winter and have rebounded since the previous state of emergency was lifted in March.

Tokyo on Friday logged 759 cases, while Osaka recorded 1,162 new infections, slightly down on record numbers earlier in the week.

Authorities in Osaka have said health facilities there are overwhelmed and beds for seriously ill patients are running short.

Officials insist the situation will not affect preparations for the Games, with Tokyo 2020 chief Seiko Hashimoto telling reporters: “We’re not thinking about cancellation.”

“We’re thinking about how we can prepare in a way that prioritises safety and makes people feel it can be held safely, and makes them want it to be held.”

But the spike in infections is already disrupting everything from the Olympic torch relay — which has been forced off public roads in several regions — to test events and qualifiers.

Australia’s diving team on Friday withdrew from the Diving World Cup scheduled for May 1-6 in Tokyo, saying it was “not safe” to travel to Japan.

And Tokyo 2020 said on Friday evening that another part of the torch relay would take place without spectators, in Okinawa’s Miyakojima island.

Japan’s vaccine program is moving slowly, with just over 1.5 million people given a first shot and only around 827,000 fully vaccinated.

Suga said Friday that the country’s 36 million elderly residents should be vaccinated by the end of July.

“I’m for (the Olympics) in the sense that we need to keep the economy going,” 48-year-old Koji Yokoi told AFP in Tokyo.

“But when I see elderly people hospitalized on TV I say to myself, ‘This is not possible’.”

These were the details of the news Japan declares virus emergency 3 months before Olympics for this day. We hope that we have succeeded by giving you the full details and information. To follow all our news, you can subscribe to the alerts system or to one of our different systems to provide you with all that is new.