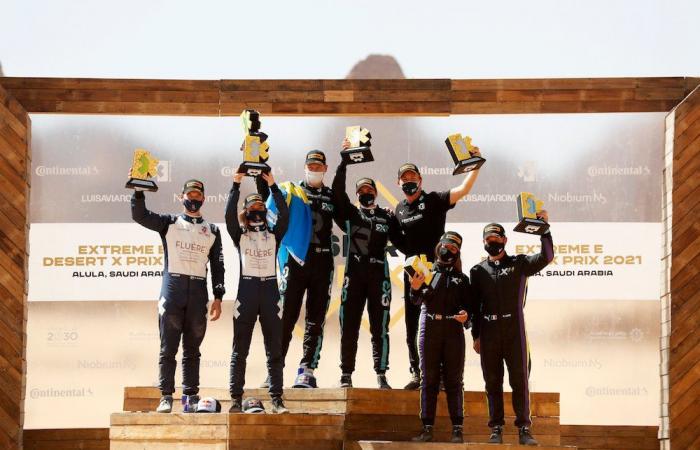 Jeddah - Yasmine El Tohamy - ALULA: Rosberg X Racing have won the inaugural Desert X Prix in the desert of AlUla to become the first team to claim a victory in an Extreme E event thanks to a masterclass of rally driving from Molly Taylor and Johan Kristoffersson.

The winners may have had a few technical issues over the weekend — not to mention a 60-second penalty in Saturday’s qualification that saw them drop from first to third in the standings — but when it mattered, the team delivered an almost faultless drive.

“I’m so thankful,” said an ecstatic Rosberg. “Thankful to Molly for driving so fantastically throughout the weekend, not a single mistake out there because the penalty was technical problem. She did a fantastic job. Molly was always the fastest out there so that was awesome. And also, Johan’s performance was really inspiring and amazing to watch.” He added that he “felt really proud watching them.”

Kristoffersson thanked his team for his and Taylor’s success, especially taking into account the earlier troubles.

“First of all, huge congratulations to the team,” the Swedish driver said. “We had some minor issues but we came here very well-prepared, which made our life so much easier out on-track. This sport isn’t only about the drivers; it’s about the team giving us the tools to do the job. With such a limited amount of track time, you need to have confidence that the car will do what you ask of it – and the Rosberg X Racing guys did an amazing job to give Molly and myself such a great car.

The Desert X Prix wrapped up the first of the five-event electric SUV series, which has been designed to raise awareness of change and with each locations highlighting a different environmental issue, beginning with Saudi Arabia and desertification.

“It was the first time we had experienced terrain like that, and on every lap, the course was changing – there were so many different variables to deal with,” said Taylor. “We just wanted to make the most of the little time we had in the car, every single kilometre.”

“You have to be fast when it counts, be smart when it counts and take the big moves when it counts, and for it to all come together when it mattered was really special, “ the Australian added. “Huge thanks to Johan, his opening laps were just insane, and the team has done such an incredible amount of work behind-the-scenes.”

Next up for the awareness-raising series will be Senegal (rising sea levels), followed by stops in Greenland (melting ice caps), the Amazon in Brazil (deforestation) and Patagonia, Argentina (glacial recession).

Saturday’s qualifying rounds had seen X44, ACCIONA Sainz XE Team and Rosberg X Racing finish as the top three, securing their passage into Sunday’s semi-final, from which the top two would qualify to the final. Andretti United, meanwhile qualified to the Crazy Race against Hispano Suiza Xite Energy Team, and Jenson Button’s JBXE, with winner getting a ticket to the final race

The results led to the teams led by former F1 rivals taking on Catie Munnings and Timmy Hansen, who had come major obstacles to get to that stage.

But as winners of the fan-led GridPlay vote, Andretti United had the luxury of choosing their starting spot for the Final. Hansen went for pole position on the right, with Kristoffersson lining up in the middle for Rosberg X Racing and X44’s Loeb taking up the third grid slot on the left.

Hansen had a flying start but after being overtaken by Loeb, there was only going to be one winner.

Munnings was delighted with the second place finish.

“I just don’t have the words, I’m smiling so much,” she said. “Timmy [Hansen] is my absolute hero, just a legend. His starts today have been incredible, which has made my job easy and all about bringing it home. With the puncture back at the beginning of Qualifying, who would have thought we would be here in second place now? The hard work paid off and we managed to turn our weekend around.”

The British driver also delivered a thumbs up for the new series, particularly as it has given female drivers as many spots places and equal driving time as their male counterparts.

“Extreme E offers an amazing platform for female drivers, and it’s super cool to be racing against such fast girls,” she said. “It’s been really nice to see everyone coming together, encouraging each other and creating a competitive environment, and all of us, men and women alike, have been learning on the job and having a great time while doing it.”

Alejandro Agag, Founder and CEO of Extreme E said he couldn’t have wished for better start for Extreme E.

“We’ve worked so hard on this for many years, and finally everything has come together this weekend,” he said. “It really has been beyond my wildest expectations. If I had written a script for the perfect weekend, I could not have come up with anything better than what we have witnessed these past two days. I’ve never seen such extreme racing in my life.”

With the Desert X Prix now done-and-dusted, the cars will be loaded back onto the St. Helena – Extreme E’s floating centrepiece – to set sail for Lac Rose in Senegal, the setting for the Ocean X Prix on May 29-30.

These were the details of the news Rosberg X Racing make history as first ever Extreme E winner after dramatic Desert X Prix in AlUla for this day. We hope that we have succeeded by giving you the full details and information. To follow all our news, you can subscribe to the alerts system or to one of our different systems to provide you with all that is new.