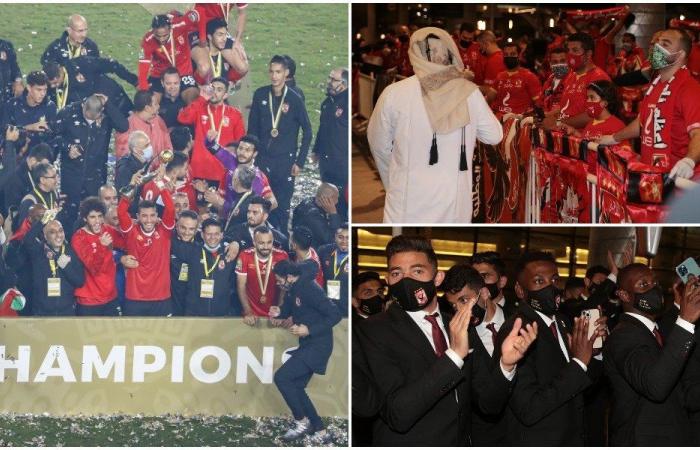 The winner earns a mouth-watering semifinal against the mighty Bayern Munich four days later, which means that while the final on Feb. 11 may seem far away, the South African boss is allowing himself to dream.

“Who thought that Leicester could win the Premier League? Anything is possible,” Mosimane, appointed to take charge of the Cairo giants in September, told Arab News. “If you ask any coach here, whether they are from South Korea or Germany, they will say the same thing: ‘We are in the tournament on merit and are here to win.’ Can we win? We are here to represent Africa and Egypt and we know what we can do but, of course, it will be very difficult.”

Even before a match with Bayern on Monday, Al-Duhail, champions of Qatar, will have to be seen off and Mosimane, who played for Doha club Al-Sadd in 1996, is wary.

“You know what Qatari teams are like, they are full of talented foreigners and they are a good team with a good attack. It will be a tough game but we are champions of Africa and this is a big positive. We will have our chances.”

The favorites to lift the trophy next week are, of course, the European champions.

“To beat Bayern is not easy. They beat Barcelona 8-2 and who are we to say that we could beat Barcelona? We will have fun and do our best. First, though, we have to focus on Al-Duhail and then dream from there.”

One advantage is the Egyptian population in Qatar. Capacity on Thursday at the new Education City Stadium may be reduced to 30 percent of its usual 45,000 seats due to COVID-19 restrictions, but there is sure to be strong support for Al-Ahly.

“We have fans everywhere and they are the 12th player for us,” said Mosimane, who led South Africa’s Mamelodi Sundowns to the 2016 tournament.

“You may have seen the videos but the reception we received when we arrived shows how special our fans are. It was unbelievable.”

While the 56-year-old has had some of the biggest jobs in South Africa, where he won five league titles from 2013-20 following a two-year spell in charge of the national team, Al-Ahly has still been an eye-opener.

“There is pressure in South Africa but this is something else and you have to get results.”

That he has done with no defeats in the 22 games since he arrived, a run that has seen him lift the Egyptian league and cup as well as the CAF Champions League — the first for the club since 2013. Despite that, there has still been criticism from some former players.

The latest came last week as former player Reda Abdel Aal said that the South African would not last more than one game in the Egyptian second division as he was a limited head coach.

“There will always be legends who played here who feel that you took the opportunity and say: ‘Why him and not us?’” Mosimane said.

“It is normal for ex-players to give their opinion. They played here and I did not, so you have to respect that. We won the cup, the league and the Champions League so it is not about who says what. In the UK, ex-players criticize Jose Mourinho and even Pep (Guardiola); this is part of football.”

Perhaps being from elsewhere in Africa makes it harder to be accepted.

“I am lucky to be the first foreign coach not from Europe or South America but Sub-Sahara. This is an opportunity, but the team asked for me, I did not apply. They had not won the Champions League for years but believed I could win it for them, and we won it thanks to the players, the fans and the club. I have the support of the club, and if others think they could do better, then they can have that opinion.”

Mosimane wants to concentrate on the coming game against Al-Duhail and hopefully Bayern Munich. “This tournament is very important and good for the club. We feel good about ourselves. We are here because we are the champions. We will go for it and see what happens.”

These were the details of the news Al-Ahly dreaming big at FIFA Club World Cup for this day. We hope that we have succeeded by giving you the full details and information. To follow all our news, you can subscribe to the alerts system or to one of our different systems to provide you with all that is new.