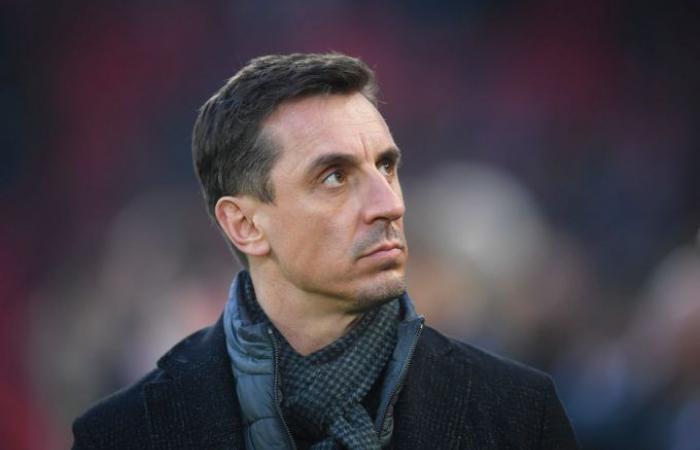 Thank you for reading the news about Former Man United captain: Salah among three world class players in Premier League and now with the details

Former England and Manchester United right back Gary Neville has expressed his impression from Mohamed Salah’s second goal against West Ham, stating that he is one of three world class players in English football.

Salah managed to end a six-match league run without a goal following a brace against West Ham United in a 3-1 victory for Liverpool at the London Stadium on Sunday.

The Egypt star scored a beautiful curler to break the deadlock for the Reds in the first goal, but it was the second goal that caught the headlines.

The brace cemented Salah’s position at the top of the league’s goalscoring chart with 15 goals, three ahead of his closest rival Harry Kane (12).

“You see the first goal – which is a really good goal – but it’s one of those you see quite often from Mo Salah, so you’re not out of your chair thinking it’s anything different,” Neville said on the Gary Neville Podcast.

“In fact, I’m thinking, ‘don’t let him back on his left foot!’, how many times do you see that as a full-back? The second goal is so, so good, it’s exceptional, it’s breathtaking.”

“We give the tag very rarely to people of ‘world-class’ and we do have some world-class performers in the Premier League.”

“That first touch and second touch was just something different, it was an unbelievable goal, one of the best goals I’ve seen certainly this season.”

The win over the Hammers moved Liverpool up to third place with 40 points, only four behind leaders Manchester City; however, the Citizens have a game in hand.

These were the details of the news Former Man United captain: Salah among three world class players in Premier League for this day. We hope that we have succeeded by giving you the full details and information. To follow all our news, you can subscribe to the alerts system or to one of our different systems to provide you with all that is new.