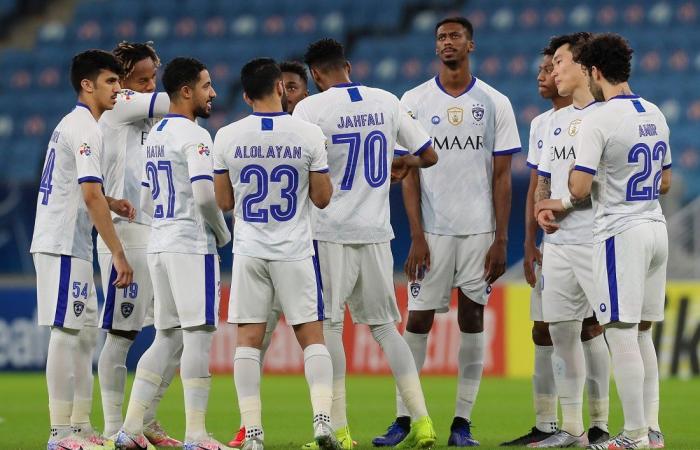 Jeddah - Yasmine El Tohamy - LONDON: While Al-Hilal will be satisfied with their group in the 2021 AFC Champions League that was drawn in Kuala Lumpur on Wednesday afternoon, Saudi Arabian counterparts Al-Nassr and Al-Ahli have work to do in order to progress to the knockout stages in a 2021 tournament that is a mix of the familiar and the new.

It is also tougher. This year’s edition has expanded to 40 teams, from 32 in 2020, for the first time, meaning that only the 10 group winners are certain of a place in the last 16, while just six of the best runners-up will join them.

Al-Hilal were placed in Group A along with United Arab Emirates league runners-up Shabab Al-Ahli, Istiklol of Tajikistan and the winner of a play-off between Al-Gharafa of Qatar and Uzbekistan’s AGMK.

When the action starts in April, the 2019 continental champions do however have some unfinished business.

In 2020, Al-Hilal defeated Shabab Al-Ahli 2-1, with star French striker Bafetimbi Gomis getting both goals, to book a place in the group stage.

The Riyadh giants were forced – however - to withdraw from the tournament after an outbreak of coronavirus swept through the team.

With the Dubai club mid-table at home and Istiklol making a first-ever appearance in the group stage of the competition, last season’s Saudi Pro League champions and this season’s leaders are strong favourites to take first place though that brings its own pressure.

“We will think about how to play against Al-Hilal later, but for now we are excited to face one of Asia’s biggest and best teams,” an official from Istiklol told Arab News following the draw.

“They have some excellent players and as this is our first time in the Champions League, Al-Hilal will show us how far we have come in our journey and how far we still have to go.”

Al-Ahli  in Group C face, on paper at least,  a tougher task. Al-Duhail, the reigning champions of the Qatar Stars League, will present formidable opposition and then there is Esteghlal of Iran.

Al-Ahli and Esteghlal met in the group stage last year and both progressed to the round of 16, winning one game each.  Iraqi champions Al-Shorta complete a solid group.

The Doha club, coached by legendary Barcelona and Spain star Xavi Hernandez have targeted the continental title this season and have the talent in former Spanish and Arsenal star Santi Cazorla as well as a number of Qatar’s 2019 Asian Cup winning team to go all the way.

Jordanian giants Al-Wehdat are making a first appearance in the group stage but there will also be some concerns on which team enters Group D from the play-offs.

Al-Ain of the UAE are a continental powerhouse and if the 2003 champions get past Foolad of Iran, no pushover either, they will add to Al-Nassr’s challenge.

The Riyadh club have been under-performing at home and will be keen for some success in Asia where they were Saudi Arabia’s best performers in 2020, reaching the semi-final stage only to lose on penalties to Persepolis of Iran.

The Tehran giants went on to lose to South Korea’s Ulsan Horangi in the final on Dec. 19.

Saudi Arabia will have four teams in the group stage if Al-Wehda defeat Al-Quwa Al-Jawiya of Iraq in a one-legged clash on April 7.

Fourth in the Saudi Pro League last season, the club from Mecca will enter a competitive-looking Group B containing UAE champions Sharjah, Tractor of Iran and Uzbekistan powerhouse Pakhtakor.

As well as the debate over which teams progress to the second round, it still remains to be seen where the games will be played.

In 2020, the group stage was suspended in March and resumed only in September with all remaining games played in the ‘bio-secure hub’ of Qatar.

With COVID-19 still going strong in many parts of the world and with travel restrictions just as strict as before, there will be no home and away clashes with the Asian Football Confederation (AFC) deciding to allocate games in centralised hub cities.

Venues have yet to be confirmed though Arab News understands Saudi Arabia, UAE and Qatar are ready to host games in West Asia though the AFC is still looking for eastern members to step forward.

The group stage in West Asia, for practical purposes the tournament is divided into two geographic zones until the final, will take place from April 14-30 with the knockout stages kicking-off in September.

These were the details of the news AFC Champions League draw gives first insight into new bigger tournament for this day. We hope that we have succeeded by giving you the full details and information. To follow all our news, you can subscribe to the alerts system or to one of our different systems to provide you with all that is new.