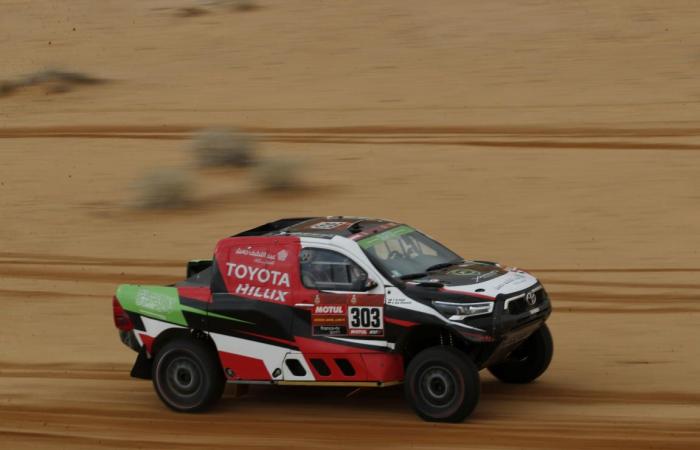 Jeddah - Yasmine El Tohamy - SAKAKA: Toyota’s Saudi driver Yazeed Al-Rajhi took the Dakar Rally marathon seventh stage honors on Sunday, the home hope denying Stephane Peterhansel, who nevertheless stretched his lead as he pursues his 14th title.
Mini driver Peterhansel was on target to cross the line first at the end of the arduous 453km timed special featuring sand mountains between Ha’il and Sakaka.
But Al-Rajhi had other ideas, and with the benefit of his experienced co-driver Dirk Von Zitzewitz, an 18-Dakar veteran, he took command around 100km out.
He secured his first stage win in the event since 2015 and his Dakar debut with 48sec to spare over Peterhansel, with Carlos Sainz third at 1min 15sec.
In fourth came Qatari Nasser Al-Attiyah, who is now 7min 53sec behind Peterhansel in the overall standings with last year’s champion Sainz over 40 minutes adrift in third.
Peterhansel, 55, first competed in the Dakar in 1988, the year leader Ari Vatanen’s Peugeot 405 was infamously stolen in Bamako, with a ransom for its return demanded. It turned up eventually, but too late for Vatanen.
Since then Peterhansel has made motorsport’s toughest test an annual pilgrimage, and with 13 wins on both two and four wheels he has rightly earned his nickname ‘Monsieur Dakar’.
He now has six podium finishes in seven stages in 2021 and will be hoping to get his first win of 2021 on the board on Monday’s eighth stage which sees the Dakar traveling circus heading west from Sakaka to the Red Sea resort of Neom.
In the motorbike category, defending motorbike champion Ricky Brabec took the seventh stage win in a time of 4hr 37mins 44sec.
The American, winner of the prologue, came in 2mins 07sec clear of Honda’s Chilean rider Jose Ignacio Cornejo, the new overall leader.
But only by one second from Toby Price (KTM) with Sam Sunderland, the British 2017 champion, in third at 2min 11sec.
Overnight leader Xavier de Soultrait slipped to fourth, 2min 34sec off the pace.
Brabec is up to eighth, but still almost 15mins behind.
“There’s five days left and we’re gonna try just to finish in the top 7 every day and see if we can make up a little bit of time,” he said.
Botswanan Ross Branch suffered a spectacular spill from his Yamaha early in the stage but thankfully escaped uninjured.
The seventh stage was coming to a close as the death was announced of Hubert Auriol, the first man to win on both motorbikes and cars.
Auriol, 68, who died after a long battle with heart disease, went on to manage the Dakar from 1995 to 2004.

These were the details of the news Saudi Al-Rajhi denies ‘Mr Dakar’ on marathon stage for this day. We hope that we have succeeded by giving you the full details and information. To follow all our news, you can subscribe to the alerts system or to one of our different systems to provide you with all that is new.