Carlos Sainz: Russell shows that not only Hamilton can win in... 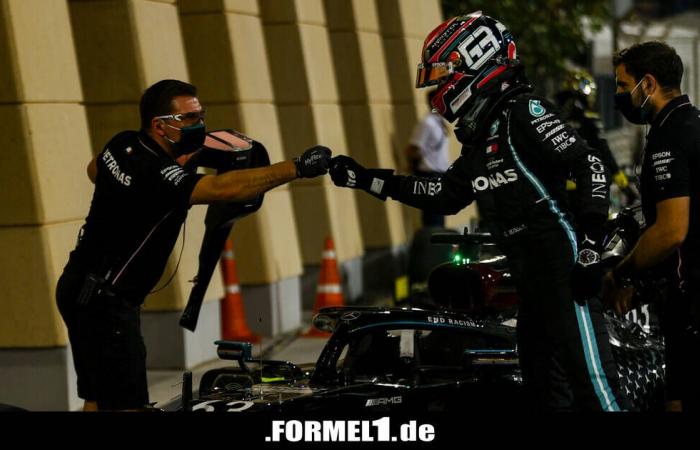 (Motorsport-Total.com) – “I’m not surprised,” says Carlos Sainz of George Russell’s performance. In his first qualifying for Mercedes, the Briton finished second and was only 0.026 seconds behind team-mate Valtteri Bottas. “In my prediction, George was always very close to Valtteri, so this is no surprise.”

The front row of the grid is of course grist to the mill of the critics who say that anyone can win in a Mercedes. “If you want to win a championship, you have to sit in a Mercedes,” emphasizes Lando Norris. “I think a lot of drivers could do something similar and Valtteri or even Lewis [Hamilton] declare war. “

Norris doesn’t want to diminish Russell’s performance, nor that of Lewis Hamilton, who usually sits in the car, but he is convinced that all Formula 1 drivers can move a car quickly. “Maybe it’s just a car that suits George and probably many others too. It’s one of the easiest cars to drive in the grid because it’s so good.”

Russell shows the problem of Formula 1

The Englishman knows that people would never assume that Russell is as good as Hamilton – simply because he is driving for the back seats at Williams. And that is currently the problem for the McLaren drivers in Formula 1.

“If someone who fights for 15th place every weekend is put in a winning car and is 20 thousandths away from pole, then for me that only shows what Formula 1 is currently lacking,” says Sainz. “We could have an amazing show if you show more how even the field is and if the driver can make a bigger difference.”

“Unfortunately, it is currently the case that the team and the car are very important. We have so much talent in the field that all drivers could be in qualifying within three tenths of a second,” said the Spaniard. Instead, the top and bottom of the field are often separated by more than two seconds.

Sainz also emphasizes that switching to a new car isn’t all that difficult for a driver. At least he found the switch from Toro Rosso to Renault quite easy in the middle of the season. “I already found the limit of the car in my first qualifying. It is not difficult to be fast with a car that you do not know – at least as a Formula 1 driver.”

Russell also helped that the outer circuit of Bahrain is quite short and only includes four braking zones. “When we come to Abu Dhabi, it can look very different,” says Norris. “Here it is probably easier for a driver to get into a new car and do something special.”

“But what would be interesting: If George were to be in the car next weekend in Abu Dhabi – whether it would be the same story, whether he would be faster or whether he would have problems because he doesn’t know the Mercedes as well as Valtteri,” said Norris continues.

Because squeezing the last two tenths of a second out of the car is a great art – and something that Lewis Hamilton is particularly good at. “If you give George another year in the Mercedes, then I’m sure that he can still find lap time and make the car more suitable for himself,” says Sainz.

“He’ll get better and better with it. It is difficult to say whether it will be on a level with Lewis. I think Lewis is the best driver in the field and one of the most talented in history,” said the Spaniard. “But we’ll never know because there are only two Mercedes in the field. And that’s my point.”

These were the details of the news Carlos Sainz: Russell shows that not only Hamilton can win in... for this day. We hope that we have succeeded by giving you the full details and information. To follow all our news, you can subscribe to the alerts system or to one of our different systems to provide you with all that is new.