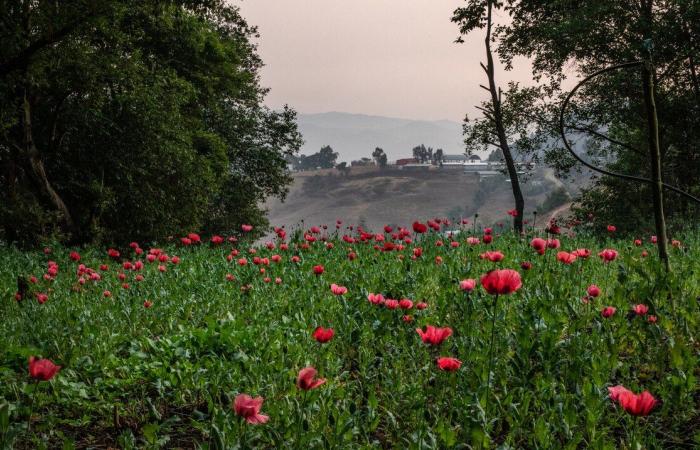 Mexico City – Tiger cubs and semi-automatic weapons. Piles of banknotes and armored cars. Poppy fields that are watered to the sound of songs that extol the culture of the cartels of drug trafficking Mexicans.

This is the world of TikTok Cartel, a genre of videos showing drug trafficking groups and their activities that garners hundreds of thousands of views on the popular social media platform.

But behind the narco tinsel and gang members’ dancing lies a sinister reality: While Mexico is once again about to break homicide records this year, organized crime experts say the TikTok Cartel is just the latest propaganda campaign. designed to mask the bloodbath and show promise of infinite wealth to attract young, disposable recruits.

“It’s narcomarketing,” he said Alejandra Leon Olvera, an anthropologist at the University of Murcia in Spain who studies the presence of organized crime groups in social networks. “They use this type of platform to advertise themselves, but of course, like this hedonistic advertising.”

In Mexico, the content of the cartels has circulated on social networks for years; This month it began to flood TikTok channels in the United States after a segment of a speedboat chase went viral on the video-sharing platform.

The video water chase appeared for American teens on its For You page, which recommends videos to users that they might find interesting. Millions of users “liked” and shared the segment. His clicks caused the video to go up in the For You section algorithm, which made more people watch it.

And once they had seen the chase by boat, the algorithm began to offer them segments that seemed to originate from drug trafficking groups in Mexico, first by dripping and then in a big wave.

“As soon as I started liking that video of the boat and then there were videos of exotic pets, videos of cars,” said Ricardo Angeles, an 18-year-old TikToker from California interested in cartel culture.

Others also began to notice the wave of cartel videos and post reactions to the flood of guns and luxury cars that appeared on their news channels.

“Did the cartels just launch their TikTok marketing strategy?” Asked a puzzled user in a video viewed some 490,000 times. “Did the coronavirus hurt all of you?”

When asked about the policy regarding videos, a TikTok spokeswoman said the company was “committed to working with law enforcement to combat organized criminal activity” and that it removes “content and accounts that promote illegal activity. ”. The cartel videos that were submitted to TikTok for the company to comment on were soon removed from the platform.

Although for most adolescent TikTokers the content of the cartels may be novel, the online representation of the narcoculture is more than a decade old, when Mexico began to redouble its bloody war against those gangs, according to Ioan Grillo, author of The narco: in the heart of the Mexican criminal insurgency.

At first, the videos were violent and explicit: images of beheadings and torture that were uploaded to YouTube in order to frighten rival groups and to show government forces the cruelty they faced.

In July, a video that was widely circulated on social media showed members of the violent Jalisco Nueva Generación Cartel in combat clothing, holding heavy-caliber weapons and rooting for their leader alongside dozens of armored vehicles marked with the initials CJNG.

This show of force appeared online at the same time as the president Andrés Manuel López Obrador he was visiting the states that constitute the cartel’s stronghold.

“It’s like a kick, like a blow to the stomach to the government’s security strategy,” Grillo said.

López Obrador, whose campaign promised to confront crime with “hugs not bullets” has so far failed to significantly impact violence in the country, which last year alone recorded 34,582 homicides.

But while some videos are still produced to spread terror, others are made to show young people in the Mexican countryside the potential benefits of joining the drug trade: infinite money, expensive cars, beautiful women, exotic pets.

“It’s about the dream, it’s about chambing him,” said Ed Calderon, a security consultant and former member of the Mexican security forces. “That’s what they sell.”

According Falko Ernst, a senior analyst for Mexico at the International Crisis Group, a global think tank, some of the TikTok videos could be produced by the cartel members themselves, especially young hit men eager to show off their spoils of war.

Still, he said, most are likely to be recorded by lower-ranking young operators in the groups and then circulated widely on the internet by friends or those who aspire to that lifestyle.

But whether it’s the cartels or just the would-be gangsters who produce and share them, the ultimate goal is the same: to attract an army of young men willing to give their lives to get closer to glory.

Gangs, Ernst said, depend on this “sea of ​​youth.”

Although videos of gemstone guns and modified cars have circulated on Instagram and Facebook for years, TikTok has given a new dimension to the genre of narcoculture.

“The message has to be fast, it has to be attractive, and it has to be viral,” said León, the anthropologist. “Violence is fun, or we even put music on it.”

One video, which drew more than 500,000 likes before it was removed, shows a farmer slicing green seed pods in a poppy field, apparently to harvest the resin from which heroin is produced.

In another video, from a now-deactivated account called El clown del CJNG, in reference to the Jalisco cartel, a figure dressed in black with a bulletproof vest and an AR-15 rifle does a dance move known as the Floss.

Although the videos are aimed at an audience in Mexico, for users in the United States who help promote them they exploit a growing popular fascination with the cartel world, one that shows like Narcos Netflix have spread.

In part, that was the appeal to Angeles, the California teenager, whose parents migrated from Mexico before he was born.

While acknowledging the actual violence behind the videos, Cartel TikTok has become a way to connect with Mexican popular culture from a safe distance.

“There is a difference between looking Narcos and have one kidnap you, ”Angeles said.

The videos are also a cruel reminder of the life she might have had if her parents hadn’t looked for better opportunities across the border.

“I could have been in that lifestyle,” Angeles said. But “I’d rather be penniless and nameless than rich and famous.”

These were the details of the news Mexican cartels invade TikTok for this day. We hope that we have succeeded by giving you the full details and information. To follow all our news, you can subscribe to the alerts system or to one of our different systems to provide you with all that is new.