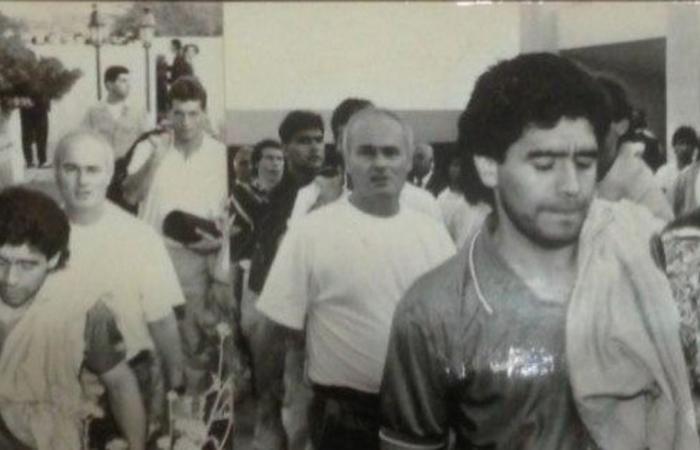 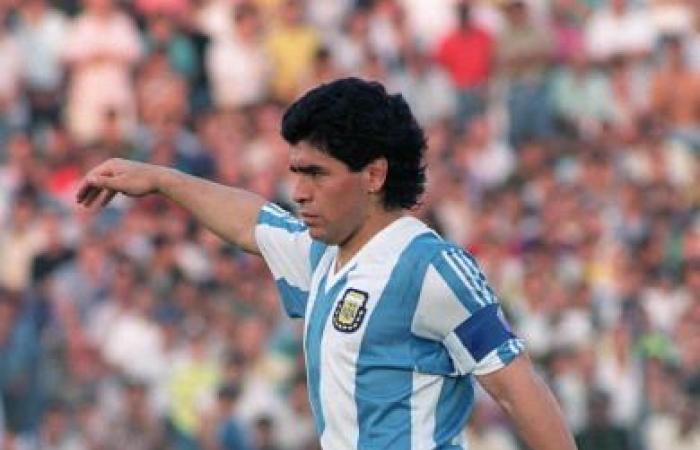 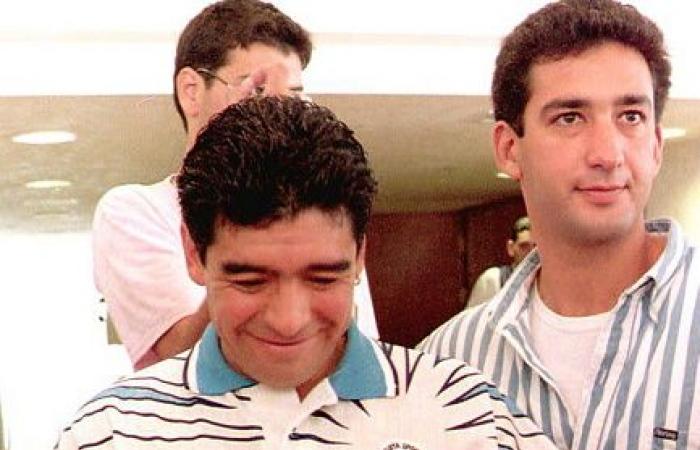 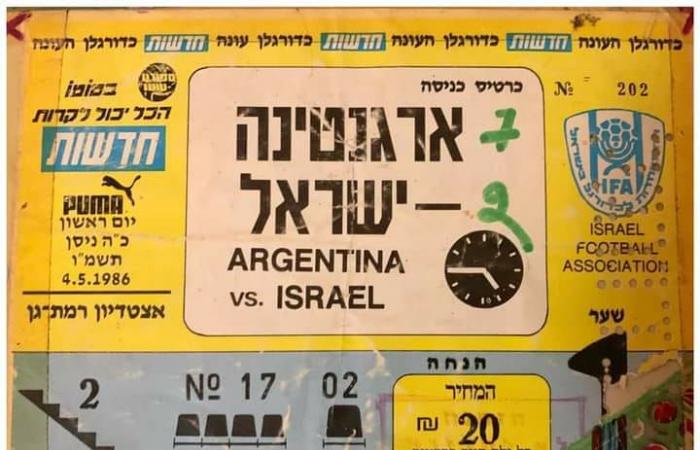 I was very sad to hear on Wednesday about the 60-year-old death of Diego Armando Maradona, Argentina’s memorable number 10. The news of his departure brought me back to a close stay with the Argentina national team and Diego Maradona in May 1990, when I was a sports reporter for the newspaper Hadashot HaShalom.

“News” organized, as was the custom in those days, the Argentina national team’s visit to Israel. This is the 1986 world champion led by Diego Armando Maradona. The Argentina team with Maradona visited here before the 1986 World Cup, defeated the Israeli team mercilessly 2: 7 and from here set out to bring the World Cup, through the “Hand of God”. In Argentina, the visit to the “Holy Land” was seen as a lucky visit to win the 1990 World Cup in Italy.

The Argentine team landed in Israel after a short tour of Europe and established its base at the Acadia Hotel in Herzliya. The editor of the sports section, Eliezer Lahana, and his assistant Doron Cohen, appointed me to be close to the Argentine national team – an appointment that passed the heads of the Argentine delegation. I was given a free pass badge and within a few hours I was considered one of the Argentine national team. The big name, of course, was Diego Maradona, who brought his wife and two young daughters to visit Israel, a move that was reserved exclusively for number 10.

The first Argentine player with whom I was able to create a relationship of quick intimacy was the brakeman Jose Luis Brown, who a few Argentine journalists who managed to get into the hotel told me was Maradona’s best friend. Brown also knew how to speak English, while most Argentine players preferred to speak only Spanish. Brown asked me who besides Maradona I know and I mentioned the name of the king of the 1930 World Cup goals in Uruguay, the Argentine Guillermo Stabila.

Brown was enthusiastic and replied that Stabila is a World Cup legend in Argentina and has also previously coached her national team. I walked next to Brown to the wonderful pool, where everyone made room for Maradona and his family’s happy hour. Really a private pool of number 10. Maradona and his wife received an explanation about me, as someone who in addition to being a journalist is also a contact for the organizers of the visit. Maradona offered me orange juice and uttered a number of sentences I did not understand, which caused bursts of laughter. For two days I did long hours with the Argentina team, full of experiences and stories that are kept in my heart about the Maradona plots.

And of course there was also a game on May 22, 1990 against the Israeli team – about fifty thousand spectators filled the Ramat Gan stadium in a game in which Argentina defeated Israel 1: 2 from goals by Maradona and Claudio Caniga to the net of Shuli Gilardi, and Israel scored the honorable goal Tal Benin.

At the end of the game, I said goodbye to the friendly Argentina team and hurried home, but at 03:00 in the morning, the phone woke me up and here the story goes to one of the two editors of the Maariv newspaper, Doron Cohen Recalling that night: “I closed the sports section of ‘News’ and we were looking for a headline for the day after leaving Argentina, a headline. We organized for the Argentine team a visit to Jerusalem at the Western Wall and the Church of the Holy Sepulcher the day after the game. “Egged Cooperative. The senior officials in the system did not know who to send and I suggested that Asher Goldberg go on Operation Maradona. It was three in the morning and from my acquaintance with you I knew I could call at any hour. Indeed, with the first ring you answered me.”

“I asked you to save the newspaper and be in Dan Acadia at 07:00, to be responsible for the Argentine visit to Jerusalem and from there to Ben Gurion Airport,” Cohen recalls. “You agreed and the system rejoiced. “In agreement with you to develop your photos with Higita and Valderama from the visit of the Colombian team. I promised that from now on every photo of you with the celebrities, I am responsible for the development, you excuse and promise huge stories and a picture of Maradona at the wheel of the bus.”

And now back to Argentina’s trip. Near the hotel, a luxurious Mercedes bus was waiting, the driver was Kobi Zeituni (Oren’s father), a former player of Hapoel Holon, Hapoel Tel Aviv and the Israeli team. We joined the Argentina national team breakfast, at their request, and I served Maradona’s daughters a number of toys from my three daughters’ birthdays, toys that never opened. The Argentinians were in no hurry, still went down for a refreshing dip in the pool and I took advantage of it, along with a Spanish-speaking friend I took with me, and again found a place near Maradona who was having fun bouncing a ball in the seat.

I was asked to try to bounce like him, but out of excitement I was able to bounce only nine times on the leg and knee. At around 11:00, Zeituni started the bus that began to board Jerusalem. I sat down on the bench next to Maradona, who sat his daughters next to him and his wife next to Kenija. Already at the beginning of the trip Maradona arranged the bus for the tremendous singing he led and for his solo songs. He asked for explanations on the way to Jerusalem and talked about the luck of the Holy Land on the way to another safe World Cup win.

While still in Herzliya, I called senior police officer Natan Kremansky, whom I knew as a Hapoel Jerusalem reporter from the YMCA field. I was asked to arrive at the Russian compound, where police officers would be waiting for me to secure the visit. Before arriving in the capital, we stopped for lunch at Bnei Dagim and Maradona, who was the last to get off the bus, asked if he could drive a bit on the bus. It was made clear to him that it was complicated, but Maradona hurried to sit at the wheel, turning it as if he were driving and the easily obtained pictures I obtained. I also explained to Diego that the driver is an outstanding past player, including in the Israeli team, but Diego could not understand and the interpreter could not convince him how it could be that the driver is a famous football player in Israel.

At the Russian compound, the police and border guards who accompanied the bus waited as promised. The first destination was the Western Wall, where the Argentines were told the historical story. They all received cardboard domes, sheets of paper and stationery and wrote their heartfelt requests on them. Maradona, with one of the girls in his arms, carried a silent prayer and pushed the folded note into one of the cracks in the wall, like the rest of his friends.

Curious crowds were dragged after the Argentine delegation, with police officers denying access to the enthusiastic crowds. Maradona and his friends marched on the main souvenir street and bought various souvenirs from Jerusalem, mainly Christian symbols. The visit to the Church of the Holy Sepulcher was especially exciting during which Maradona and his friends touched every monument and wall and kept crossing. When Maradona knelt and said a prayer, everyone did. When Diego was asked what he wanted at the Western Wall and the Church of the Holy Sepulcher, he replied: “Happiness for the people of Argentina, health and winning the World Cup.”

Maradona also said that to walk and tread in the place where Jesus walked, is an infinitely great happiness for him. I asked my friend to tell Maradona that a visit here would lead to Argentina winning the World Cup final 0: 2, Diego smiled and replied that we would be his guests at the celebrations in Buenos Aires if that happened. The road back to Ben Gurion Airport passed quickly and the 1990 model visit to Argentina ended.

As is well known, Argentina did not win the World Cup in Italy, but I managed to get a picture of Maradona on the wheel of an Egged bus. In addition, one of the members of the delegation gave me a ball from Argentina, which I donated a few years later. The memories from Maradona will not be forgotten and I will not tell them all, because silence is beautiful in the shadow of the memory of the greatest footballer in the world.

These were the details of the news Diego Maradona: The journey in Israel and the note there at... for this day. We hope that we have succeeded by giving you the full details and information. To follow all our news, you can subscribe to the alerts system or to one of our different systems to provide you with all that is new.