Killian Hayes picked his Pistons number, the reasons behind 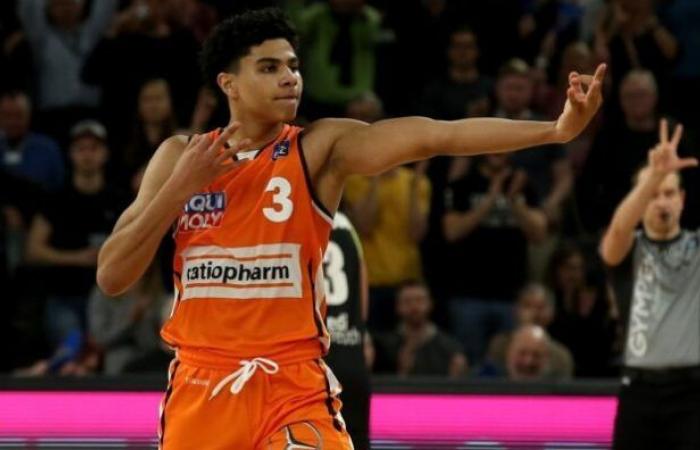 Killian Hayes joined the NBA big family a few days ago and more particuquite that of the Pistons. He still has a few details to work out before wearing the Motor City jersey for the start of the season, starting with the number on the jersey. He seems to have made his choice.

Only a few more weeks of waiting before seeing Killian Hayes make his debut on the NBA floors. The highest drafted Frenchman in the history of the big American league is about to make his entry into the big leagues, after a promising start to his career in Europe.

While waiting for the opening of training camp and the start of the new season, Hayes still has some things to do. Among other things, he must choose his number, the one with which he will defend the colors of Detroit and sell his first NBA jerseys. The French chose, and it is far from being a trivial number.

Killian Hayes will wear the No. 7 for the Pistons.


Cut by the Hornets, a first trend on the future of Nicolas Batum

It is therefore by wearing the n ° 7 that Killian Hayes will make his first entry on an NBA field! Having been drafted in 7th position by the Pistons (the highest place for a French player), no need to look very far for the reason for this choice. In addition, his father DeRon also wore this number a few times, although it was with the 14 that he made most of his career in France.

Hayes thus joins other compatriots who have made the same choice, namely to wear the number in reference to their draft, such as Rudy Gobert (n ° 27, Draft 2013) or even Ian Mahinmi (n ° 28, Draft 2005). A way like any other to never forget where it all began.

So far, the young Frenchman has always worn the No.3, whether in Cholet or Ulm. This choice was obviously impossible in Detroit, the number having been withdrawn in honor of the immense Ben Wallace, NBA champion in 2004, quadruple defenseman of the year, and incidentally best undrafted player of all time.

All the elements are gathered so that we can imagine the entry into the running of Killian Hayes in the league, while waiting the first announcement by the announcer of the Little Caesars Arena.

*The article has been translated based on the content of Source link by https://www.parlons-basket.com/2020/11/22/nba-killian-hayes-a-choisi-son-n-aux-pistons-et-cest-lourd/
. If there is any problem regarding the content, copyright, please leave a report below the article. We will try to process as quickly as possible to protect the rights of the author. Thank you very much!

These were the details of the news Killian Hayes picked his Pistons number, the reasons behind for this day. We hope that we have succeeded by giving you the full details and information. To follow all our news, you can subscribe to the alerts system or to one of our different systems to provide you with all that is new.