NBA Draft 2020 – winners and losers: three birds with one stone 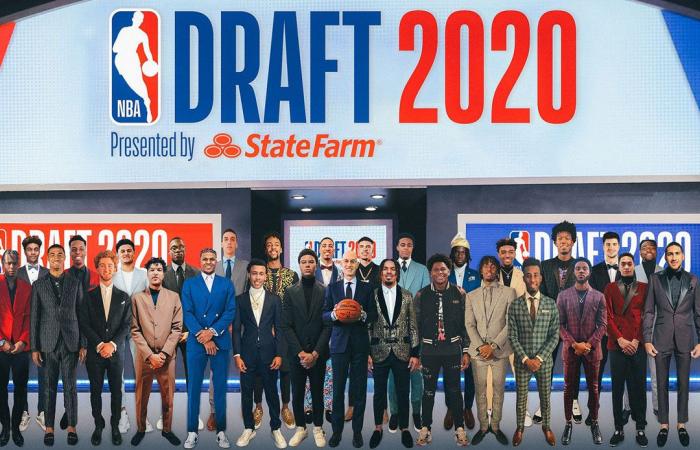 The 2020 NBA Draft is history, Anthony Edwards is the # 1 pick! The Minnesota Timberwolves are probably not really happy with this pick, but they are among the winners of the draft. Meanwhile, a title contender raises questions and the Golden State Warriors are unlucky. You can read the entire draft night here!

Anyone who can be scolded for all time # 1 pick of the NBA Draft 2020 is a winner, no question about it. It is doubtful whether the Timberwolves, with Anthony Edwards as the top pick, will fit into this category. At 8:01 p.m. local time, Adrian Wojnarowski tweeted (ESPN) that the Wolves are still in trade talks for the # 1 pick. By then they were officially “on the clock”.

A trade did not materialize in spite of the numerous speculations beforehand and so the Edwards pick still makes the most sense. James Wiseman or LaMelo Ball would not have fit into the core of the Wolves around Karl-Anthony Towns and D’Angelo Russell, the Georgia Guard brings some promising attributes as an athletic scorer and the potential as a defender, at least on paper.

Team President Gersson Rosas and his front office only catapulted themselves into the ranks of the winners of the draft during the course of the evening, especially with the trade for Ricky Rubio. The point guard was killed along with picks 25 and 28 from Oklahoma City (for number 17), and Minnesota was killed in Leandro Bolmaro and Jaden McDaniels after another deal with the Knicks.

Quite apart from the fact that the Wolves secured more promising talents towards the end of the first round, with Rubio there is also a seasoned veteran who makes his teammates better and, as a mentor of D-Lo and Edwards, gives the two youngsters a few tips the way there.

With this, Rosas killed two birds with one stone when putting together his squad – three to be precise. Because Rubio was anything but happy after the trade from Phoenix to OKC and left the opposite AZ Central announced: “I don’t like it at all. You give it your all and you have to go at the first opportunity.”

Loud The Athletic The Spaniard, on the other hand, quickly made friends with the prospect of returning to his old place of work. In Minny, he spent his first six years in the NBA without taking a breath of the postseason air. Now he wants to help the Wolves finally start an attack on the playoffs again.

NBA Draft 2020: All the first round picks – Anthony Edwards number 1 – Hayes to the Pistons

The problems of the Sixers last season included the non-existent shoot, the lack of another playmaker in the guard positions and – to put it briefly – Al Horford. The busy new team president Daryl Morey addressed all three problems on draft day.

And last but not least, Morey also threaded a trade with the Mavs, who swapped Josh Richardson and the number 36 pick for Seth Curry – another shooter, but one that is also one of the best in the league and that also for himself and that teammates can create. The Sixers have sensibly strengthened their roster around the superstar duo Joel Embiid and Ben Simmons and at the same time got rid of two high earners. Not a bad result, even if they had to hand in picks themselves.

The fact that Deni Avdija would be in ninth position and Tyrese Haliburton in twelfth position seemed almost impossible before the draft. Both traded significantly higher and in the end fell into the hands of the Wizards (Avdija) and Kings (Haliburton). Haliburton,

, will be able to help immediately in the fight for the playoffs in Sacramento, both as a backup for De’Aaron Fox or alongside Buddy Hield – provided the dissatisfied Guard is not traded.

Avdija, meanwhile, is a good fit on the not exactly lush wing of the Wizards, who can provide additional playmaking alongside John Wall and Bradley Beal or also radiates danger off the ball with his cuts. And at least delivers a little defense. Although, contrary to expectations, he fell to ninth place, the Israeli was also one of the winners of the evening.

"hey dad can I do my draft interview in the wine room?" -Deni Avdija probably pic.twitter.com/iQuTeVR24n

This transition leads us directly to Aleksej Pokusevski, who with his next NBA salary should perhaps be the very first to get an event planner in case there is something to celebrate again at some point.

On the other hand, there is actually reason to be happy at the Pokusevski family, because as the number 17 pick of the Thunder he will certainly have enough time to develop in Oklahoma City. There is no pressure in OKC anyway, the rebuild is in full swing.

With the Horford trade, GM Sam Presti secured his 16th first round pick by 2026. So he had no problem trading up to secure the Serbian big. In the second round, OKC also struck in Europe with Theo Maledon (# 34) and Vit Krejci (# 37).

The 22-year-old hardly got a word out during his interview ESPN, the emotions overwhelmed him too much. “I’m from New York. The fact that I am allowed to represent my city is unbelievable,” Toppin stuttered through tears.

For Dunk-Machine and College Player of the Year Toppin, the draft evening went perfectly, and the Knicks should be pretty happy too. After all, it was known in advance that team president Leon Rose could very well imagine the Big Man in Madison Square Garden. After all, he didn’t have to trade up and sell assets to get it.

Toppin brings talent and the prospect of delighting the fans – and certainly just as many question marks, for example in defense. The problems in the guard position have not been addressed in New York either. So the draft for the Knicks definitely didn’t go perfectly. But for Toppin it does.

These were the details of the news NBA Draft 2020 – winners and losers: three birds with one stone for this day. We hope that we have succeeded by giving you the full details and information. To follow all our news, you can subscribe to the alerts system or to one of our different systems to provide you with all that is new.