Mohamed Salah from Cairo Airport to his brother’s wedding … Photos 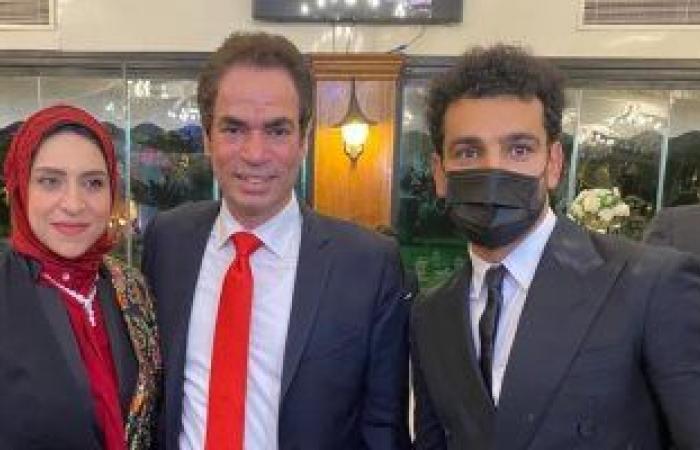 The international Mohamed Salah, the English star of Liverpool, was keen on the presence of his brother, Nasr Salah, upon his arrival in Cairo, where the world star arrived at exactly nine oclock in the evening on Monday, accompanied by Mahmoud Trezeguet of Aston Villa, and Mohamed El-Nani, the Arsenal player, coming from England to participate with the national team The national team has two matches against Togo in the home and away matches scheduled for the 14th and 17th of November, as part of the qualifiers for the 2022 African Nations Cup.

The Egyptian Mohamed Salah celebrated the wedding of his brother Nasr, as the ceremony was held in Cairo in the presence of the families of the newlyweds and close friends, and the son of Ahmed Nagy, the coach of the former team goalkeepers, published a picture that he collected with “Ferrari of the Pharaohs” from inside the wedding ceremony. The strategy, the former advisor to the President of the Republic, who attends the wedding with his wife, Dr. .

Ashraf Sobhi, Minister of Youth and Sports, had telephoned Mohamed Salah, the star of the Egyptian football team, to check on the completion of all his procedures for his arrival on Monday to participate with the national football team during his match against Togo, and the Minister of Sports sent a ceremony for the Ministry of Youth and Sports to receive Mohamed Salah .

In a related context, Dr. Ashraf Sobhi witnessed Monday evening the training session for the Egyptian team, which will be held Monday evening at Cairo International Stadium, in order to support the team and its technical and administrative apparatus prior to its matches with the Togo national team.

The national team, led by Hossam El-Badry, started the grandfather stage in preparation for the two-day confrontation with Togo on November 13 and 17 in the African Nations Qualifiers Cameroon 2021. In the third and fourth round of qualifiers for the 2020 African Nations Cup in Cameroon, where the Pharaohs will host the Togo team in the first meeting, and the second meeting will be held on Competitor land on 17.

These were the details of the news Mohamed Salah from Cairo Airport to his brother’s wedding … Photos for this day. We hope that we have succeeded by giving you the full details and information. To follow all our news, you can subscribe to the alerts system or to one of our different systems to provide you with all that is new.