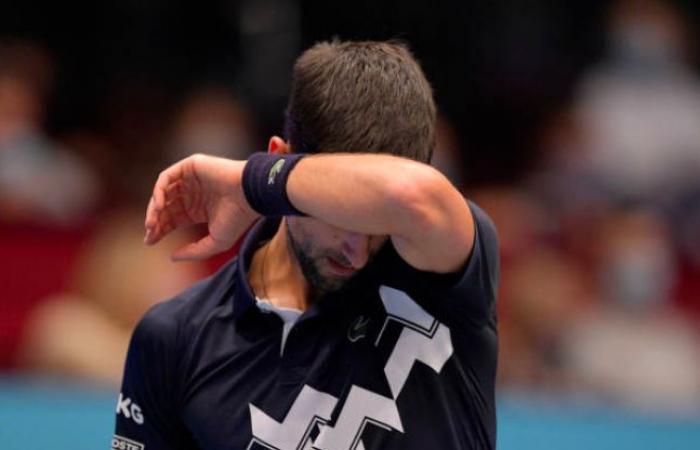 What happened yesterday in the ATP 500 from Viena it wasn’t just anything. In itself it is rare to see Novak Djokovic lose a tennis match, if we also add that it was on a fast track, indoors, in a round like the quarterfinals, against a rival like Lorenzo Sonego, number 42 in the ranking and with the Lucky loser label in the box, we would already have enough reasons to have a historic result. But, in addition, the Italian only let the Serbian do three games, which ends up completing this feat.

Novak has had few more gray days in his entire career, but he has had a few. Today we review which have been the six most convincing defeats of Djokovic as a professional, the six defeats in which he could not even sign more than four games.

Fifteen seasons have passed since that day and people still remember it. A 17-year-old Djokovic made his debut in a Grand Slam final draw and on the other side of the net appeared Don Marat Safin, at that time in the fourth step of the world ranking. A brutal clash of reality and level where the Russian had no mercy, dealing him the cruelest defeat of his career, a beating that to this day has not seen a greater one. It took fifteen years for another tennis player on the circuit (Lorenzo Sonego!) To leave the Balkan in just three games, although not in a Grand Slam. Safin, by the way, ended up lifting that title in Melbourne. We will see in which photograph the Italian is pigeonholed tomorrow Sunday.

Five years after his defeat with Safin, the reality of our protagonist had changed for the better. From being the No. 20 in the world at that Australian Open, now the last name Djokovic appeared as the second best racket on the circuit. Not every week, but the one from Belgrade was already immersed in that intense fight with Rafael Nadal and Roger Federer, although at the moment he was not able to overcome them. In Monte Carlo, however, it was another Spaniard who showed him that on clay he still had to work hard to reach his best version. Fernando Verdasco, at the height of his career, left just four games to advance to his first and only Masters 1000 final.

After Verdasco, it is time to invite Ferrer to take his place in this article, and he will not be the last Spaniard to fall here. We are going to the 2011 Masters Cup, the fifth appearance of the Serbian in the tournament. It is not easy to get used to competing with the best on the circuit in an event, much less at the end of the season, where everyone arrives with the reserve on. Under these conditions, it was where the one from Jávea hunted which at that time was the No. 1 in the world (there are things that do not change). A review of the manual, with the difficulty involved in doing it indoors, which caused Djokovic to be unable to pass the group stage. Such a disaster would not happen again until 2019, where the Serbian would not overcome the Round Robin either.

We return to Monte Carlo, one of the tournaments that cost Novak the most to unlock due to the immense number of Spaniards who came out there in his wake. Much more, taking into account the figure of Rafa Nadal, who would again stop his feet in clay as in the old days. The Serbian was returning to the final in Monaco, he was fighting for the title in the Principality, but the Balearic decided that that Sunday he would not have started. Four games did Novak, unable to find a way to knock down his rival. But it was Nadal and it was clay, an outcome that must always be taken into account as an option to wait.

This time, we will not consider Novak, since he faced an uncontrolled beast. A reborn Tsonga who, being No. 15 in the world, took out his entire arsenal of punches to consecutively push Novak Djokovic (# 1), Andy Murray (# 9), Grigor Dimitrov (# 8) and Roger Federer (# 3) in the end. Nothing to do against the French, unleashed throughout that week in Toronto. The Serbian, who had just won his second Wimbledon, was surprised in the second round against a player he had beaten eleven times in his last twelve meetings. But that day everything was different.

A tennis defeat but also very mental. The Serbian was betting on playing the Vienna tournament, where he needed two victories to secure the world number 1 at the end of the season, a goal he easily achieved after adding two victories on the fast track. But in the third phase I was expecting a radiant Sonego, covered, wanting to shake the hornet’s nest. The Italian, who had entered the box as a lucky loser, signed the best match of his career last night to knock down the best on the circuit. A religious experience where he only gave up three games, this being Novak’s biggest loss in a best-of-three game. A marker and a day that will be forever etched in the grayer chapters of Nole.

*The article has been translated based on the content of Source link by http://www.puntodebreak.com/2020/10/31/djokovic-tambien-humano
. If there is any problem regarding the content, copyright, please leave a report below the article. We will try to process as quickly as possible to protect the rights of the author. Thank you very much!

These were the details of the news Novak Djokovic’s most resounding defeats for this day. We hope that we have succeeded by giving you the full details and information. To follow all our news, you can subscribe to the alerts system or to one of our different systems to provide you with all that is new.