Roglic struggled with the rain jacket and dwindling strength 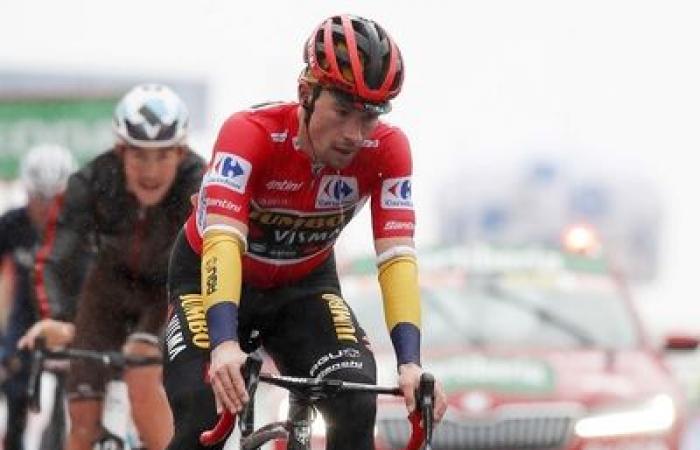 Black day for Jumbo – Visma at the Vuelta

25.10.2020  | (rsn) – Primoz Roglic (Jumbo – Visma) lost the lead in the overall ranking of the Vuelta a Espana on the 6th stage and lost his red jersey. The Slovenian crossed the finish line at Aramon Formigal in 20th place and lost 43 seconds to the new leader Richard Carapaz (Ineos Grenadiers). A rain jacket was partly to blame, as it became known later.

On the descent of Puerto de Cotefablo – the penultimate mountain of the stage, which was crossed 40 kilometers from the finish – Ineos Grenadiers had increased the pace drastically in the pouring rain. In the valley there were only around 35 drivers in the field. What the TV viewer did not know at the time: The man in red was not there!

“I had problems with my rain jacket. I couldn’t put it on, and when the field broke in two, I was placed too far back,” said the defending champion in an interview with the Dutch broadcaster NOS after the stage.

In the final climb, the 30-year-old was driven back to the group of favorites by his team, but was soon isolated and finally paid for the effort in the final. “Thanks to my team-mates, I was able to return. But I got the bill for it in the mountain,” said the Tour de France runner-up.

Not only did he get the bill, but also his entire team. Because bringing the captain forward again took all of my energy and, in the end, time. George Bennett crossed the finish line 55 seconds after Roglic and dropped from tenth to 13th place in the classification, but it was really bad for Sepp Kuss. The American lost more than ten minutes and can now forget a good position in the overall standings, although he started the stage in sixth overall.

“It is what it is. Sometimes you win, sometimes you lose. We have a day off tomorrow and then the race continues,” said Roglic, who after losing to Tadej Pogacar (UAE Team Emirates) at the Tour de France and the Giro d’Italia 2019 also seems to be used to setbacks.

By the way: Problems with rain jackets increased this week. On the 18th stage of the Giro on the way to the Stilfserjoch, both Jai Hindley and Wilco Kelderman (both Sunweb) had difficulties in putting on their capes before going downhill. The Australian almost got off the road.

*The article has been translated based on the content of Source link by https://www.radsport-news.com/sport/sportnews_122362.htm
. If there is any problem regarding the content, copyright, please leave a report below the article. We will try to process as quickly as possible to protect the rights of the author. Thank you very much!

These were the details of the news Roglic struggled with the rain jacket and dwindling strength for this day. We hope that we have succeeded by giving you the full details and information. To follow all our news, you can subscribe to the alerts system or to one of our different systems to provide you with all that is new.