The relationship of the “Big Three” of tennis broke down and... 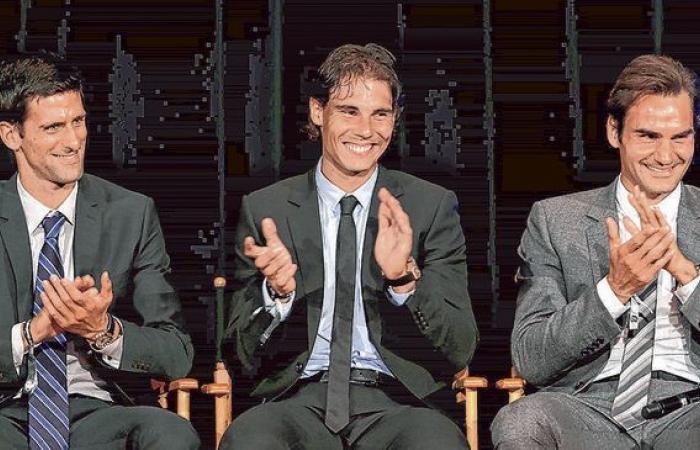 Other times, when everything was laughter between the big three / Archive

Something broke. In the message that Roger Federer exposed on social networks after Rafael Nadal raised the Roland Garros trophy for the thirteenth time and in this way equaled it in number of Grand Slam tournaments (20), the Swiss made no mention – not even in passing- Novav Djokovic, a member of the so-called “Big Three” of tennis and who, as is known, was the one defeated by the Spanish in Paris.

“I have always had the greatest respect for my friend Rafa as a person and as a champion. As my biggest rival for many years, I think we have pushed each other to become better players. Therefore, it is a real honor for me to congratulate him on his 20th Grand Slam victory, ”wrote Federer praise for Nadal among other things.

For his part, Antonio Nadal Homar – better known by Uncle Toni, who until recently was his nephew’s coach, now that place is occupied by Carlos Moya – had said at the time that “Federer is the best in history. If he weren’t Rafa’s uncle, I would want him to always win ”; while now he affirmed that “Roger and Rafa raised tennis to a higher category, difficult to beat. I think it’s fair that they are considered the best two ”. And Djokovic?

Before the Roland Garros final, Goran Ivanisevic had a bravado in an interview saying that “Nadal has no chance in these conditions. Novak has been convinced and is clearly the number one favorite to win, ”said the Serbian’s coach.

Of course, once a new coronation of the Spanish was consummated in Paris, everyone took it upon themselves to remind him of his words to the Croatian. “He really meant it. I have the right to say what I think and believe in my player, I believed that it was the opportunity and the year for Novak to win Roland Garros. I repeat, I exaggerated a bit when I said that Nadal had no chances, but at that moment I preferred to decide for Novak. I say what I think. It would be easier if I had said ‘win the best’ or ‘whatever happens will happen’, but I said it the way I felt it. Nadal showed that my opinion was not correct ”.

Without a doubt, Ivanisevic’s previous statements did not sit well with the “Nadal clan” as with the rest of the tennis world. Djokovic remained on the sidelines, but his silence validated the exaggerated sayings of his coach. Despite the fact that Nole is an excellent player through his game, he is the least “loved of the three” by the people despite his undeniable achievements (17 Grand Slam).

On the other hand, Nadal (who on Tuesday received the Grand Cross of the Order of Sports Merit, the highest decoration that can be awarded to an athlete in Spain) and Federer did not welcome the news that Djokovic cut himself off and created a new Association of male tennis players.

In this case, before Djokovic spoke on the subject, Nadal had said that “I think we are living in a period in which we have to keep calm and all work together in the same direction. It is time to unite and not divide, ”said the Spaniard, a member of the ATP players council; while later, Federer joined Rafa’s claim. “I agree with Nadal. These are uncertain and difficult times, but I think it is essential for us to remain united as players, “wrote the Swiss on Twitter.

In this regard, Djokovic disagreed with the position of his “Big Three” teammates. “Of course I would love to have Roger and Rafa on board the same boat. I really understand that some of them have different opinions and do not believe that it is the right time, ”the Serbian signed at that time.

Something broke in the relationship of the members of “Big Three.” It was clear that Nadal and Federer go one way and Djokovic another. Is it a matter of jealousy or something else on the part of the Serbian?

*The article has been translated based on the content of Source link by https://www.eldia.com/nota/2020-10-15-4-9-35-la-relacion-del-big-three-del-tenis-se-quebro-y-sera-dificil-volver-a-recomponerla-deportes
. If there is any problem regarding the content, copyright, please leave a report below the article. We will try to process as quickly as possible to protect the rights of the author. Thank you very much!

These were the details of the news The relationship of the “Big Three” of tennis broke down and... for this day. We hope that we have succeeded by giving you the full details and information. To follow all our news, you can subscribe to the alerts system or to one of our different systems to provide you with all that is new.