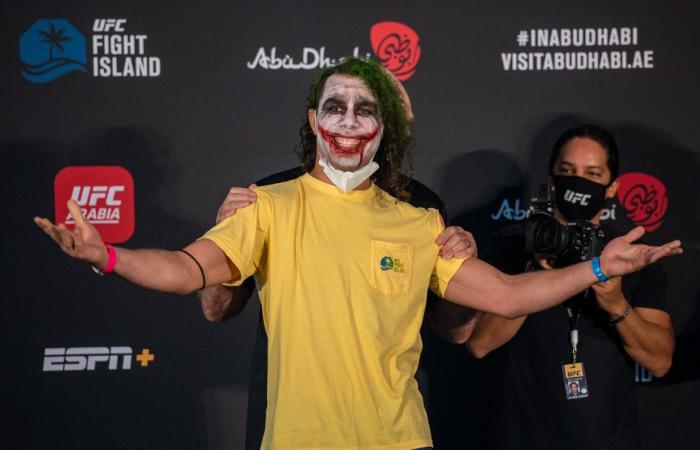 Jeddah - Yasmine El Tohamy - ABU DHABI: Cory Sandhagen is a step closer to a shot at the UFC Bantamweight title after beating the number-one ranked challenger, Brazilian Marlon Moraes, on a night that also saw popular Jordanian fighter Ali Alqaisi disappointingly lose to Tom Kelley and Joaquin Buckley produce the moment of the event at Yas Forum in Abu Dhabi.

With a TKO win after 1.03 of round 2 of the main event, Sandhagen was the big winner of Fight Night 2, the third of the five-event Fight Island 2 series, which kicked off with UFC 253 on Sept. 27 and which will conclude with UFC 254 on Oct. 24.

“Marlon is a really dangerous guy, so it was ‘keep myself safe with the distance’, other than that, it was ‘just be better than him’,” the 28-year-old American said. “I think I hurt him with a couple of body shots, I kicked him in the head pretty good and I saw swelling right off the bat, which usually means an orbital break, so I was going to attack that side.”

The fourth-ranked Sandhagen, now with a record of 13-2-0, quickly turned his attention to removing the only two fighters — TJ Dillashaw and Frankie Edgar — still ahead of him in the queue to take on the winner of a potential title bout between current champion Petr Yan and Alijamain Sterling.

In the co-main event of the night Edson Barboza defeated Makwan Amirkhani of Finland thanks to a unanimous decision in their featherweight bout.

“I’m very happy, that’s my second win in the featherweight division,” the Brazilian kickboxer said. “I’m very happy to get my W, I think I fought well, not a lot of risk in the fight, feel great.”

Before the two headlining fights, another unanimous decision had given the 34-year-old Polish heavyweight Marcin Tybura a win over the American Ben Rothwell.

“It went as planned,” the winner said. “I knew he would come forward with big shots, a lot of big shots, and he did, but lots of those punches just landed on my hands, so I wasn’t really damaged.”

Tybura also expressed his delight at once again fighting in the UAE capital, following his win over Maxim Grishin at UFC 251 in July.

“This is my second time here, so I love it,” he said. “Obviously it would be much nicer if we were able to walk around Abu Dhabi or even visit Dubai or something, but still it’s a great place, great weather, great hotel, accommodation, everything is great, I love it.”

“I would love to have somebody from the top 10 now,” Tybura added. “I’m dreaming of a rematch with Derrick Lewis. I think I’ve developed and I would love it if he gave me a rematch.”

In a middleweight fight, South African Dricus Du Plessis overcame Markus Perez of Brazil thanks to unanimous decision, and can now claim impressive career numbers of 15-2-0.

“I came in here and finished a guy that’s never been finished, best night of my life.”

Meanwhile Spaniard Ilia Topuria defeated Yousef Zalal of Morocco via a unanimous decision in their featherweight clash, and declared that even without the presence of fans, it had been an “amazing, amazing experience.”

In the first fight of the main card, Englishman Tom Aspinall managed to stop Alan “the Black Sanourai” Baudot after only 1.35 of round 1 in their heavyweight bout.

“I felt the fight was good, I felt that my performance was OK, could have been better,” said Aspinall. “I was stepping in a little bit too close, but I’m still learning, so I’m going to make mistakes in there.”

Meanwhile, one of the highlights of the night, if not all of Fight Island 2, was in the Prelims when Joaquin Buckley knocked out fellow American Impa Kasanganay with a stunning spinning kick in round 2 of their middleweight fight.

“It was just open,” Buckley said. “I saw that he still had my legs, I was still able to balance with him grabbing my foot, so I just spun and kicked and it got the result we needed.”

Buckley revealed that his spectacular victory had prompted UFC President Dana White to promise him a bountiful future.

“The boss just told me that he wants to give me all of the bonuses,” he said

In the other Prelims, middleweight Tom Breese beat KB Bhullar via a round 1 TKO; Chris Daukaus also stopped Rodrigo Nascimento Ferreira in the first round of their heavyweight bout; Ali Alqaisi lost to Tony Kelley in three rounds; featherweight Giga Chikadze overcame Omar Antonio Morales via a unanimous decision; Tracey Cortez defeated Stephanie Egger in their women’s bantamweight fight; and Tagir Ulanbekov had kicked off the night with a unanimous decision win over Bruno Silva in their flyweight bout.

Fight Island 2 now moves on to next weekend’s last Fight Night, before ending with UFC 254 on October 24, in which champion Khabib Nurmagomedov will take on Justin Gaethje in a lightweight title fight.

These were the details of the news UFC’s Markus Perez serious despite wearing The Joker’s smile ahead of fight night for this day. We hope that we have succeeded by giving you the full details and information. To follow all our news, you can subscribe to the alerts system or to one of our different systems to provide you with all that is new.