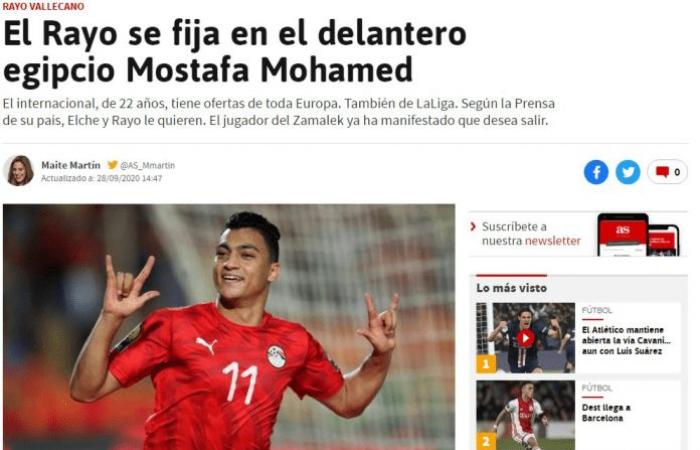 The Spanish newspaper AS revealed that Mostafa Mohamed, the Zamalek striker, is within the circle of interests of the duo Rayo Vallecano and Elche, who play in the Spanish League “La Liga” competition. The newspaper indicated that the Zamalek striker had stated his desire to leave. He decided to settle three deals a week before the end of the summer transfer market, namely: left back, winger and outspoken striker.

The newspaper highlighted what Mustafa Mohamed did with the Olympic team in the 2019 U-23 Africa Cup of Nations, after scoring four goals to become the top scorer for the tournament that crowned the Egyptian Olympic team.

The newspaper also indicated that Rayo Vallecano does not have a crisis in the inclusion of foreign players, as the club has a vacant position regarding the number of players from outside the European Union, where it is possible that the place of the striker of the Olympic team.

Earlier reports had spoken about the desire of many European clubs to sign with Mustafa Muhammad, similar to the top Turkish league Fenerbahce and Galatasaray.

These were the details of the news Mostafa Mohamed is wanted in the Spanish League for this day. We hope that we have succeeded by giving you the full details and information. To follow all our news, you can subscribe to the alerts system or to one of our different systems to provide you with all that is new.