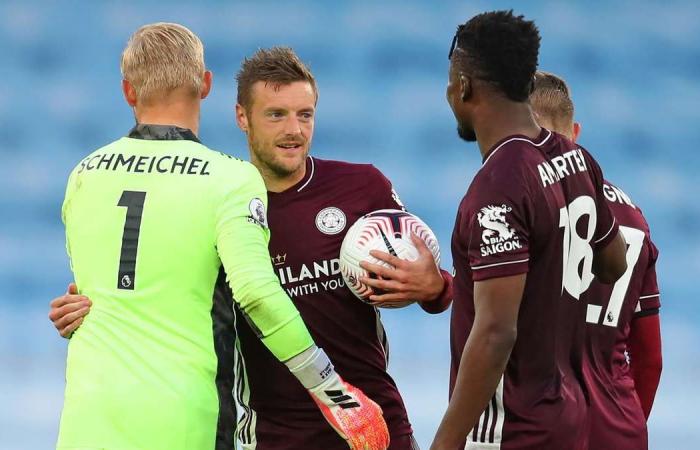 Kyle Walker – 5. Conceded the penalty that allowed Leicester to level after getting the wrong side of Vardy. His pace got him out of trouble at times but a game to forget for the full-back. EPA

Eric Garcia – 4. Lost Vardy for the striker’s second, before a clumsy foul on the Leicester man allowed him to complete his hat-trick from the penalty spot. City desperately need Aymeric Laporte back. EPA

Nathan Ake – 6. Shipping five on his first home league start is hardly ideal, even if he wasn’t to blame for any of the goals. Scored a good header, albeit a consolation. Reuters

Benjamin Mendy – 3. Gave away a silly penalty toward the end of a shambolic display. Often caught out of position, most notably to allow Castagne space to set up Vardy’s second. The Frenchman looked set be the next great Premier League left-back before a succession of injuries struck. If he’s to recover that form, he’s got a long way to go. EPA

Rodri – 6. The Spaniard started well as City controlled the first half hour, but as his team imploded, his influenced faded. PA

Riyad Mahrez – 7. Opened the scoring against his old club with one of sweetest struck shots you’re likely to see this season. Unfortunately, that was as good as it got for the Algerian, who didn’t really threaten for the other 86 minutes. He should probably get a 5 or generous 6, but his goal was that good. EPA

Kevin De Bruyne – 5. One of the rare occasions where the Belgian didn’t dominate the game. Just couldn’t get anything going as Leicester refused to allow him any space. EPA

SUBS: Liam Delap (51’) – 6. Almost scored a league debut goal but saw his header hit the bar. Looks a promising talent and City’s demise against Leicester certainly not his fault. Reuters

Ferran Torres (64’) – 5. Can’t remember a single thing the Spaniard did of note. An impact sub he was not. EPA

LEICESTER CITY RATINGS: Kasper Schmeichel – 7. Had no chance with either goal but produced some good saves and commanded his area with typical authority. Reuters

Daniel Amartey – 7. Deployed on the right side of a back three, the Ghanaian slotted seamlessly into the Leicester defence. A very pleasing performance on his first league appearance since October 2018 having been sidelined with a long-term ankle injury. AFP

Jonnny Evans – 7. An assured display from the Northern Irishman, who alongside his defensive partners, kept City at bay. AP

Çağlar Söyüncü – 8. Commanding performance from the Turkish centre-back. Hardly gave the City forwards an inch. A defender tailormade for the Premier League. AP

Timothy Castagne – 8. Great run and low cross for Vardy’s second the highlight of another strong performance. The Belgian has taken quickly to life in the Premier League. AFP

Nampalys Mendy – 7. Played a vital role in stifling City's attacks and ensuring their 72 per cent possession did not translate into goalscoring chances. EPA

Youri Tielemans – 8. Top performance from a top player. Produced a perfectly weighted pass to Castagne to start the move for Leicester’s second and matched City’s midfield all game. Scored the third penalty. EPA

James Justin – 7. Got forward in support of Leciester's counters and stuck to his defensive duties. A solid game. Getty Images

Dennis Praet – 6. Difficult for a player like Praet to affect a game when his team see so little of the ball. Replaced on 69 minutes. Reuters

Jamie Vardy –10. Smart turn to draw the foul for the penalty, which he comfortably converted, before a classy first-time finish for his and Leicester’s second. Won and converted a second penalty for his hat-trick to become the only player to score two trebles against Pep Guardiola’s City. Only one other player has scored a hat-trick against a Guardiola City side: Lionel Messi. AP

Harvey Barnes – 8. Caused all sorts of problems for City’s defenders with his running on the ball. Played the pass that led to Vardy’s foul for the first penalty. The English forward is developing into a fine player. EPA

SUBS: James Maddison (69’) – 8. Scored an absolute worldie to turn the win into a rout, curling a long-range effort into the top corner. Then won the penalty for Leicester’s fifth. Leicester will be even better when he’s back to full fitness. EPA

These were the details of the news Jamie Vardy 10, Youri Tielemans 8, Kevin De Bruyne 5: Manchester City v Leicester City player ratings for this day. We hope that we have succeeded by giving you the full details and information. To follow all our news, you can subscribe to the alerts system or to one of our different systems to provide you with all that is new.