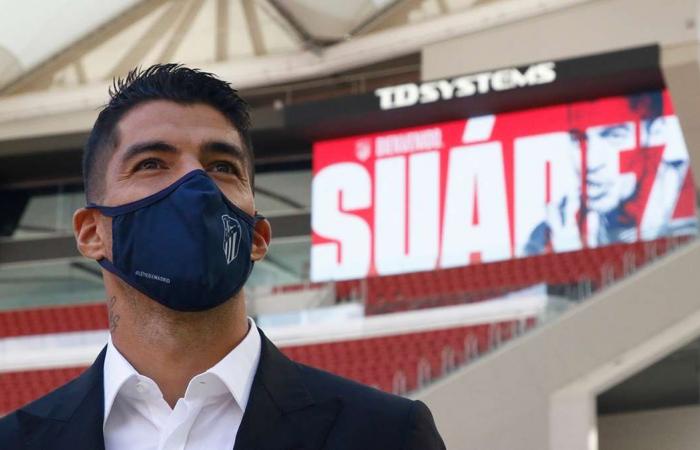 Hind Al Soulia - Riyadh - July 2, 2010: Luis Suarez first entered football's collective consciousness at the 2010 World Cup in South Africa. During a quarter-final match against Ghana, the Uruguay striker stopped a goal-bound Dominic Adiyiah effort on the line with his hand and was shown a red card. Former Al Ain striker Asamoah Gyan saw his resulting penalty crash against the bar, with Suarez celebrating the miss wildly on the touchline. Uruguay would go on to advance to the semi-finals via a 4-2 penalty shootout win. Getty

November 20, 2010: The first of three unsavoury incidents involving Suarez biting an opponent. During a match against PSV Eindhoven, the Ajax striker bit Otman Bakkal's shoulder during an exchange. Though it went unpunished at the time, Suarez was retrospectively banned for seven matches. Getty

November 11, 2011: Already facing an FA charge over the Patrice Evra incident, Suarez did his character credentials few favours when celebrating a goal against Fulham a few weeks later. The Liverpool striker made an obscene gesture to fans while celebrating a goal and was handed a one-match ban. Getty Images

February 11, 2011: The tension ahead of the first meeting between Suarez and Evra since the former was charged and found guilty of racially abusing the latter was palpable. During the pre-match formalities, Suarez refused to shake Evra's hand before kick off at Old Trafford. Getty Images

October 28, 2012: Suarez celebrated a goal for Liverpool against bitter rivals Everton by diving in front of then Toffees manager David Moyes, who had earlier claimed that ''divers'' such as Suarez were putting fans off the English game. AFP

January 6, 2013: Suarez further endeared himself to English football fans when he handled the ball in the lead up to his goal during the FA Cup third round match against Mansfield Town. Liverpool won the match 2-1, which only added additional fire to Suarez's critics. Getty Images

April 21, 2013: A second bite at the cherry (pun fully intended). Suarez bit down on the arm of Chelsea defender Branislav Ivanovic and then rolled around in agony to try and con the referee that he was the injured party. He escaped punishment at the time but was fined by Liverpool the following day and charged with violent conduct by the English FA. Suarez was handed a 10-match ban by an independent regulatory commission, which Liverpool opted not to appeal against. Rex Features

June 24, 2014: Suarez clashed with Italy defender Giorgio Chiellini while waiting for a cross during a World Cup group match. Replays showed that the Uruguay striker lunged at Chiellini and bit his shoulder (Chiellini showed bite marks), followed by Suarez falling and clutching his face. Again Suarez escaped punishment on the field, and Uruguay went on to win the match 1-0 to advance to the last-16, knocking the Azzurri out in the process. Two days after the match, Suarez was banned for nine international matches. Getty Images

September 17, 2020: After a relatively calm period in Suarez's career, a report from Italy ignited more controversy. Prosecutors in Perugia announced they were investigating the Barcelona star on suspicion of cheating to pass his Italian language test with the help of his teachers ahead of a proposed move to Juventus. EPA

These were the details of the news Luis Suarez trains with Atletico Madrid after being forced out by Barcelona - in pictures for this day. We hope that we have succeeded by giving you the full details and information. To follow all our news, you can subscribe to the alerts system or to one of our different systems to provide you with all that is new.