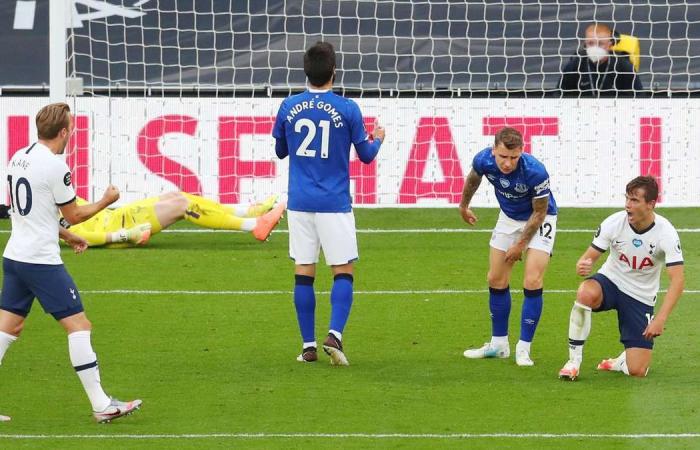 Thank you for your reading and interest in the news Lucas Digne 8, Harry Kane 6, Gylfi Sigurdsson 4: Tottenham v Everton player ratings and now with details

Hind Al Soulia - Riyadh - TOTTENHAM RATINGS: Hugo Lloris - 7: Furious at Son at end of first half when the South Korean failed to track back. French goalkeeper was rarely troubled, though, by a woeful Everton attacking effort. AFP

Toby Alderweireld - 8: Recalled by Jose Mourinho as he would deal better with Everton's "in your face" tactics, according to the Portuguese. There was little sign of that, though, as the centre-back came up against an impotent opposition attack. Reuters

Eric Dier - 7: Solid from the defender who was relatively untroubled throughout. Curled one free-kick on to the roof of the net in first half. PA

Ben Davies - 7. Worked hard at the back with some strong challenges and tried to get forward when he could. PA

Harry Winks - 7: Recalled into midfield by Mourinho and was solid if unspectacular. Getty

Giovani Lo Celso - 7: Tried to claim the goal but his shot was going well wide before being deflected into net. Full of running from start to finish. Reuters

Son Heung-Min - 6: Failed to track back in first half when Everton went close to scoring which sparked confrontation with Lloris as the teams came off at half-time. Had a few attempts on goal - forcing a good save from Pickford, curling one wide and another straight at the keeper. AFP

Harry Kane - 6: Given no opportunities in box and starved of service but still produced a few lovely passes, tracked back when needed and was effective defending in his own box. Obviously not where Kane wants to be making his mark, though. PA

Steven Bergwijn - (On for Son 78') NA: No chance to make impact. Getty

EVERTON RATINGS: Jordan Pickford - 6: Completely wrong-footed by deflection for opening goal. Lucky to avoid a calamity just before the break when a simple cross slipped straight through his hands. Saved well from Son early in second half. Getty

Seamus Coleman - 6: Captain tried to bomb forward down the right, particularly in second half but his final ball was poor. AFP

Michael Keane - 7: Tried to block Lo Celso's shot in first half but only succeeded to deflecting the ball straight into the net. Helped keep Kane quiet in and around the box. AFP

Mason Holgate - 6: Booked for rash foul on Lo Celso and picked up an injury making the challenge that saw him taken off after 35 minutes. Getty

Lucas Digne - 8: Brilliant full-back play in first half when he read a Moura run down right and denied him chance to get ball into box. Very dangerous with dead-ball crosses. Getty

Andre Gomes - 5: Really poor first half with loose passes, poor challenges and one wild shot that flew very high and wide. Little better after break when he picked up a booking. PA

Tom Davies - 6: Recalled to make his 100th Premier League appearance, the midfielder was neat and tidy without any game-changing moments. Getty

Gylfi Sigurdsson - 4: Lazy performance from the Iceland midfielder. Backed out of one challenge in first half and generally offered very little. Substituted with more than 20 minutes left. Getty

Alex Iwobi - 5: Played down the left at the Tottenham Hotspur Stadium and contributed very little. Hooked at the break, although manager Ancelotti suggested afterwards that he had picked up an injury. AFP

Richarlison - 6: Had Everton's best chance of the first half, and probably the game, when he shot just wide from 20 yards. Seemed to be targeted by Spurs players and was constantly on receiving end of fouls, winning numerous free-kicks. Reuters

Dominic Calvert-Lewin - 5: Offered little or no threat in front of goal. One backheel attempt in second half that flew straight to Lloris AFP

Yerry Mina - (On for Iwobi 45') 6: Misjudged one long ball that allowed in Son whose shot, much to the Colombian's relief, was saved by Pickford. Reuters

Anthony Gordon - (On for Iwobi 45') 6: The teenager wasn't short of confidence although his two attempts on goal did not trouble Lloris. Reuters

Bernard - 6 (On for Sigurdsson 67'): Certainly seemed more interested and offered more going forward than Sigurdsson, but that isn't saying much. EPA

Moise Kean (On for Davies 77') NA: One tame effort straight at Lloris. Reuters

Djibril Sidibe (On for Coleman 77') NA: No time to make impact. Getty

These were the details of the news Lucas Digne 8, Harry Kane 6, Gylfi Sigurdsson 4: Tottenham v Everton player ratings for this day. We hope that we have succeeded by giving you the full details and information. To follow all our news, you can subscribe to the alerts system or to one of our different systems to provide you with all that is new.