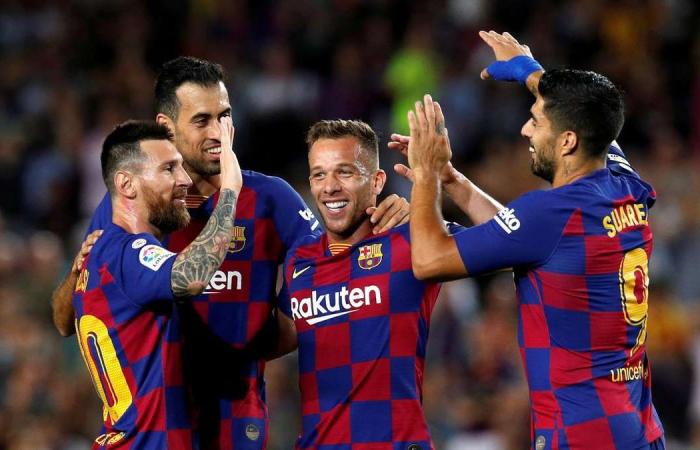 Thank you for your reading and interest in the news Barcelona agree to sell Arthur to Juventus for €72 million, Miralem Pjanic to make opposite move and now with details

Hind Al Soulia - Riyadh - Barcelona have agreed to sell Brazil international Arthur to Italian champions Juventus for a fee of €72 million (Dh297m) plus add-ons with a separate deal negotiated for Miralem Pjanic to move the opposite way.

Hours after announcing Melo's move to Turin, the Spanish champions announced the signing of Pjanic, 30, on a four-year contract for an initial fee of €60 million with a potential €5 million more in bonuses.

Both midfielders will see out the remainder of the 2019/20 season at their respective clubs, which has been extended until August because of the coronavirus pandemic, before moving.

The transfer of Melo, 23, helps Barcelona towards their target of generating €124 million in revenues through player sales before June 30.

Both clubs are still involved in the knockout stages of the Champions League, meaning they could face each other before making their moves ahead of next season.

"FC Barcelona and Juventus have reached an agreement for the transfer of the player Arthur Melo. The Italian club will pay €72 million, plus €10 million in variables," Barcelona confirmed.

"The player will remain at FC Barcelona until the official competitions for the 2019/20 season end."

Barcelona have the highest revenues in world football but their finances, like many clubs, have been hit by the pandemic, affecting ticket sales, television rights and merchandising, leading the club to enact a 70 per cent pay cut for players in April.

Arthur joined Barca from Brazilian side Gremio in July 2018, helping the Catalans win La Liga in his first season.

However, he has failed to impress Quique Setien since the Spaniard replaced Ernesto Valverde in January, making only 14 starts this campaign.

But despite a promising opening spell, Arthur made only 19 league starts in his first season with the club and 14 this campaign, and coach Quique Setien said earlier this month that he had not lived up to expectations.

Setien said in a press conference ahead of Tuesday's clash with Atletico Madrid that the midfielder had promised to give his all for the rest of the season as Barcelona look to make up a two-point gap on Real Madrid at the top of the table.

"We expect the greatest commitment from him until the last day he is here," Setien said. "He is still a Barcelona player until the end of the season and has promised that he will give everything to achieve the goals we have set. He is a guy who will be committed until the last day."

Bosnia international Pjanic, 30, joined the Turin giants in 2016 from Roma, and has been an integral part of Maurizio Sarri's side.

Pjanic won Serie A in his first three seasons with Juve, who are four points clear of second-place Lazio as they bid for a ninth successive scudetti.

These were the details of the news Barcelona agree to sell Arthur to Juventus for €72 million, Miralem Pjanic to make opposite move for this day. We hope that we have succeeded by giving you the full details and information. To follow all our news, you can subscribe to the alerts system or to one of our different systems to provide you with all that is new.