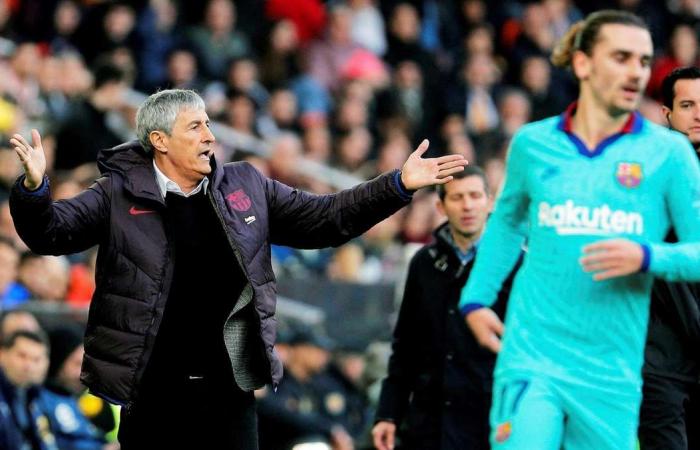 Thank you for your reading and interest in the news Quique Setien's grand theories not enough, Barcelona need practical solutions against Leganes and now with details

Hind Al Soulia - Riyadh - Two-and-a-half weeks after he arrived in Barcelona, as the club’s third choice manager, Quique Setien still has the look of a professor turning up at a household that had just dialled the emergency services asking for a fireman. The fault is not with Setien as much as with the householder.

When Barcelona sacked Ernesto Valverde, Setien’s predecessor, there was no raging fire to extinguish, just a smoke detector that kept beeping, perhaps because the battery was low, or some of the beams in the building creaked because they are ageing.

The governors and the season-ticket holders at Camp Nou had sensed, accurately, the symptoms of gradual decline. But Valverde left with Barca at the top of La Liga, the same place he led them to at the end of his previous two seasons. And he left mid-season, which always means an abrupt start for a replacement.

Alas, two league games into Setien’s reign, they have fallen from top spot, and, this being Barcelona, where judgement tends to be impatient while at the same time measuring every newcomer according to how faithful they are to a patient style of football, some tough verdicts are already being cast.

El Mundo Deportivo, the Barcelona-based sports newspaper, looked ahead to this evening’s Copa del Rey fixture against Leganes armed with a rap sheet.

A sceptical dissection of the new manager followed, highlighting the emphasis put on Setien’s main recommendation for the job – his admiration for decorative, pass-and-move football, and his history of encouraging it while working at clubs well beneath Barcelona in the hierarchy.

The former Real Betis and Las Palmas coach, 61, has been around long enough to have anticipated some critical reaction to his appointment, and some venom once his Barcelona lost on his first league away trip – 2-0 at Valencia at the weekend – but he also finds himself, having issued such a clear manifesto about restoring the club’s pride in the beauty of their football, hemmed in, without a clear Plan B.

Had he come in – after Xavi, the former Barca captain, and Ronald Koeman, committed to managing Holland, both said no to succeeding Valverde – strictly as a firefighter and presented a Plan B that prioritised points over football principles, his audience might have been more forgiving. But in the absence of greater dynamism and improved results, the purist Setien has limited alibis.

The winter transfer window was supposed to help, especially once his arrival coincided with the news that striker Luis Suarez would be out injured for four months. The search for a reliable goalscorer to replace Suarez had settled on the possibility of Valencia’s Rodrigo, but negotiations have been arduous and.

For Setien, signing a proven finisher would be a blessing, but he knows that, in the medium-term, he will be deemed the right choice if he coaxes from the club’s major signings of this season more than Valverde did. Antoine Griezmann and Frenkie De Jong cost a combined €195m in the summer and are yet to show they represent a clear upgrade.

Setien has cause to thank Griezmann for one thing; the Frenchman’s two second-half goals at Ibiza sparing a humiliation in the Copa del Rey. Ibiza – of the third tier of Spanish football – had taken the lead against Barcelona last week, and held it for well over an hour. Griezmann struck his second goal, ensuring progress to the last-16, in the 2-1 win only in injury time.

A crisis had been averted, but only for three days. At Valencia, the saviour was Marc-Andre ter Stegen, the goalkeeper, for limiting the scoreline to 2-0. “We played too many passes without purpose,” Setien observed, as if the idea of Barcelona’s best football and the cherishing of possession had overtaken the idea of passing with the intention to emerge victorious.

The day after the chastening loss to Valencia, Setien had one-to-one dialogues with a number of players and went through video footage of the Mestalla defeat. And by the evening, Real Madrid had moved above Barcelona to the top of the table.

Camp Nou will expect a positive response in the Copa del Rey on Thursday, not least because Leganes are 19th in the top division. Levante, 13th, are the next visitors, in La Liga, on Sunday. That’s two apparently gentle fixtures for the new man in charge to prove he has the same gift for practical solutions as he does for outlining the right sort of theory.

These were the details of the news Quique Setien's grand theories not enough, Barcelona need practical solutions against Leganes for this day. We hope that we have succeeded by giving you the full details and information. To follow all our news, you can subscribe to the alerts system or to one of our different systems to provide you with all that is new.