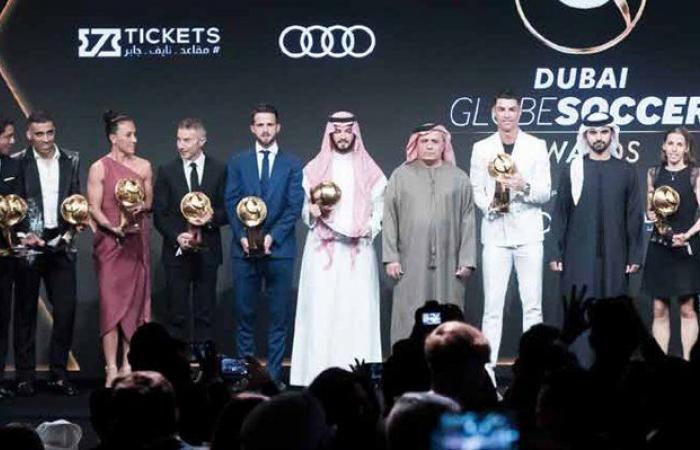 Thank you for reading the news about Al-Hilal, Al-Nassr striker feted at Dubai Globe Soccer Awards and now with the details

Jeddah - Yasmine El Tohamy - DUBAI: Saudi Arabia’s Al-Hilal football club and the striker of Saudi club Al-Nassr were among the recipients of 17 awards presented during the 11th edition of the Dubai Globe Soccer Awards on Sunday night.

The awards were in recognition of the football stars in the region by the Dubai Globe Soccer Awards in cooperation with Kooora.

“The global success of the Dubai Globe Soccer Awards over the years is tangible proof of how the football industry has grown exponentially in every aspect in the Middle East. Through these awards, we aim to motivate and inspire athletes, both young and young at heart, men and women, as well as all those who work tirelessly behind the scenes, always giving the best of themselves for the continuous expansion of this wonderful sport that is football,” said Tommaso Bendoni, CEO of Dubai Globe Soccer Awards.

Hilal were the winners of the AFC Champions League for the third time in 2019, equalling the record of the Korean club Pohang Steelers in Asia’s premier club competition.

The glittering ceremony also saw Portuguese champion Cristiano Ronaldo honored for the sixth time as Best Men’s Player of the Year in acknowledgement of his success during the season, winning in Italy with Juventus FC (Serie A) and in Europe with Portugal (UEFA Nations League).

Sharing the stage in Dubai to receive an award dedicated to the best athletes at the international level was English champion Lucy Bronze, who was named Best Women’s Player of the Year.

After a stellar season with Olympique Lyonnais, which can count four prizes in its trophy cupboard for 2019 — French Championship, French Cup, Trophee des Championnes (France) and UEFA Women’s Champions League (Europe) — Bronze enters into the history of Globe Soccer as the first holder of the prize dedicated to women in football.

Note: There are two winners for Best Academy of the Year and Player Career Award.

These were the details of the news Al-Hilal, Al-Nassr striker feted at Dubai Globe Soccer Awards for this day. We hope that we have succeeded by giving you the full details and information. To follow all our news, you can subscribe to the alerts system or to one of our different systems to provide you with all that is new.