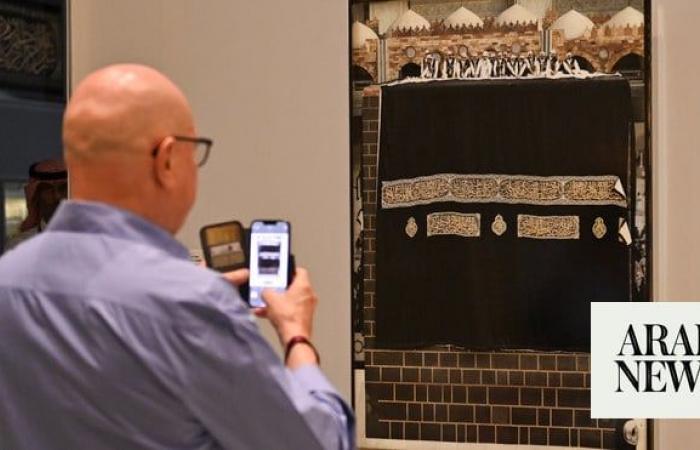 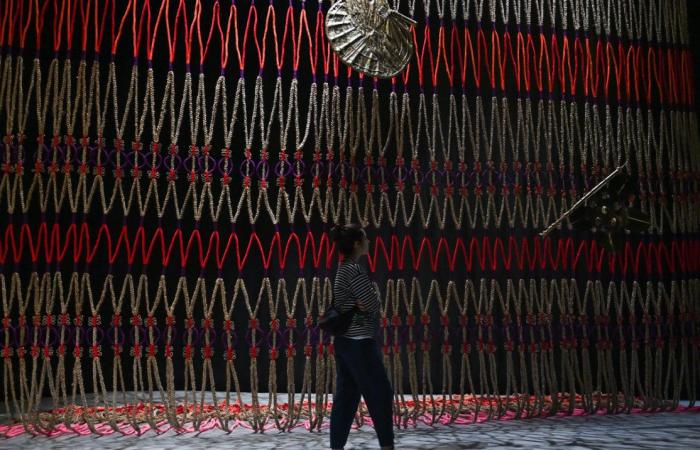 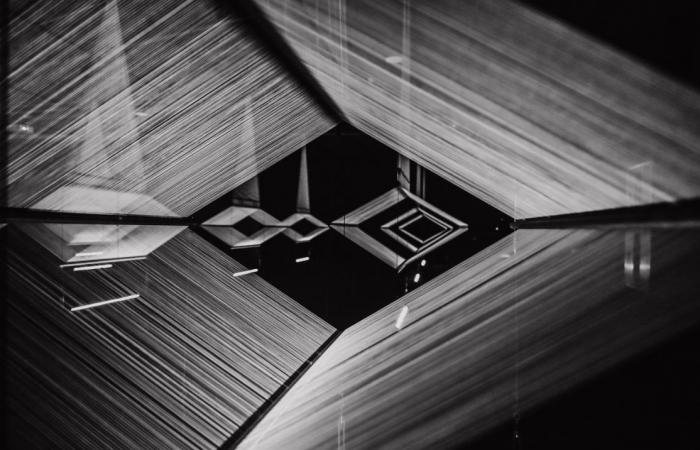 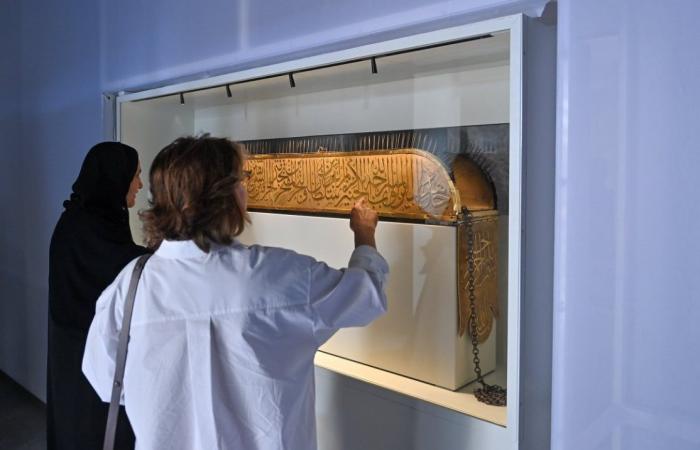 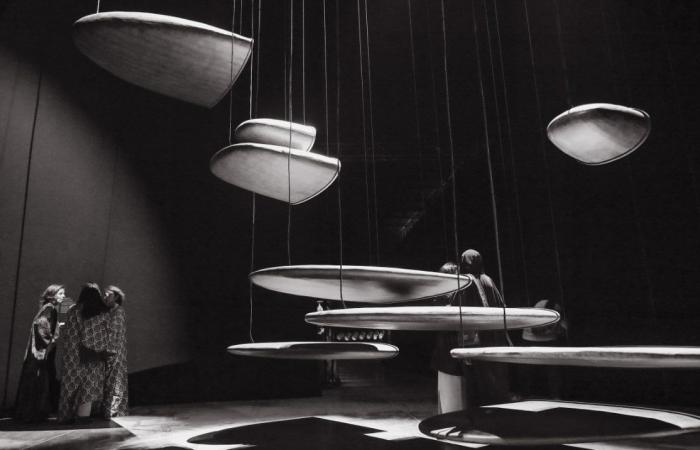 Jeddah - Yasmine El Tohamy - JEDDAH: Saudi Arabia witnessed a historic moment with the opening of the inaugural Islamic Arts Biennale, which presented historic and contemporary works of Islamic art from around the world.

On the evening of Jan. 22, the Western Hajj Terminal at King Abdulaziz International Airport in Jeddah was filled with crowds of people waiting in eager anticipation. This was not the usual throng of pilgrims that use the terminal each year to travel to Makkah for the annual Hajj pilgrimage, but one awaiting the beginning of another voyage — a metaphorical one into the realm of Islamic art through the first-ever Islamic Arts Biennale hosted by the Kingdom.

The crowd gathered under the impressive canopies of the Hajj Terminal, designed by Skidmore, Owings & Merrill, which won the 1983 Aga Khan Award for Architecture.

The biennial event, which includes many newly-commissioned and never-before-seen works of art, marked a historic moment not just for Saudi Arabia and the Diriyah Biennale Foundation that staged the event, but for the legacy of Islamic art, which has witnessed hardly any large-scale international exhibitions since the 1976 World of Islam Festival in London.

Jeddah’s inaugural Islamic Arts Biennale celebrates the legacy of Islamic art in a place close to Makkah, the fountainhead and cradle of Islam, while forging a dialogue between the past, present and future through contemporary artworks by 60 established and emerging artists from Saudi Arabia and around the world, and with over 60 new commissions and 280 historical artifacts.

The effect is illuminating, mystical and enlightening in that this biennial, like its theme “Awwal Bait” which means “First House” in Arabic, celebrates the beauty and heritage of Islamic art in the birthplace of Islam.

“The Islamic Biennale, staged in this location at the Western Hajj Terminal, has meaning and anticipation for the future,” Saad Alrashid, a leading Saudi scholar, archaeologist and one of the curators of the event, told Arab News.

“Jeddah is the gate of the Haramain and has a deep history. There is an accumulation of strata of civilization in Saudi Arabia and throughout the ages this area was the crossroads of civilization between East and West and up to the North. Staging the Islamic Biennale here presents to the world the idea of connection between all Muslims and everybody that comes and goes from Saudi Arabia geographically, historically and politically.”

In the same vein, the theme “Awwal Bait” explores how the Holy Kaaba in Makkah and the Prophet’s Mosque in Madinah aim to inspire Muslims both culturally and metaphysically to explore their sense of belonging and ponder the definition of home.

“Seeing the Biennale come to life through the voices and perspectives of our artists has been profound,” she added. “Each of them has boldly and sensitively taken on the opportunity of this platform to contribute to an emerging discourse on Islamic arts that we hope will continue.”

Staging the Islamic Arts Biennale was the result of a global effort. More than 18 local and international institutions, including the General Presidency for the Affairs of the Two Holy Mosques, alongside artifacts loaned by other prestigious international institutions with an interest in Islamic Arts, such as Benaki Museum in Athens, the History of Science Museum at the University of Oxford, the Louvre in Paris and the Victoria and Albert Museum in London.

The Biennale was curated by a multi-disciplinary group of specialists, including Omniya Abdel Barr, an Egyptian architect and Barakat Trust Fellow at the V&A, and Julian Raby, director emeritus of the National Museum of Asian Art at the Smithsonian Institution in Washington, DC.

“It was challenging to find objects that have survived that were made in Makkah and Madinah,” said Abdel Barr to Arab News. “We searched within collections to see how we could create a conversation between historic objects while also keeping in mind the contemporary context and this was the most interesting part.”

Regionally, the Diriyah Biennale Foundation has secured loans for the exhibition from institutions such as the King Abdulaziz Library, the National Museum, King Faisal Center for Research and Islamic Studies and King Saud University — all in Riyadh — and Makkah’s Museum of Antiquities and Heritage, the General Presidency for the Affairs of the Two Holy Mosques and Umm Al-Qura University. From the wider region, works have been loaned from the Al-Sabah Collection and Dar Al-Athar Al-Islamiyyah in Kuwait, the Museum of Islamic Art, Cairo, and the Museum of Islamic Art, Doha, among others.

The viewing experience is mystical, like a pilgrimage in itself. It begins in darkness with American Lebanese artist Joseph Namy’s commission “Cosmic Breath” presenting recorded calls to prayer from countries around the world played together, working as if in unison with the installation across the room by Saudi artist Nora Alissa, titled “Epiphamania: The First Light,” which depicts various black and white shots of pilgrims around the Kaaba shot impressively from beneath her abaya. Nearby is an Islamic astrolabe that is positioned towards Makkah. The trio of works mark the first example in the carefully curated show, demonstrating the dialogue generated from historic and contemporary Islamic works of art.

The structure of the Biennale is divided into four galleries and two pavilions that house artworks regarding daily Islamic rituals and Hajj. These sections intend to evoke both personal and collective emotions about the spiritual life of Muslims around the world.

Large-scale, newly-commissioned works are found outside around the terminal’s expansive and evocative canopies, amid rays of sunlight and views of Jeddah that periodically include airplanes taking off high into the sky. The works outside communicate with nature and the Aga Khan award-winning architecture of the terminal itself.

Outside are also the pavilions of Makkah and Madinah, which present material from the Two Holy Mosques, Masjid Al-Haram and from the Hujra Al-Sharifa in Madinah. The focus here is on the initial journey that the Prophet Mohammad and his followers took from Makkah to Madinah to escape persecution. The objects on display, once again a mixture of historic and contemporary, shed light on the sense of universal belonging that ensues from the Muslim pilgrimage and journey home afterward.

Of note is Bricklab’s architectural installation “Air Pilgrims Accommodation 1958” inspired by Jeddah’s historic Hajj housing, which Vally describes as a site that “gathered people from all over the world to stay in one place — a place for cultural production and trade.”

“The idea emanating from the works outside is for them to generate invitations for gathering, for discussion and exchange,” Vally told Arab News.

This is reflected in Tanzanian artist Lubna Chowdhary’s “The Endless Iftar” which is a 40-meter-long table inspired by rituals of eating and gathering from around the world during Ramadan.

Also positioned outside is “My Place is the Placeless” by Iranian London-based artist Shahpour Pouyan, presenting three large-scale differently colored architectural domes that represent the three major traces in the artist’s DNA after he took a test that revealed his origins go beyond his native Iran to include Scandinavia, Central and South Asia, and the Middle East.

“It’s about human interconnectedness in an effort to break down ethnic labels and identities,” Pouyan explained to Arab News.

Like the other works on show, Pouyan’s work reflects not just on Islamic culture but on its universality, its ability to connect beyond the Middle East and offer a unifying force that goes beyond religion, nationality and culture.

As Alrashid states: “Islam is a communication of knowledge and culture.”

He added: “Since the 2030 Vision we sense that we are more welcoming just like the Makkans in the past welcomed visitors during Hajj.

“We are showing the whole world how they can enjoy Islamic art,” he said. “The Biennale is not just an exhibition or something from the past — it continues through culture, through integration with the multiculturalism of Muslims.”

Perhaps the most powerful theme of the exhibition is the idea of Islam and its art across the ages as a physical and metaphorical unifying element that continues to connect diverse cultures and people throughout the world. It is also a way, as Vally stressed to Arab News, “to define what it means to be Muslim from our own perspective, through our own art and culture to the rest of the world and to show how Islam has the power to unite us all, even non-Muslims, through its history, traditions and spiritual practices.”

These were the details of the news Saudi Arabia stages first ever Biennale for Islamic Art in Jeddah for this day. We hope that we have succeeded by giving you the full details and information. To follow all our news, you can subscribe to the alerts system or to one of our different systems to provide you with all that is new.