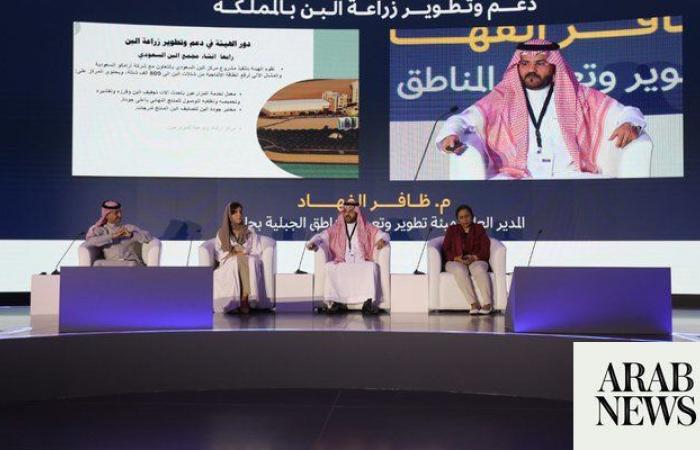 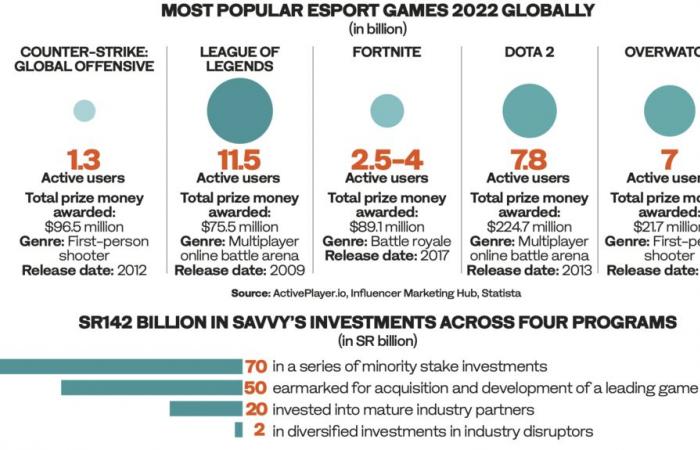 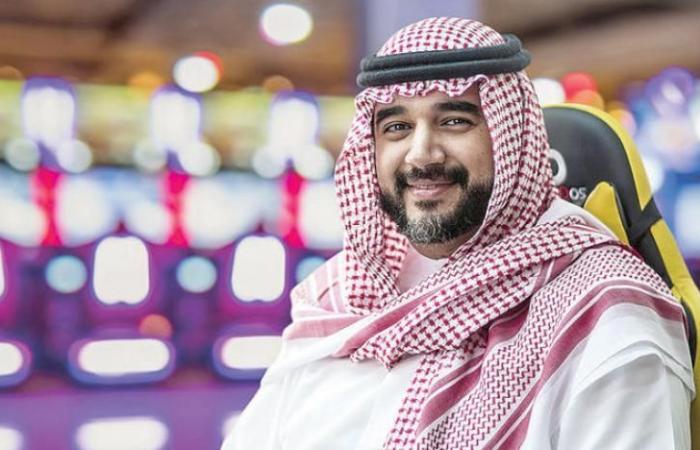 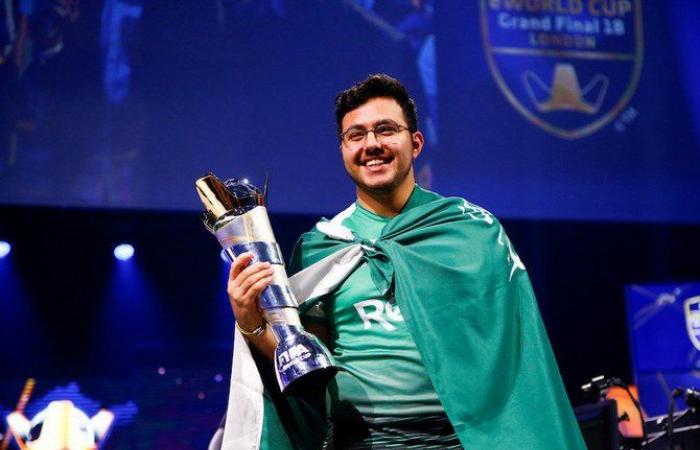 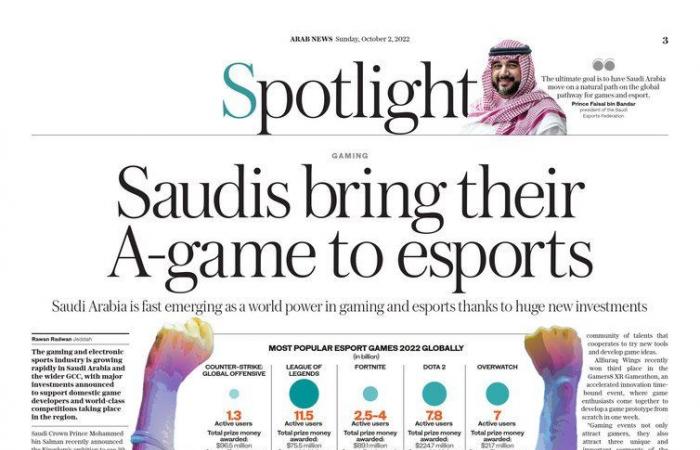 Thank you for reading the news about Global experts discuss economic, social impact of Saudi coffee in Jazan forum and now with the details

Saudi Crown Prince Mohammed bin Salman recently announced the Kingdom’s ambition to see 30 competitive games developed by firms in the Kingdom by 2030 as part of the country’s national gaming and esports strategy.

The investments will include SR70 billion to take several minority stakes in companies that support Savvy’s game development agenda and SR50 billion to acquire a leading game publisher to become a strategic development partner.

Another SR20 billion will be invested in industry partners, and SR2 billion will target industry disruptors to grow early-stage games and esports companies.

“Savvy Games Group is one part of our ambitious strategy aiming to make Saudi Arabia the ultimate global hub for the games and esports sector by 2030,” the crown prince said last week, according to the Saudi Press Agency.

Speaking at the Next World Forum earlier in September, Prince Faisal bin Bandar, president of the Saudi Esports Federation, noted the boom in the sporting sector in the past five years, adding: “One of my favorite things about gaming is that you first introduce yourself to someone using your gaming skills, and not history, religion, color of skin, background or gender.”

He said: “This young community and population are really striving to take their place on the global stage. The ultimate goal is to have Saudi Arabia move on a natural path on the global pathway for games and esports.”

Through this initiative, the government hopes to create 39,000 jobs, establish 250 game developers, and promote a thriving in-house talent pool for esports that will raise the sector’s contribution to the Kingdom’s economy to SR50 billion by 2030.

Scores of domestic startups, as well as more established multinational developers, stand to benefit immensely from the flurry of new investment.

Abdulrahman Al-Sulaimani, an artificial intelligence engineer and games designer who spent nine years working in Japan before returning to the Kingdom in 2020, is among them.

Over the course of his career, Al-Sulaimani has witnessed the astonishing growth of Japan’s world-renowned gaming community. Seeing the same room for potential in his home country, he returned to establish his own studio.

Earlier this year, Al-Sulaimani launched AlBuraq Wings, a games studio that adopts young gamers eager to turn their hand to design and programming.

“I wanted to help gather them under one roof and created the studio with a vision to create games that are not only made by Saudis for Saudis but to also educate the world somehow about how extremely talented our developers are,” Al-Sulaimani told Arab News.

From designers, to developers, artists, voiceover artists and more, game development is not a one-man show. It is a community of talents that come together to try out new technology tools to come up with innovative game ideas.

AlBuraq Wings recently won third place in the Gamers8 XR Gameathon, an accelerated innovation time-bound event, where game enthusiasts come together to develop a game prototype from scratch in one week.

“These tournaments are what push many Saudis to come out and put their skills into the spotlight. I dare say it, the skills of many Saudis surpass those of the Japanese,” said Al-Sulaimani.

“Gaming events not only attract gamers, they also attract three unique and important segments of the gaming community: programmers, designers and artists. If you get all three, you have a game. They all come full circle.”

In 2018, Mosaad Al-Dossary, known online as “Msdossary,” became the first Saudi national to win the FIFA eWorld Cup — an event in which more than 20 million gamers attempted to qualify.

A year later, Saudi gamers were thrilled when the Kingdom was chosen to host the region’s biggest gaming tournament to date, PlayerUnknown’s Battlegrounds (PUBG) Mobile Star.

According to a report published by Boston Consulting Group earlier this year, there are now 23.5 million gamers in Saudi Arabia, making up around 67 percent of the Kingdom’s overwhelmingly young population.

About 90 percent of these gamers take part in esports on an amateur or semi-pro basis, while around 100 Saudi gamers are pursuing e-sports as a full-time career, the report said.

“When it comes to the Arab countries, Saudi Arabia is the number one hotspot of gaming,” one female Saudi gamer and content creator, who goes by the online name “PikaLoli,” told Arab News.

She, like many Saudis, has been playing games from a young age, and recently decided to pursue gaming as a career. She discovered a platform where a growing community of gamers and developers can share ideas and reviews.

“I play all sorts of games and give my feedback on my social media pages,” said PikaLoli. “The interaction and commitment you find by even young ones is outstanding.

“We’ve been waiting for this moment for a while now and the community made up of thousands has been helping each other grow for years. We have a shared platform to communicate with, share ideas, edit videos, play games for developers and give feedback, and so much more.”

Recent graduate Waleed Abu Alkhayr, a game designer, found his footing soon after completing university and enrolling in the Game Development Hima bootcamp, which concentrates on game development by mastering skills and later interning for an international gaming company before landing a job at another.

He told Arab News that IT training programs and learning courses in esport and gaming development appealed to him most, cementing the idea of becoming a game developer.

“I started playing games on Sony Playstation 1 and I haven’t stopped since. The love for games is what led me to want to select this profession, but I didn’t see enough support until very recently when the sector developed at an unprecedented rate; I knew then that this is what I wanted to do.”

Abu Alkhayr, also a member of the AlBuraq Wings, said that the boom in esports and gaming development is not simple hype, but has been brewing for years.

“Initiatives and programs launched by entities that teach game programming and development are numerous and the resources even more so, which provide opportunities and build technical competitiveness in the community. The more the participation of talent, the bigger the community will grow and help build the vision that is set for us,” he said.

For Al-Sulaimani, harnessing this energy, enthusiasm and raw talent is precisely what is needed to put Saudi Arabia on the world map of gaming.

“The Kingdom is nurturing homegrown talent; it is ripe for creating a vibrant environment for esports has long been laid out by the youth with their love and passion for gaming,” he said.

“As game developers have found our platforms, we share our games and receive support, but the recent announcement will give more chances for the younger generation who want to delve into this fun world.” 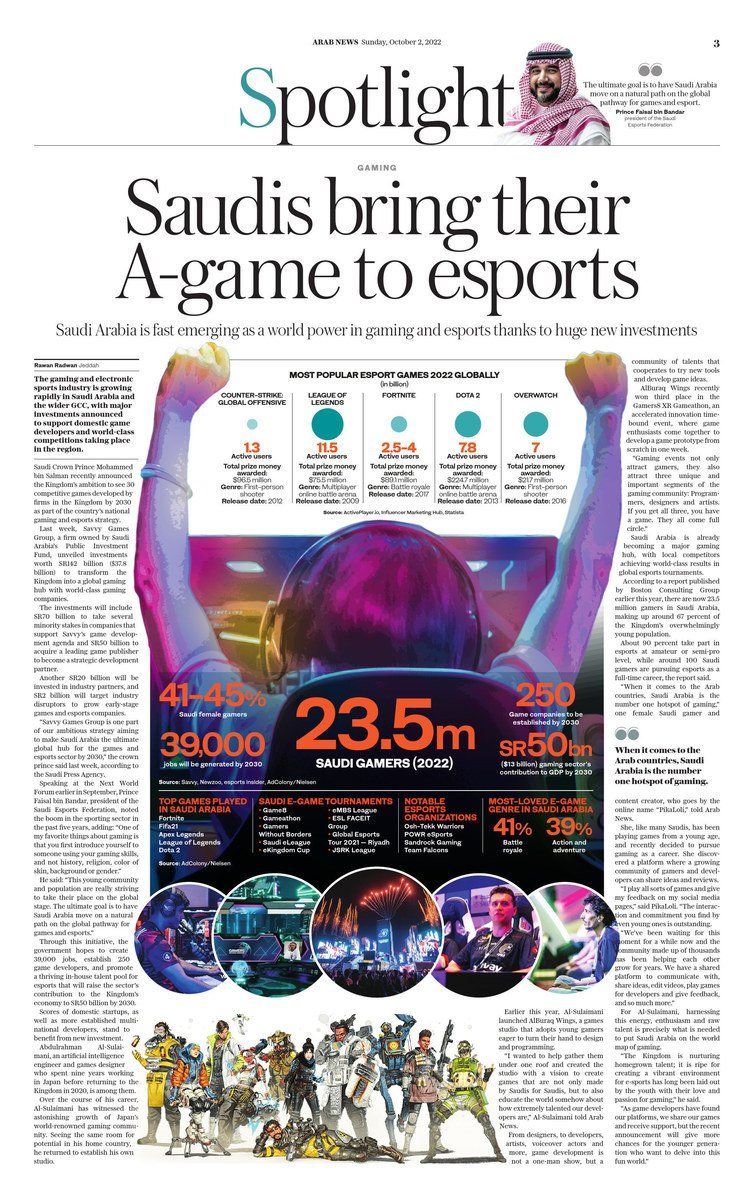 These were the details of the news Global experts discuss economic, social impact of Saudi coffee in Jazan forum for this day. We hope that we have succeeded by giving you the full details and information. To follow all our news, you can subscribe to the alerts system or to one of our different systems to provide you with all that is new.