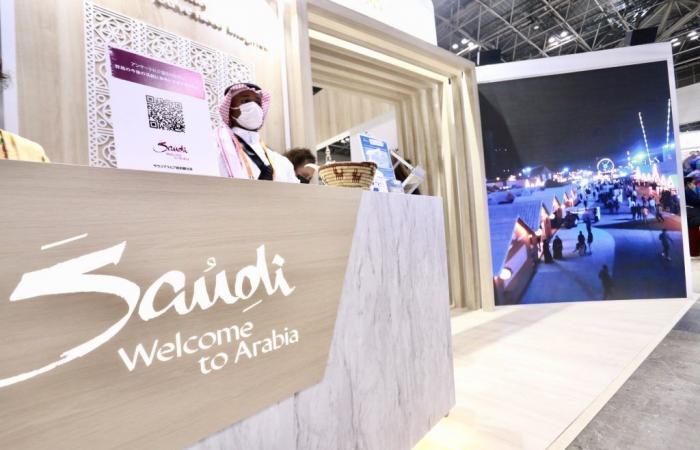 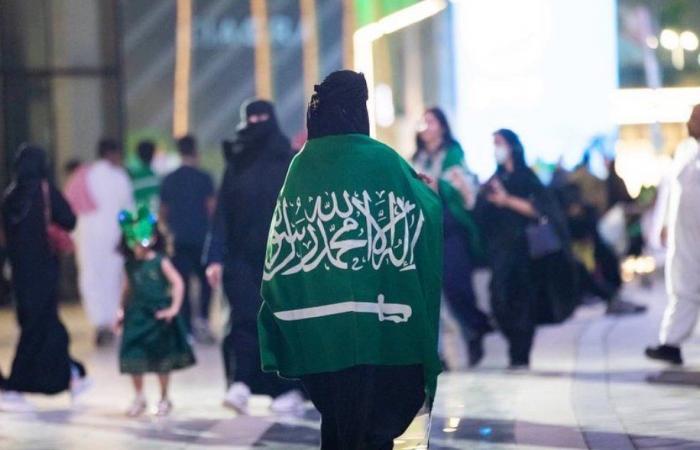 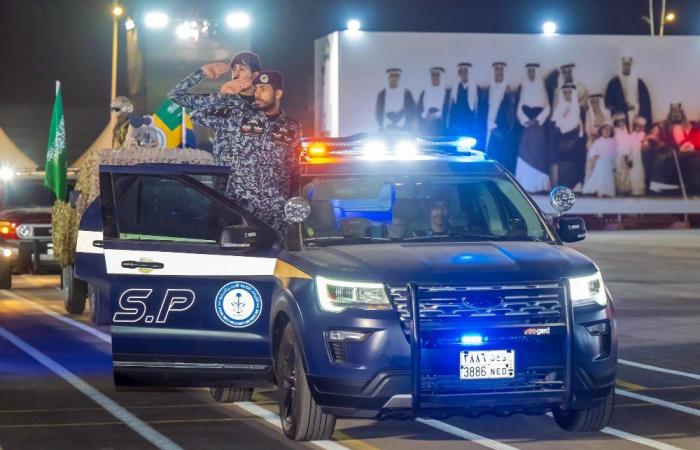 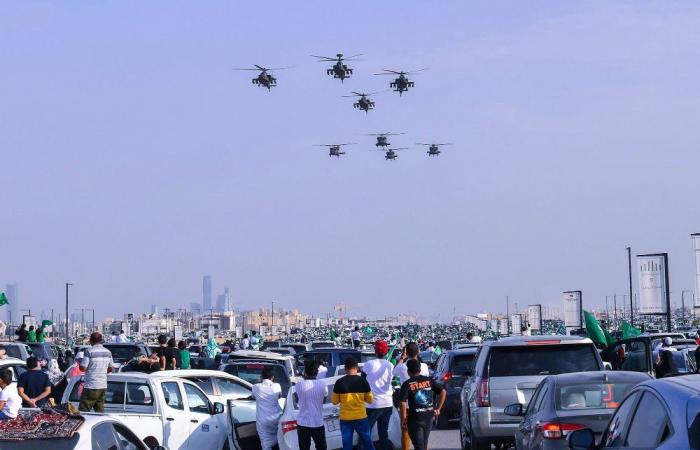 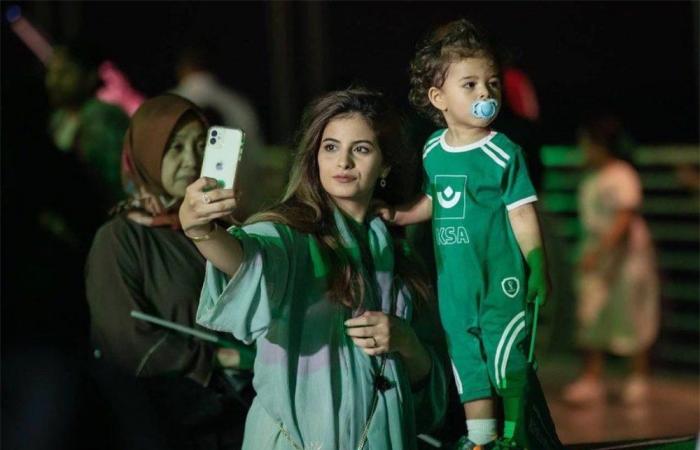 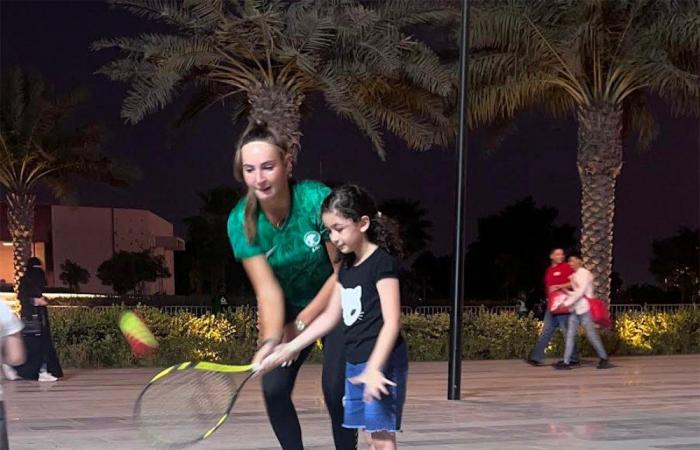 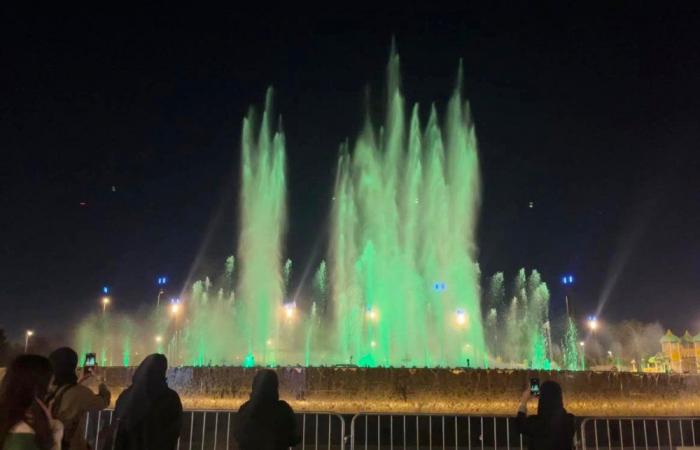 The nation’s dark green-and-white flag could be seen everywhere, and many children were dressed in clothes to match. Some women wore crystals on their faces while others dressed in abayas to complement the theme. Men wore wigs and carried flags.

A parade began as the sun went down and the city cooled, its start announced by a distant thrumming of drums that invited visitors to get to their feet.

The small band that paraded the length of the Jeddah Waterfront was dressed in mostly white. Graceful dancers led the way, followed by drummers who helped to awaken people’s spirits. In the center was a man walking on stilts and dressed in the classic Saudi attire of a thobe and head wrap, or “igaal.”

“It always awakens a sense of patriotism when I visit events like these happening on National Day,” Mariam Mohammad, 24, told Arab News.

“I dragged my family out of the house today. The crowd and the traffic were what was stopping them but we get just one night of the year to celebrate and I was not going to let it slip away,” she said.

Aitzaz Zayn, a Pakistani expat living in Jeddah, said: “I am not from Saudi Arabia but I still like going out and participating in the celebrations. There is something very beautiful about people coming together and celebrating their country.”

The parade in Jeddah was just one of many events held throughout the day.

The Royal Saudi Navy parade took place at Jeddah’s corniche on Friday and large crowds gathered to cheer it on as part of the 92nd Saudi National Day celebrations.

The fun began with an HZ-MS16 helicopter flying over the waterfront as spectators were told all about it via a commentary played through loudspeakers.

One of the Royal Navy’s most powerful aircraft, the helicopter is designed for use in search and rescue operations as well as having anti-submarine capabilities.

A number of ships designed for surveillance, search and rescue and assistance operations were also on the waterfront for people to see.

Salha Al-Shamrani and her daughter Hind visited the show together and were impressed with what they saw.

“This was such an interesting National Day event this year,” Al-Shamrani told Arab News.

“We learned so much through the live audio and watching the tanks and boats. The kids learned a lot too.

“There’s nothing like the Saudi Royal Navy. My husband is an instructor there, so we are familiar with how rescue operations are carried out,” she added.

“It was such a beautiful and rich participation that I learned so much from. The parade was a lot of fun too,” she said.

“We got to see the ships, the tanks, the submarines and the like. I learned about their types and what each one is used for.”

Joy in the park

A spectacular lineup of activities is on offer at Prince Majid Park in Jeddah to mark Saudi National Day.

The fun started on Wednesday and runs through Saturday, with visitors treated to a host of family and community events to celebrate the Kingdom’s culture and diversity. These include folk dances, amazing roaming performances, a musical fountain show, heritage-focused commercial and craft booths, and lots of delicious food.

Amr Alyamani, assistant site manager, said: “We are trying to enhance the National Day experience for everyone across the weekend. Our goal is to create as much joy and excitement for visitors to be mesmerized by the attractions and the musical fountain being played every 30 minutes.

“The stage performances will also reflect the rich history and will captivate audiences with a memorable performance centered on diversity and togetherness,” he added.

“This year, we aim to signify our national journey by recognizing our past, rejoicing the present and, together, look positively toward our future.”

Alexia Tashbaeva, a coach at the Saudi Arabian Tennis Federation, took part in the celebrations.

“We are here in the park to have kids discover the sport. This way we encourage younger generations to come and play with us,” she said.

“As a foreigner, these festivals depict the strength of unity and provide an opportunity to bring people together to share our love for sport with the residents.”

Saeed Baqar, a flute player said: “Celebrating this special national occasion is an affirmation of our role as inspiring and creative artists to showcase traditional Saudi music in a contemporary manner.”

Tickets for the event cost SR30 ($8) and visitors can also pick up National Day memorabilia and dine at the food stalls.

Nabil Cho, a South Korean working in the Kingdom, was among those to enjoy all the fun on offer.

“I never expected an event like this to happen on a National Day,” he told Arab News. “This is my first time visiting here and I’m really excited and really enjoying my time here. It’s nice, it’s wonderful.”

Cho said he heard about the National Day festivities online and invited some of his South Korean friends and colleagues to join him.

Olivier Pierre, a tourist from France, was in Grassy Park with his wife and friends.

“I think this event is very interesting because I am just discovering the Saudi culture. Today is National Day and I am very interested to know more about the cultural dances and the music, so this is why I am here and it is above my expectations,” he said.

“My wife is also very interested in discovering Saudi culture. She discovered this place in Saudi group events chats.”

As well as the action-filled activities, food stalls and boutiques sold traditional dishes and products for visitors, many of whom dressed in festive outfits.

All of the activities at Grassy Park are open to the public from 5 p.m. until midnight on Saturday.

These were the details of the news Saudi Arabia brings new experiences to Tourism Expo in Japan for this day. We hope that we have succeeded by giving you the full details and information. To follow all our news, you can subscribe to the alerts system or to one of our different systems to provide you with all that is new.