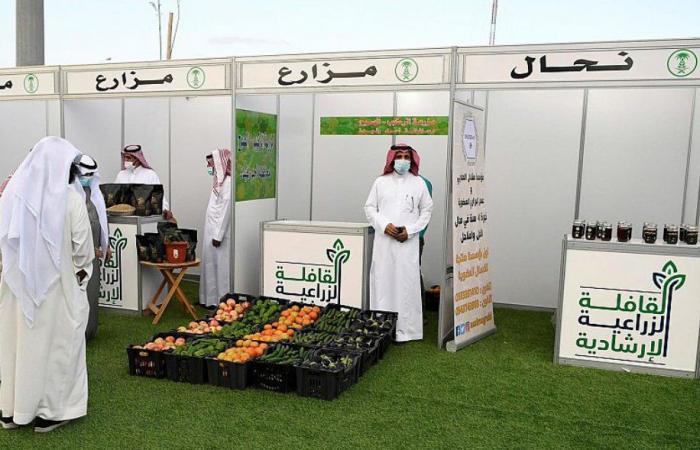 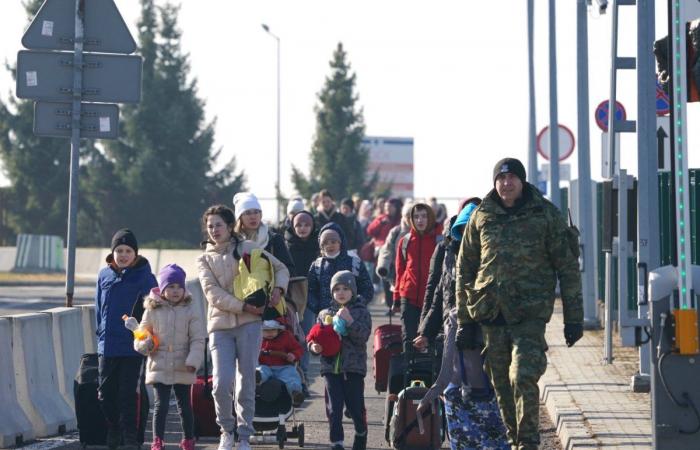 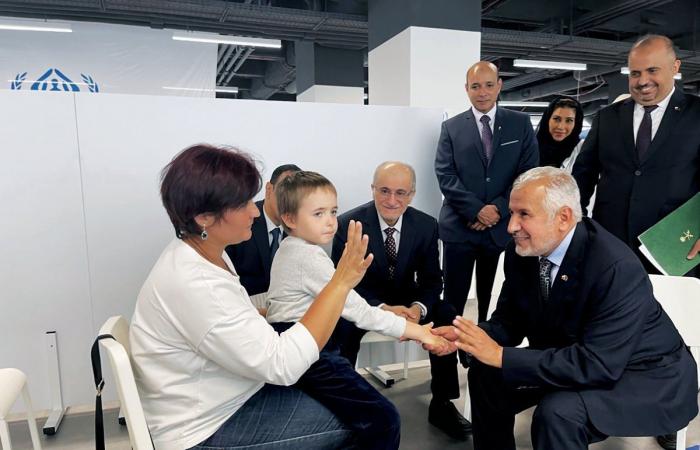 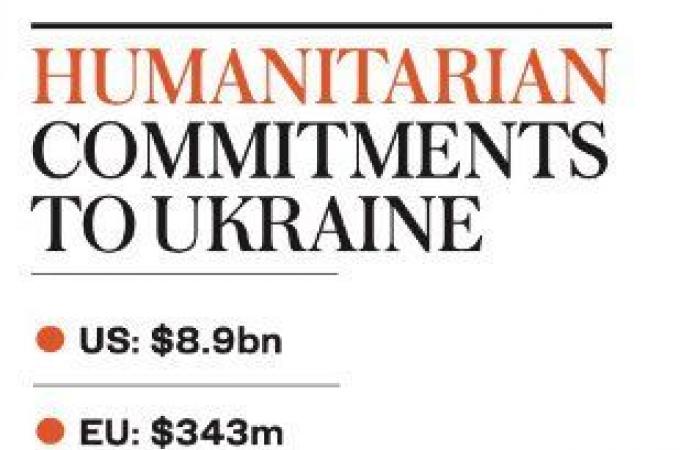 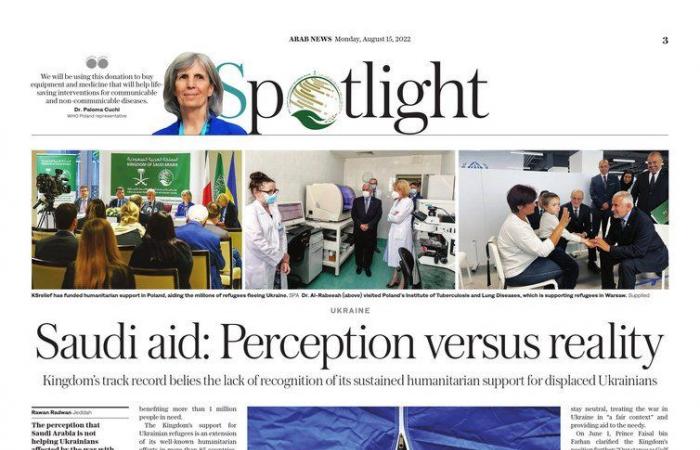 JEDDAH: The perception that Saudi Arabia is not helping Ukrainians affected by the war with Russia is completely at odds with the reality.

The firmness of the Kingdom’s commitment to supporting refugees and resolving the conflict has been evident since the outbreak of hostilities. Aid pledges have been matched by donations that are already making a big difference.

A $10 million Saudi humanitarian package for war-displaced Ukrainians has just been signed off by the UN High Commissioner for Refugees, the World Health Organization and Saudi Arabia’s leading humanitarian aid agency.

About half of the $10 million grant has been allocated for distribution through the King Salman Humanitarian Aid and Relief Centre (KSrelief).

In April, King Salman directed KSrelief to provide this amount of support for immediate assistance and give “urgent medical and shelter aid” to Ukrainian refugees, giving priority to those arriving in Poland.

Delivering on the Kingdom’s promise during his ongoing visit to Poland, Dr. Abdullah Al-Rabeeah, adviser at the Royal Court and supervisor general of KSrelief, also discussed the humanitarian situation with Polish, UNHCR and WHO officials, according to a Saudi Press Agency report.

It said Al-Rabeeah visited several health establishments and facilities, taking time to speak to some Ukrainian refugees who had fled to Warsaw from their war-torn country.

“Thank you very much, and thanks to the center for helping us. The situation is as you can see,” a Ukrainian resident of a refugee center told Al-Arabiya news channel.

“All of us came from Ukraine, and we were in a very bad way. Thanks to you, our situation has improved. Thanks a lot, and we wish peace to the whole world.”

At the Poland-Ukraine border, Al-Rabeeah lauded the collaboration between the WHO, KSrelief, and the Polish government. “We highly appreciate the partnership with the WHO. Our work together has made great support to refugees and those in need here and elsewhere,” he said in a video released by WHO Poland.

KSrelief has donated funds to support the critical response efforts for Ukrainians in Poland, with the delivery of emergency medical supplies and equipment benefiting more than 1 million people in need.

The Kingdom’s support for Ukrainian refugees is an extension of its well-known humanitarian efforts in more than 85 countries, yet several reports have hinted that Saudi Arabia has picked sides in the conflict because of its ties to Russia as a fellow OEPC+ member.

Despite the political and humanitarian initiatives taken by the Kingdom, urging all parties to come to the negotiating table to resolve the conflict through dialogue and diplomacy, the Kingdom’s efforts have been viewed with skepticism in some quarters.

A March report by the Wilson Center, a US government-linked public policy think tank, claimed that Saudi Arabia “has decided to side with Russia” and “chose Putin over Biden,” accusing the Kingdom of playing political games to keep oil prices high.

The remarks came despite the Kingdom’s repeated offers to both mediate between the warring parties and increase oil production along with neighboring Gulf countries.

The differences between the Western and Arab positions on the question of how to end the war have not stopped either side from addressing the humanitarian emergency.

For its part, Saudi Arabia has reiterated that though ending the ongoing war in Ukraine is no easy feat, the Kingdom has treated the issue just as any ongoing crisis in the region, stressing that human suffering is the same in all conflicts and that violence is not the solution.

In March, Saudi Arabia’s Crown Prince Mohammed bin Salman told Russian President Vladimir Putin that the Kingdom was ready to exert all efforts to mediate between the two nations.

In May, Prince Faisal bin Farhan, Saudi Arabia’s foreign minister, met with his Ukrainian counterpart, Dmytro Kuleba, at the World Economic Forum in Davos, Switzerland, to discuss the crisis.

Less than a week later, Prince Faisal bin Farhan met with his Russian counterpart Sergey Lavrov during the latter’s visit to Riyadh, where he underscored the importance of reaching a political solution to achieve security and stability for all involved.

Though scant details on Lavrov’s visit and meeting with Gulf Cooperation Council ministers were released, the trip was still misinterpreted as evidence of Saudi Arabia’s support for Russia, even though the Kingdom and other Gulf states had opted to stay neutral, treating the war in Ukraine in “a fair context” and providing aid to the needy.

In June, Prince Faisal bin Farhan clarified the Kingdom’s position further: “Our stance as Gulf countries regarding the Russian-Ukrainian crisis is unified,” he said on June 1 during a speech at the opening of the 152nd session of the Ministerial Council of the Gulf Cooperation Council.

“Today we had two fruitful meetings with the Russian and Ukrainian ministers, during which we stated our unified stance regarding the Russian-Ukrainian crisis and its negative consequences, namely the food security of the affected countries and the world.”

Saudi Arabia’s decision to remain neutral and prioritize humanitarian engagement during the war also ought to be viewed in the context of public opinion. In a recent Arab News-YouGov poll, of the more than 1,000 Saudis who were asked for their opinion, 14 percent blamed US President Joe Biden for the conflict while 21 percent blamed NATO.

While a high number of Saudi respondents expressed skepticism about NATO’s involvement with the conflict, 41 percent of Saudis said they did not know or were not sure who was to blame.

Throughout the conflict, more than 40 countries, organizations, and individual donors have made pledges and commitments, some of which have made their way to the 6.3 million refugees fleeing Ukraine as well as those who remained. But there is a striking gap between pledged and delivered support.

Thus far, most Western governments have given priority to military assistance over humanitarian aid.

According to the Kiel Institute for the World Economy, the US has pledged $23.8 billion in military aid, the highest number to date, but has only allocated $8.9 billion in humanitarian assistance.

According to the center, that number has since increased but by a relatively small percentage. Similarly, the EU pledged $12.3 billion in military aid but just $1.4 billion has been siphoned for humanitarian response and aid packages.

Since the outbreak of the conflict, Western and Arab governments have been under no illusion that the need for a resolution of the conflict is no less pressing than addressing the humanitarian emergency.

Soon after Biden left the Kingdom, Adel Al-Jubeir, Saudi Arabia’s minister of state for foreign affairs, spoke to CNBC to set the record straight. “We have said from the very beginning, we supported the UN General Assembly Resolution and the inadmissibility abuse of force, about the sovereignty of nations and respect for that,” he said.

“We have called for a peaceful resolution to this; stop the fighting and get to the negotiating table and work out your differences peacefully.

“The concern that we have is that escalation on one side leads to escalation on the other side and before you know it, things are more likely to spin out of control and we all pay the price.”

For good measure, Al-Jubeir said: “We’ve reached out to both Russia and Ukraine. We’ve urged them to move towards a ceasefire settlement and their conflict peacefully. We continue to be engaged with them as are a number of other countries, and our hope is that they will be able to recognize that it’s better to argue across the table from each other than fight across the battlefield, because of the unintended consequences of war and conflict.”

Meanwhile, when it comes to humanitarian giving, Saudi Arabia’s pledges continue to be matched by its actions.

On Friday, accompanied by Saad Al-Saleh, the Saudi ambassador to Poland, KSrelief’s Al-Rabeeah visited the UNHCR’s warehouse facilities in Rzeszow in Poland. They jointly inspected the aid already provided as part of the Kingdom’s $10 million grant to support Ukrainian refugees. 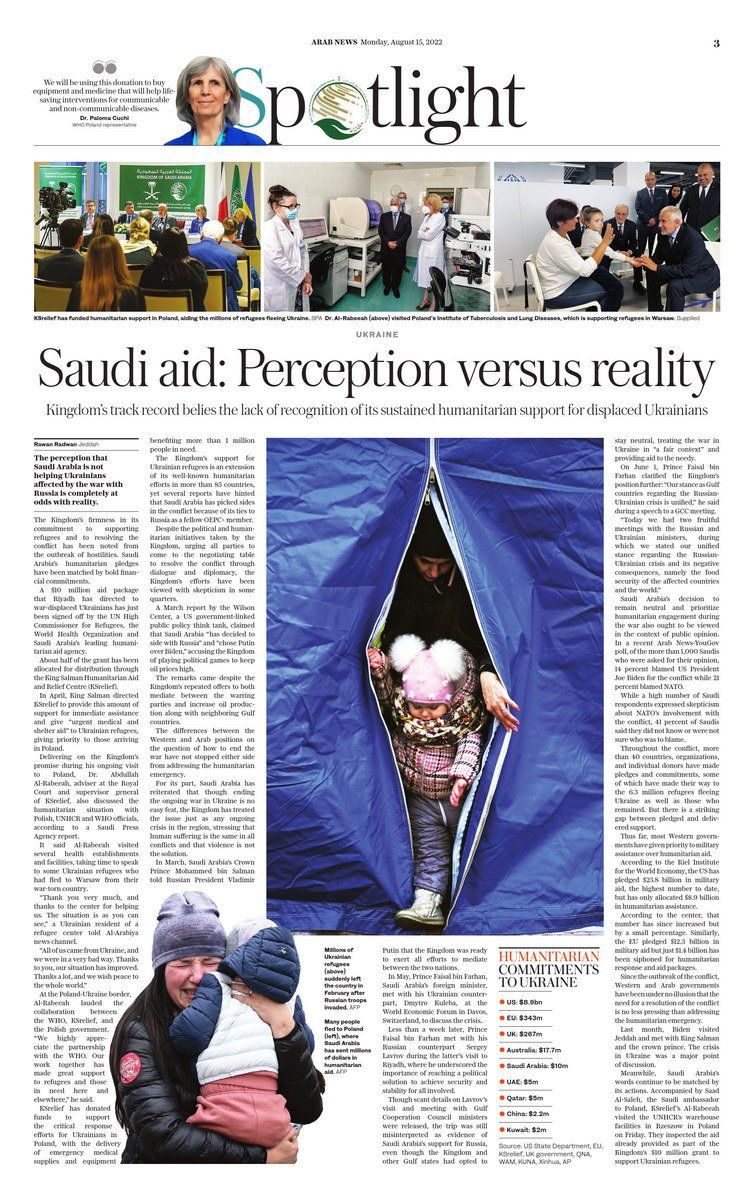 These were the details of the news Saudi agriculture convoy sows the seeds of new knowledge to Abha farmers for this day. We hope that we have succeeded by giving you the full details and information. To follow all our news, you can subscribe to the alerts system or to one of our different systems to provide you with all that is new.