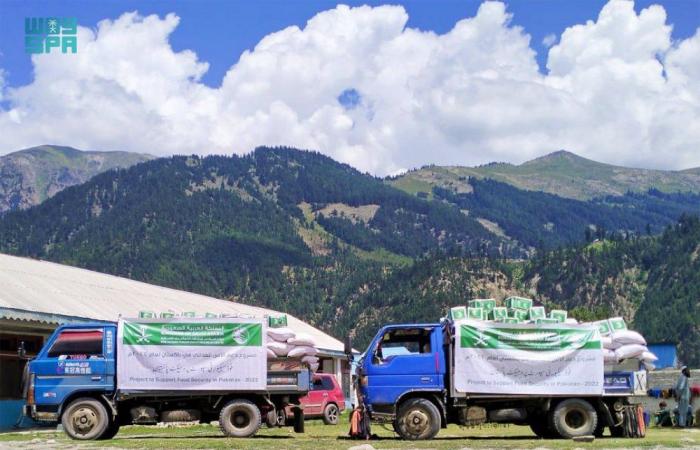 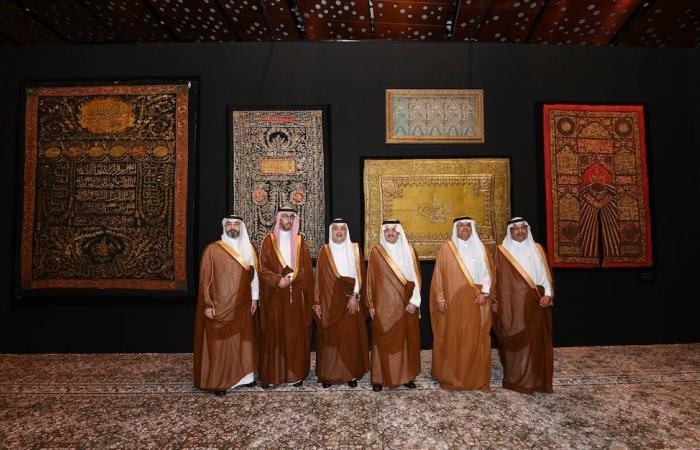 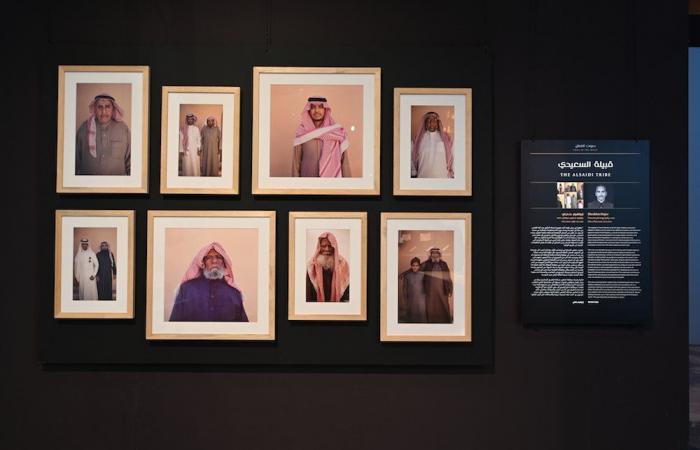 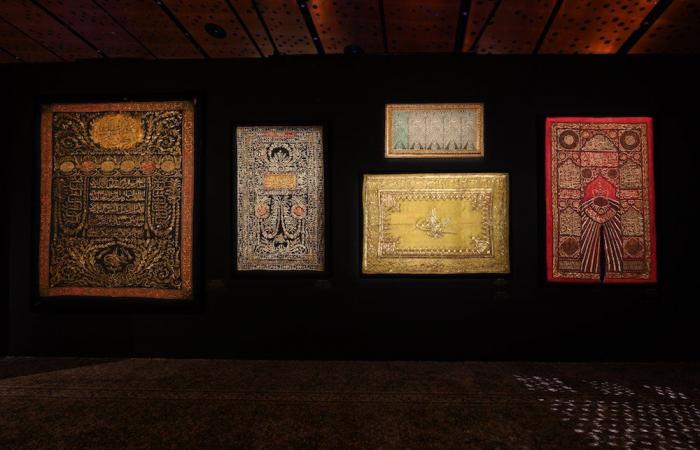 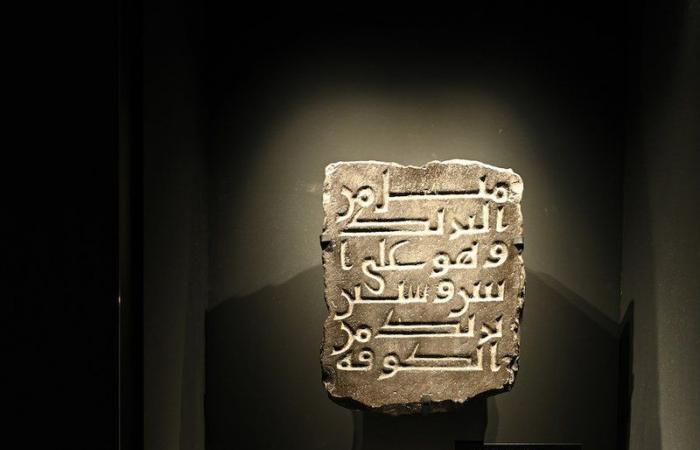 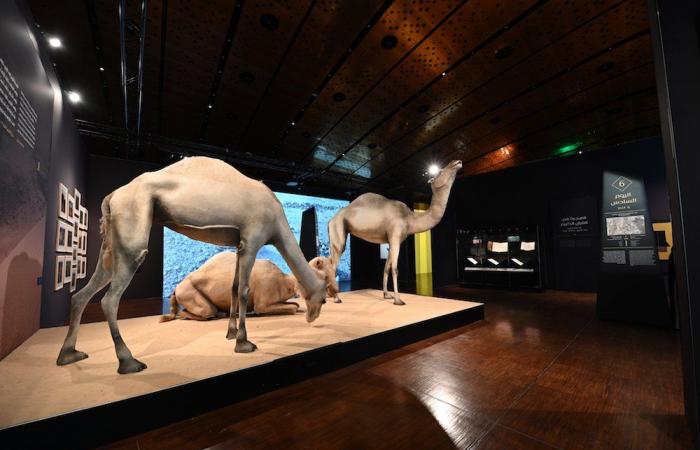 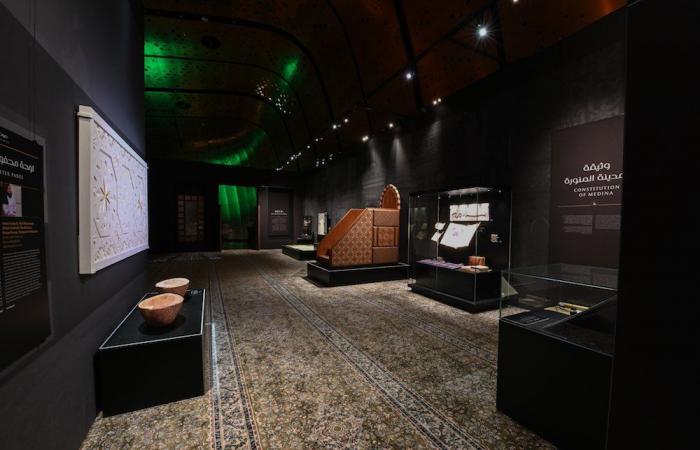 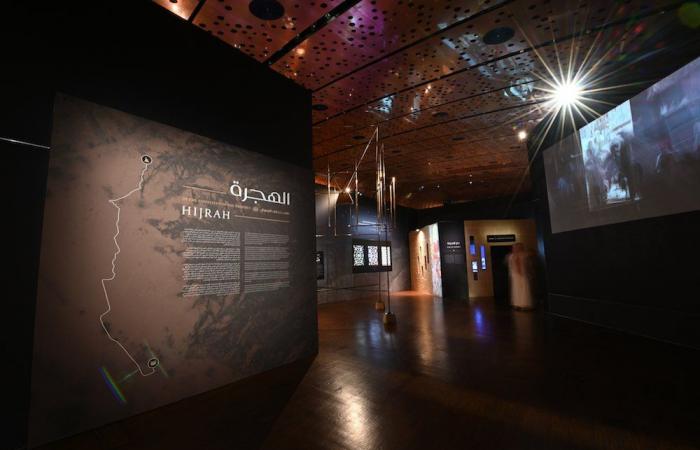 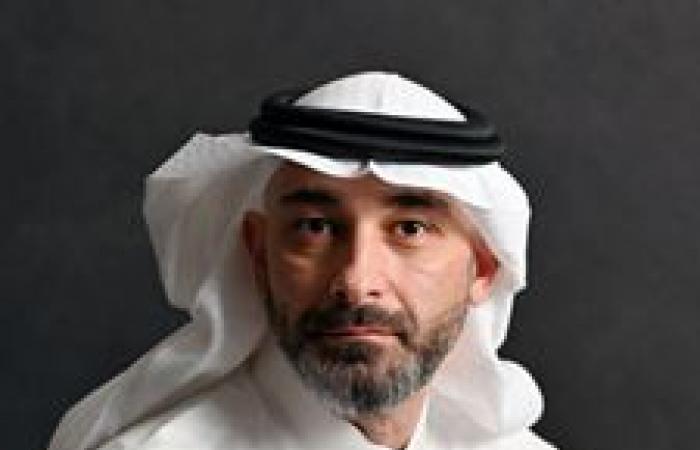 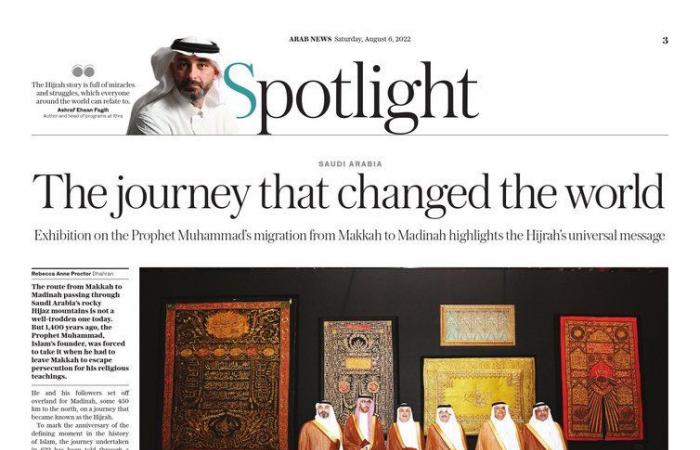 DHAHRAN: The route from Makkah to Madinah passing through Saudi Arabia’s rocky Hijaz mountains is not a well-trodden one today. But 1,400 years ago, the Prophet Muhammad, Islam’s founder, was forced to take it when he had to leave Makkah to escape persecution for his religious teachings.

He and his followers set off overland for Madinah, some 450 kilometers to the north, on a journey that became known as the Hijrah.

To mark the anniversary of the defining moment in the history of Islam, the journey undertaken in 622 has been told through a comprehensive exhibition in Dhahran, in the Kingdom’s Eastern Province. The display aims to share the impact and relevance of the Hijrah through its themes of love, peace, freedom, tolerance, perseverance, courage, and companionship.

Ashraf Ehsan Fagih, head of programs at the King Abdulaziz Center for World Culture (Ithra) where the exhibition is currently taking place, told Arab News: “We are targeting a global audience, not Arabs or Muslims per se, with this exhibition. We are targeting everyone who wants to be enlightened by the universal messages of Hijrah.”

Ithra is one of the Kingdom’s foremost cultural institutions, built by Saudi Aramco and inaugurated by King Salman in December 2016.

The team at Ithra spent three years preparing the exhibition, titled “Hijrah: In the footsteps of the Prophet,” which will run for five years. Following its initial nine months at Ithra, the exhibition will move to Riyadh and Jeddah before heading overseas.

It was curated by Ithra’s in-house team of experts in collaboration with Dr. Abdullah Hussein Alkadi, who is considered the world’s leading authority on the Hijrah and one of the greatest living biographers of the Prophet Muhammad.

The first-of-its-kind exhibition charts the sequence of events which led to the Prophet Muhammad’s decision to leave Makkah for the city of Yathrib, the pre-Islamic name of Madinah, and the struggles he faced along the way.

Following threats and persecution by the Makkans, culminating in an attempt on his life, the Prophet Muhammad and his father-in-law, friend and companion, Abu Bakr, and his small band of followers set off for Yathrib, where he was warmly welcomed by the Ansar, or helpers — members of the region’s Al-Khazraj and Al-Aws tribes.

In recognition of their generosity, the city was later renamed Al-Madinah Al-Munawwarah, meaning The Enlightened City.

“The Hijrah journey marks the passage of time and the beginning of the Islamic calendar and for over 1 billion Muslims all over the world Hijrah is considered the mother of all journeys,” Idries Trevathan, Ithra’s in-house curator of Islamic art and culture, told Arab News.

“It marks when the Prophet Muhammad and his followers went from being a persecuted minority to being a community in world civilization. It was the most important event of his life, and it changed the course of history.”

To curate the exhibition, the team extracted the story from old manuscripts written during the first century of Islam, before, as Fagih described, they “walked the walk.” The team spent around a month trekking from Makkah to Madinah, following in the footsteps of the Prophet Muhammad.

“We spent days climbing to the tops of various caves, experiencing muscle soreness, and also admiring the beauty of the landscape. We experienced the perseverance the Prophet Muhammad needed for the journey.”

A documentary about Trevathan and Almusaly’s journey in the Prophet Muhammad’s footsteps is currently in production and due for public screening at the end of this year.

Trevathan recalled that the journey was strenuous but deeply rewarding.

“When you walk the route, it is a spiritual experience. It is difficult, and most of the route is still inaccessible by car. You must walk it,” he said. “It was an enormous privilege to walk that route myself and to have a connection with the Prophet Muhammad through the landscape.

“What we wanted to draw upon in the exhibition were these incredible traditions in pre-Islamic culture but also in what is known as wuquf ‘ala al-atlal, or stopping by the ruins, to contemplate what happened there.”

The exhibition was established in collaboration with the Prince of Wales’ Turquoise Mountain, a charity supporting arts and heritage in the Middle East, the National Museum of Saudi Arabia in Riyadh, the House of Islamic Arts in Jeddah, and the King Abdulaziz Complex for Endowment Libraries in Madinah, all of which contributed pieces to the display.

It includes Islamic artifacts, specially commissioned contemporary artworks by Saudi and Arab artists, as well as interactive installations, photography, and videos, which recreate the experience of the Prophet Muhammad’s arduous journey.

“We wanted to create something exceptional and different to commemorate Hijrah. When the Prophet Muhammad left his tribe 1,400 years ago, it was unheard of, because back then you were defined by your tribe,” Fagih said.

“What happened was miraculous in all aspects. He abandoned his tribe, he was accepted by other tribes in a different town, and they accepted him as a leader of society.”

* Curators of the exhibition travelled the length of the Hijrah route, much of which is inaccessible by road.

* Organizers say the exhibition’s aim is to make the Hijrah story accessible to an international, non-Muslim audience.

In sum, Fagih said: “The Hijrah story is full of miracles and struggles, which everyone around the world can relate to. Being lonely is one of them. The Prophet Muhammad was 53 years old at the time of Hijrah. He was given another chance and he succeeded. He lived only another 10 years.”

The story is also one of humility, hardship, and beauty, whereby the past and present intertwine in a fully immersive recollection of the journey.

“When the Ansar took in these migrants from Makkah and the preparation of the constitution of Madinah set down how migrant communities are treated, this was setting up a precedent for later generations,” Trevathan said.

“Despite his persecution in Makkah, when the Prophet Muhammad arrived in Madinah, he prepared this constitution, which protected the rights of all religions and communities in Madinah.”

According to Trevathan, in contrast with acts of persecution often seen in the news today, “some of the oldest religions you find are in the Middle East because they were preserved by Muslim civilization, which goes back to Prophet Muhammad’s constitution.”

The theme of brotherhood is also emphasized throughout the show. Indeed, the Prophet Muhammad and his followers were accepted as muhajirun, or immigrants, by the feuding Al-Khazraj and Al-Aws tribes, who overcame their differences to serve a greater common cause.

This is viewed as one of the miracles of Hijrah and a lesson about tolerance, which the organizers hope will resonate with global audiences.

The inclusion of many contemporary artworks from throughout the Islamic world is also viewed as a potential draw that couches the values and ongoing significance of Hijrah in a modern context.

“The balance between Islamic and contemporary art throughout this exhibition is important to show the evolution and progression of the narrative of this exhibition in our modern day,” Farah Abushullaih, head of Ithra Museum, told Arab News.

“By providing content that speaks to both types of work throughout the journey of the Prophet Muhammad, we take an abstract concept and try to bridge the gap of stories from a collective narrative to a more tangible contemporary perspective.”

For example, the idea of brotherhood is poignantly expressed in a contemporary art installation by Saudi artist Zahrah Al-Ghamdi, one of the Kingdom’s most recognized female artists, whose work has been shown at the Venice Biennale, The British Museum, and Desert X Coachella in California.

Al-Ghamdi’s installation, aptly titled “Brotherhood,” features knots made out of fabric and clay, depicting how the Ansar, “selflessly welcomed the muhajireen into their home, supporting them by sharing everything they owned.”

In a statement ahead of the exhibition, she said: “I wanted to create an artwork that highlights this bond and the strength of their roots in creating a fruitful relationship. The knots signify close relationships rich in love between the muhajireen and the Ansar.”

Also among the contemporary works is Moroccan Younes Rahmoun’s painted copper object titled “House-Boat,” which reflects on the Hijrah theme of migration.

Nuria Garcia Masip, a Spanish master calligrapher, created “Umm Ma’Bad Hilye,” a calligraphic work about Umm Mabad, an elderly woman from the tribe of Khuza’ah, who the Prophet Muhammad met during the Hijrah and who later moved to Madinah to embrace Islam.

The Hilye, or calligraphic panel, created by Masip presents the encounter in exquisite 22-carat gold and gouache pigments on paper.

“I found it remarkable that the words of this Bedouin woman describing the Prophet Muhammad have been transmitted and preserved over time so beautifully,” Masip told Arab News.

“As a female artist, I was doubly inspired and honored to be able to write and compose her words into a hilye, which is, in essence, a calligraphic icon of the prophet.”

Also commissioned specially for the exhibition were several works by master craftsmen from Afghanistan, India, Saudi Arabia, and Syria. Their work, using age-old techniques, pays homage not only to the story of Hijrah but to Islamic heritage and its preservation.

Thalia Kennedy, creative director at Turquoise Mountain, said: “So many of the craftsmen who made pieces for the exhibition have experienced such great challenges in their own lives, so I think creating these pieces that were about Hijrah and the mosque in Madinah has a personal resonance for them.

“This is a story of perseverance and of overcoming challenges and finding new places of spirituality.” 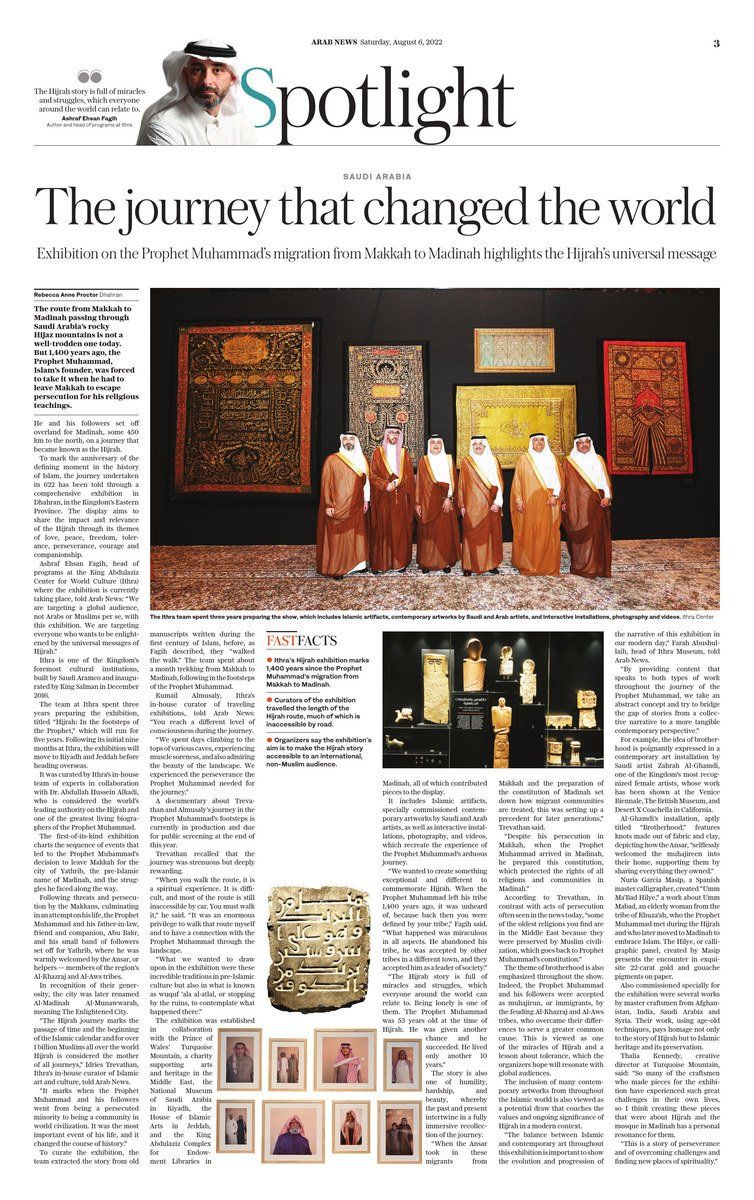 These were the details of the news Saudi Arabia continues its global aid work for this day. We hope that we have succeeded by giving you the full details and information. To follow all our news, you can subscribe to the alerts system or to one of our different systems to provide you with all that is new.

PREV Diriyah, Jewel of the Kingdom: Celebrating 5 years of a painstaking restoration plan at Diriyah
NEXT ThePlace: Tabuk Archaeological Castle, an ancient fortress on the Levant-Madinah Hajj road