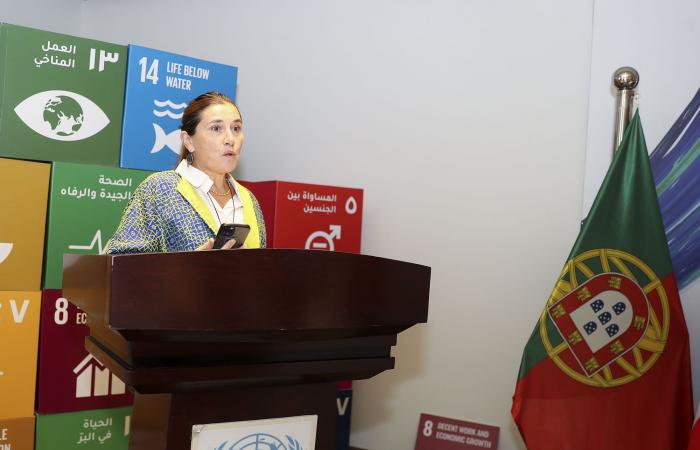 Jeddah - Yasmine El Tohamy - RIYADH: The UN resident coordinator in Saudi Arabia on Tuesday praised the Kingdom for stepping up its commitment to the environment by launching initiatives aimed at addressing the devastating effects of climate change.

In her opening remarks at Riyadh Blue Talk, an event organized by the UNRC office and the embassies of Portugal and Kenya to raise awareness of oceans ahead of the 2022 UN Ocean Conference to be held in Lisbon next month, Nathalie Fustier said:

“In recent years, Saudi Arabia has stepped up its commitment to the environment and launched last year the Middle East and the Saudi Green Initiatives aimed at addressing some of the devastating effects of climate change. Recently, the Saudi government announced the establishment of the Red Sea Authority, a new body to protect the coral reefs and sea turtles in the Red Sea.

“Saudi Arabia has more than 2,000 km of coastline, the largest in the region, with 30 percent of the Kingdom’s population living within 100 km of a coastline. This enormous coastline is home to diverse marine ecosystems and the basis for the future blue economy of the Kingdom.

“Considering the valuable contributions and efforts that Saudi Arabia has made to the conservation of marine environment at national, regional, and global levels, we are glad to gather stakeholders from government, private sector, civil society, academia, regional and international organizations to exchange knowledge and solutions and build partnerships to solve pressing challenges.”

The environment is a priority for the UN and the Kingdom. The UN in Saudi Arabia supports the Kingdom in its progress toward achieving the UN Sustainable Development Goals and Vision 2030, she added.

“We are working on a five-year development cooperation framework with the government which has a strong focus on ‘planet.’ We have also established a dedicated Environment, Natural Resources, and Climate Advisory Working Group within the UNCT (UN Country Team) to enhance internal UN coordination and improve support to the government in the field of (the) environment.”

The UN secretary-general firmly believed that solutions were possible and the current trends could be reversed to bring considerable improvements to the environment, she said.

“With this optimism in mind, I look forward to learning more and hope that the discussions here will inform the UN Ocean Conference in Lisbon and create new ways of working towards an effective solution to better preserve our oceans.”

In 2016, the Environment Ministry approved a national strategy that included a comprehensive assessment of all environmental challenges and opportunities and an intensified focus on environmental protection.

That was followed by a complete restructuring of institutions working in the environment sector, resulting in the National Center for Environmental Compliance.

It also resulted in the National Center for Waste Management to accelerate work in the Kingdom toward a circular economy, maximizing recycling, minimizing waste generation, maximizing utilization of waste, and reducing waste diversion to landfills.

Peter Thomson, the UN secretary-general's special envoy for the ocean, said: “(The) Ocean’s health is vital to us all. Just consider the fact that over 50 percent of the planet’s oxygen is produced in the ocean. That is why my daily mantra is, ‘No healthy planet without a healthy ocean.’ And the ocean’s health is measurably in decline.

“We can stop the decline of the ocean’s health in 2022 and we made a great start with the consensual agreement at UNEA (UN Environment Assembly) in Nairobi in February to begin work on a binding global treaty to end plastic pollution.

“We must continue this positive momentum by ending harmful fisheries subsidies at the WTO Ministerial Meeting in Geneva, by adopting the 30 by 30 target at the Biodiversity COP in Kunming, and when we gather in Sharm El-Sheikh in November for COP27, by moving the climate finance needle decisively in the direction of the Sustainable Blue Economy.

“2022’s highlight opportunity will be the UN Ocean Conference in Lisbon, in support of SDG14’s implementation. There, we will launch a great fleet of science-based solutions, heavily powered by innovation and partnerships.”

One was about managing, protecting, conserving, and restoring marine and coastal ecosystems. It was moderated by Portuguese ambassador Nuno Mathias. The other was about increasing scientific knowledge and developing research capacity and transfer of marine technology. This was moderated by the Kenyan ambassador Peter Nicholas Ogego.

These were the details of the news UN official applauds Saudi Green Initiative aimed at addressing climate change effects for this day. We hope that we have succeeded by giving you the full details and information. To follow all our news, you can subscribe to the alerts system or to one of our different systems to provide you with all that is new.