“We were living a nightmare” .. Finally Saudi Arabia ends the... 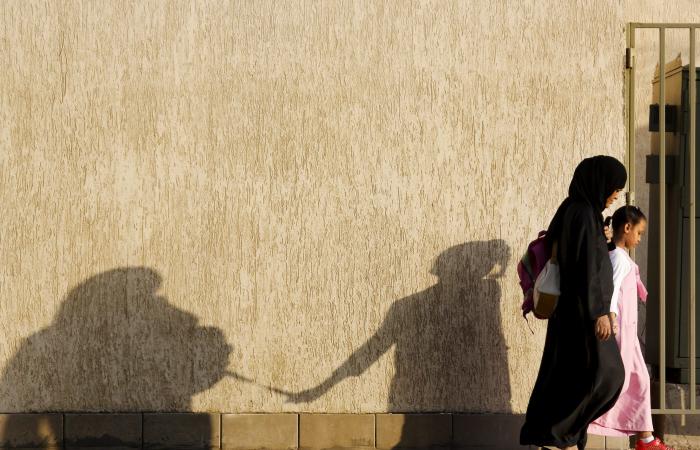 Millions of Saudi children returned to primary schools and nurseries, Sunday, for the first time in nearly two years of studying at home, in one of the longest school closures around the world to limit the outbreak of the Covid-19 disease, which drew widespread criticism from parents.

Returning to schools removed the burden placed on the shoulders of parents of Saudis and foreign workers, as parents said that children faced difficulties in distance learning, while they were seeing the countries of the world opening their schools to receive students, according to a report carried by the newspaper.The Wall Street Journal“.

As for others, they felt that personal education would make their children sick and contribute to the outbreak of the new Corona virus, especially with the spread of the highly contagious “Omicron” strain, which contributed to the rise in cases of the disease to record rates, according to the American newspaper.

At the Beat Hugs Kindergarten in Jeddah, students rushed to salute their teachers and classmates, attended a fun show while some parents brought donuts in a festive mix.

Shagofa Afshan, 39, brought a cake she had prepared for her five-year-old son, on which she wrote: “Go back to school, Hashem.”

She told the newspaper, “I am more happy with my son’s return to school than he is.”

The newspaper notes that Saudi Arabia’s approach to school education during the pandemic “was among the most cautious around the world.”

The school closure, which affected public schools and the private sector alike, was one of the most important decisions taken by Saudi Arabia, which has 35 million people, to confront the pandemic, including the compulsory vaccination that was imposed on almost the entire population.

Few other countries have kept students out of school for longer than Saudi Arabia, and primary school students in Saudi Arabia were among the last around the world to remain committed to homeschooling.

The Kingdom had decided to suspend studies in schools and universities on March 8, 2020. On January 9, the authorities issued a decision to return children aged 5 to 11 years to school.

“We cannot continue to rely on distance education alone,” said Ibtisam Al-Shehri, a spokeswoman for the Ministry of Public Education, in a press conference at the time.

In a kingdom that shows little tolerance for dissent, parents’ anger at school closures has been muted in public. But privately, some families have expressed anger at mothers leaving their jobs to help children learn at home and pay teachers. “.

Saudi national, Laila Ismail, a marketing executive in Jeddah who splits her time between home and office, says she hired a math teacher for her 7-year-old daughter.

“We used to pay the same school fees, but because my husband and I work full-time jobs, we couldn’t stay at home to help the children with their studies, so we had to pay more to get help,” Ismail added.

Osama al-Baghdadi, a pediatrician in Jeddah, confirmed that he was noticing more cases of children, whose anxiety and depression caused by home schooling, caused physical disturbances.

Dina Omar, a 37-year-old mother of three primary school-age children, said she struggled with children staying home all the time, including limiting their time in front of screens.

Omar noted that, with distance education, her children “spend the whole day on the screen and then want to play games or watch videos on an iPad after their lessons.”

The challenges of distance education were not limited to Saudi Arabia alone, but rather it is a problem faced by school officials around the world, and they tried to balance the impact of long-term closures on young minds and working parents, compared to the threat of the spread of the virus.

Studies have shown that those who have received distance education suffer from a lack of education and a decline in social and emotional skills.

And with the challenges that the mutated “Omicron” strain brings in the high incidence of HIV infection, reaching 5,928 cases during the previous week only, officials in Saudi Arabia are taking precautions in returning students to schools, with the distribution of masks, hand sanitizers and social distancing measures, while the chances of contact between students decrease, As the morning gatherings were canceled, the lunch period was divided into different times, to which the classes were subjected separately.

As for distance education, it will continue for some students who suffer from health conditions, and infection with the virus may threaten their lives.

Although the Kingdom did not witness a rise in infections with the disease when the preparatory and secondary education opened last August, according to officials, children between 5 to 11 years are not obliged to take the vaccine in the Kingdom.

Abeer Harami, 47, the mother of five-year-old twins, fears that they are not conscious enough to realize the seriousness of the pandemic, expressing concern about their commitment to preventive measures.

She adds to the newspaper that, although she is relieved that her two children are back in school, she is afraid at the same time, and says: “I am afraid that other parents will be reckless and send their sick children to school.”

These were the details of the news “We were living a nightmare” .. Finally Saudi Arabia ends the... for this day. We hope that we have succeeded by giving you the full details and information. To follow all our news, you can subscribe to the alerts system or to one of our different systems to provide you with all that is new.