There is no need for Libyans anymore to knock on the... 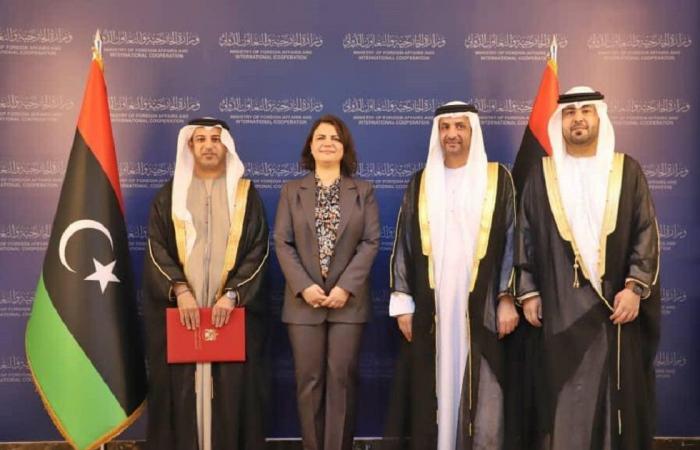 Libya and the UAE agreed on Monday to allow Libyans to apply for the UAE visa electronically, without the need to go to the UAE embassies.

This came during the reception of the Minister of Foreign Affairs and International Cooperation in Libya, Najla Al-Manqoush, Ambassador Mohammed Ali Al Shamsi, the new ambassador of the UAE, who presented her with a copy of his credentials as his country’s ambassador to Libya.

At the outset of the meeting, the ambassador conveyed the greetings of UAE Foreign Minister Sheikh Abdullah bin Zayed Al Nahyan to the minister.

Muhammad Ali Al Shamsi affirmed his country’s support for the efforts made by the national unity government to achieve stability in all of Libya. He also reiterated his country’s keenness to enhance and develop joint cooperation in the interest of the two peoples.

The Libyan Foreign Ministry stated that the importance of promoting economic cooperation, renewable energy and investments was emphasized during the meeting, in addition to activating the joint committee between the two countries, and benefiting from the UAE experience in the field of development and reconstruction.

In another context, the Ministry of Foreign Affairs of the Government of National Unity in Libya condemned the kidnapping perpetrated by the Houthis against a civilian cargo ship carrying the UAE flag, which was loaded with equipment from the Saudi field hospital.

She stressed that this is a flagrant violation of the freedom of maritime navigation and transit trade in the Bab al-Mandab strait and the southern Red Sea, and represents a violation of international laws and norms.

The Libyan diplomacy stressed that this is a dangerous development that threatens the security and safety of maritime navigation, a threat to the economy and international trade, and a war crime.

She explained that such actions increase the conflict and increase its intensity between the conflicting parties, and undoubtedly contribute to prolonging the suffering of the Yemeni people.

These were the details of the news There is no need for Libyans anymore to knock on the... for this day. We hope that we have succeeded by giving you the full details and information. To follow all our news, you can subscribe to the alerts system or to one of our different systems to provide you with all that is new.