Al-Harthy is the president of the Arab Radio and Television Union,... 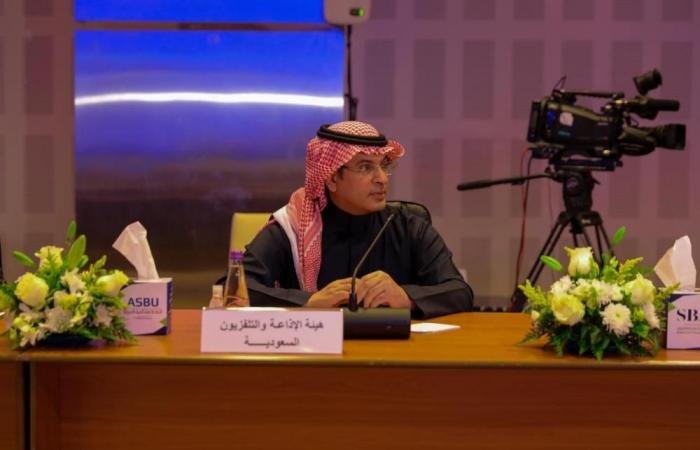 Al-Harthy said that the media industry has become a complex process facing many difficult challenges, but at the same time it has created many opportunities for leadership and creativity for those who have a clear vision and vision that foresee the future in pursuit of its industry.

At the conclusion of his speech, the President of the Arab States Broadcasting Union expressed his pride in the praises that reached the Kingdom during the work of the Union’s meeting held in Riyadh, indicating that this meeting is only the beginning of an important role that the Kingdom of Saudi Arabia is working to activate in order to advance media competition in accordance with the highest international standards. He thanked the members of the union, the outgoing president of the union, Mohamed Abdel Mohsen Al-Awash, and the director of the union, Engineer Abdel Rahim Suleiman

It is noteworthy that the presidency of the Union is a site that combines the strategic and executive aspects, where the leader contributes with his idea and vision in presenting projects, developing the Union and its work and urging him to achieve various successes through his supervision of all the work of the Union, its organs and committees.

The Kingdom’s leadership of these leadership positions in the organizations represents a strength in the presence of the state and its positive impact on media work in order to achieve its aspirations at all levels.

The Kingdom is constantly seeking to enhance the role of the Union in the Arab member states and the sustainability of its services to poor countries and those in need of technical and media support from the member bodies, and is keen to ensure that the Union plays its professional media role away from quarrels and political events.

Al-Harthy is a Saudi writer and journalist with more than 25 years of experience in the media field. He holds a master’s degree in international journalism from City University of London, UK, and a bachelor’s degree in architecture. He is the President of the Saudi Media Forum and President of the Saudi Media Award. Member of the Board of Directors of the World Association of Newspapers and News Publishers. He was the editor-in-chief of the English-language Arab News newspaper and Sayidaty wa Al-Ragal magazine.

He started his work as a journalist for the Asharq Al-Awsat newspaper in London and then worked as a visiting journalist for the British Financial Times. He has received international awards, including the Gulf Excellence Award in 2002 in honor of achievements in the fields of editorial and print journalism. And the Media Creativity Award in Beirut in 2014 for his success in the world of print, visual and digital media.

These were the details of the news Al-Harthy is the president of the Arab Radio and Television Union,... for this day. We hope that we have succeeded by giving you the full details and information. To follow all our news, you can subscribe to the alerts system or to one of our different systems to provide you with all that is new.