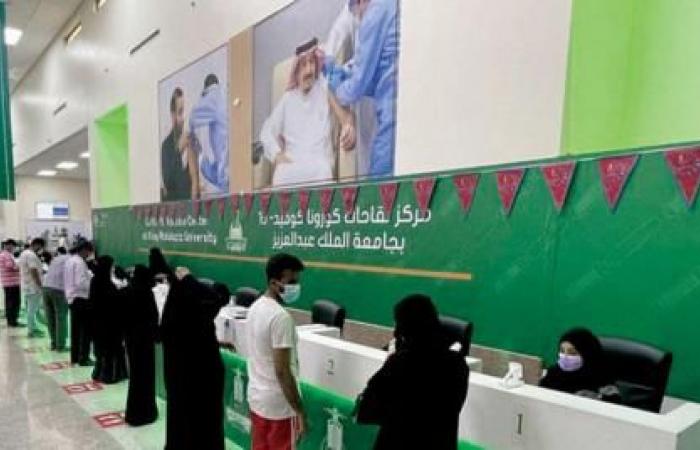 The number of daily infections with the “Covid-19” virus in Saudi Arabia has continued to drop below the 300-point barrier, since last February.
Yesterday (Thursday), the Saudi Ministry of Health announced the registration of 290 new cases of the virus, 535 people recovered, and 7 people died, bringing the number of active cases to 3,889, of whom 1,061 are in critical condition.
The number of distributed doses reached more than 35 million and 161 thousand doses, taken by about 22 million people, of whom more than 13 million received two doses of the vaccine, bringing the proportion of those vaccinated with two doses in Saudi Arabia to 39 percent.
Saudi Arabia continues to implement a package of precautionary measures aimed at preventing the spread of the virus, such as maintaining the rules of distancing, imposing the wearing of a face mask, and preventing entry to public places and government and private headquarters for those who are not vaccinated with the vaccine.
In another context, the Sultanate of Oman announced that all its air, land and sea ports will be opened to travel for all nationalities, starting from the beginning of next month, September, “while taking precautionary measures”, nine months after the decision to close to combat the outbreak of the “Corona” pandemic.
The Assistant Inspector General of Police and Customs, Hamad Al Hatmi, said: “Starting from the first of next September, the air, land and sea ports of the Sultanate will be open to all, while taking precautionary measures to prevent the spread of the Corona virus,” according to the Omani News Agency.
During a press conference held by the Supreme Committee in charge of examining a mechanism for dealing with developments resulting from the spread of the “Covid-19” virus, in Muscat yesterday, Dr. Saif Al-Abri, Director General of Disease Control and Control at the Ministry of Health announced that land, sea and air ports will be opened for all travelers starting from the beginning of the month. Present.
Al-Abri said: “The land ports between the Sultanate and the United Arab Emirates will be opened starting from the first of next September, according to the conditions set by the Supreme Committee, including taking the vaccine and examination before coming to the port and not upon arrival.”
According to the Ministry of Health, obtaining the two doses of an anti-virus vaccine will be compulsory for citizens and residents, starting from the beginning of next October. The committee announced that “starting from the first of September, the return to work will be 100 percent for all public sector employees, as it is required to take the vaccine.” While Dr. Ahmed Al-Saidi, Minister of Health, said during the press conference, that “it will not prevent any citizen abroad who has not received the vaccination against Covid-19 from returning to the Sultanate, provided that the approved health procedures are adhered to.”
The Minister of Health continued: “There is a tendency to expand campaigns to vaccinate residents, especially those whose companies and their sponsors did not care to vaccinate them.” He said, “We will intensify vaccination campaigns for residents in the Sultanate, because they are partners in the development and management of the pandemic in the health sector.”
He pointed out that “the only approved vaccine for a single dose globally is Johnson & Johnson, and it has not been used in the Sultanate yet,” noting that the Sultanate is seeking to obtain 500,000 doses of the Sinovac vaccine.

These were the details of the news Saudi Arabia records the lowest number of “Covid-19” injuries for this day. We hope that we have succeeded by giving you the full details and information. To follow all our news, you can subscribe to the alerts system or to one of our different systems to provide you with all that is new.