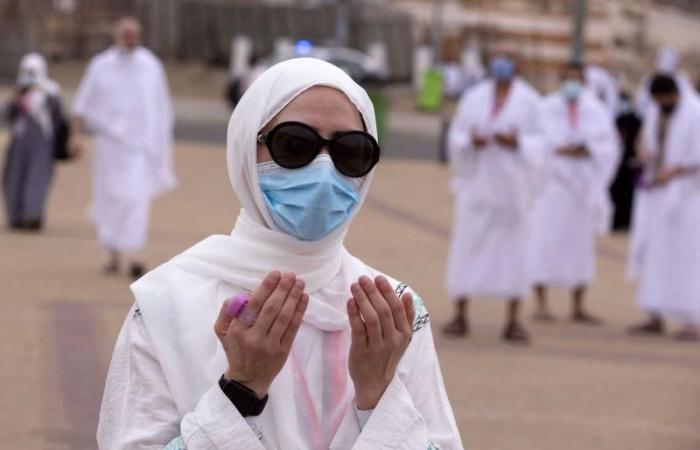 We show you our most important and recent visitors news details Pandemic transforms hajj, future of pilgrimage in the following article

A Muslim pilgrim prays in front of the rocky hill known as Mountain of Mercy, on the Plain of Arafat, during the annual hajj pilgrimage, July 19. (AP)

Tens of thousands of vaccinated Muslim pilgrims circled Islam’s holiest site in Mecca on Sunday, but remained socially distanced and wore masks as the coronavirus takes its toll on the hajj for a second year running.

What once drew some 2.5 million Muslims from all walks of life from across the globe, the hajj pilgrimage is now almost unrecognisable in scale.

The pared down hajj of this year and last, due to the COVID-19 outbreak, not only impacts the ability of people outside Saudi Arabia to fulfill the Islamic obligation but also the billions of dollars annually that Saudi Arabia draws from being custodian of its holy sites.

The Islamic pilgrimage lasts about five days, but traditionally Muslims begin arriving in Mecca weeks ahead of time. The hajj concludes with the Eid al-Adha celebration, marked by the distribution of meat to the poor around the world.

This year, 60,000 vaccinated Saudi citizens or residents of Saudi Arabia have been allowed to perform the hajj due to continued concerns around the spread of the coronavirus. It is a far greater figure than last year’s largely symbolic hajj that saw fewer than 1,000 people from within the kingdom taking part.

With no clear or agreed-upon standard for a vaccine passport, vaccine inoculation rates vastly uneven and new variants of the virus threatening the progress already made in some nations, it is unclear when Saudi Arabia will play host again to the millions more Muslim pilgrims it planned to receive in years to come.

The kingdom has gone to great lengths to ensure the annual hajj continues uninterrupted, despite changes caused by the pandemic.

Robots have been deployed to spray sanitising disinfectant around the cube-shaped Kaaba’s busiest walkways. It is here where the hajj pilgrimage begins and ends for most.

Saudi Arabia is also testing a smart bracelet this year in collaboration with the government’s artificial intelligence authority. The touchscreen bracelet resembles the Apple Watch and includes information on the hajj, the pilgrim’s oxygen levels and vaccine data and has an emergency feature to call for help.

International media outlets already present in the kingdom were permitted to cover the hajj from Mecca this year, but others were not granted permission to fly in as had been customary before the pandemic.

Cleaners are several times a day sanitising the vast white marble spaces of the Grand Mosque that houses the Kaaba.

“We are sanitising the floor and using disinfection liquids while cleaning it two or three times during (each) shift,” said Olis Gul, a cleaner who said he has been working in Mecca for 20 years.

The hajj is one of Islam’s most important requirements to be performed once in a lifetime. It follows a route the Prophet Muhammad walked nearly 1,400 years ago and is believed to ultimately trace the footsteps of the prophets Ibrahim and Ismail, or Abraham and Ishmael as they are named in the Bible.

The hajj is seen as a chance to wipe clean past sins and bring about greater unity among Muslims. The communal feeling of more than two million people from around the world, Shia, Sunni and other Muslim sects, praying together, eating together and repenting together has long been part of what makes hajj both a challenging and transformative experience.

There are questions around whether the hajj will be able to again draw such large numbers of faithful, with male pilgrims forming a sea of white in the terrycloth garments worn to symbolize the equality of mankind before God and women forgoing makeup and perfume to focus inwardly.

Like last year, pilgrims will be drinking water from the holy Zamzam well in packaged plastic bottles. Pilgrims will also have to carry their own prayer rugs, were provided with umbrellas to shield them from the sun and must follow a strict schedule via a mobile app that informs them of when they can be in certain areas to avoid crowding.

“I hope this is a successful hajj season,” said Egyptian pilgrim Aly Aboulnaga, a university lecturer in Saudi Arabia. “We ask God to accept everyone’s hajj and for the area to be open to greater numbers of pilgrims and for a return to an even better situation than before.”

Prior to the outbreak of COVID-19, the kingdom was working to vastly expand Mecca’s ability to host pilgrims with a $60-billion Grand Mosque expansion. On the mosque’s south side stands the 1,972-foot (600-meter) clock-tower skyscraper, part of a completed seven-tower complex that was built to accommodate high-end paying pilgrims.

The kingdom, with a population of more than 30 million, has reported over half a million cases of the coronavirus, including more than 8,000 deaths. It has administered nearly 20 million doses of coronavirus vaccines, according to the World Health Organisation.

These were the details of the news Pandemic transforms hajj, future of pilgrimage for this day. We hope that we have succeeded by giving you the full details and information. To follow all our news, you can subscribe to the alerts system or to one of our different systems to provide you with all that is new.