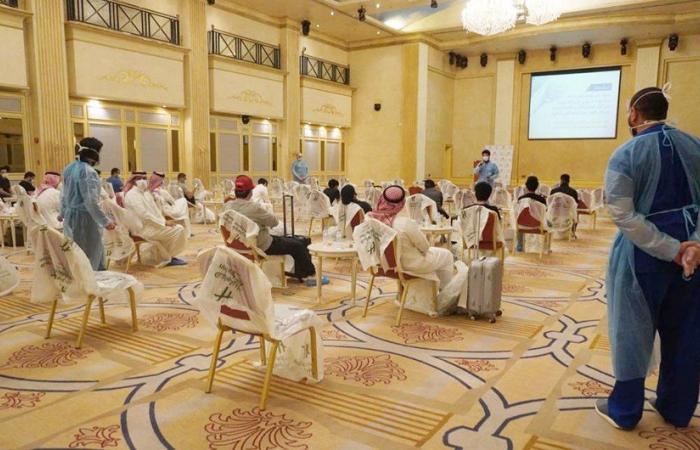 Thank you for reading the news about Quarantine violators to face prison, fines in Saudi Arabia and now with the details

Jeddah - Yasmine El Tohamy - JEDDAH: For more than three days, the name “Um-Ziyad” has been the talk of the town after a video by a so-called social activist circulated on various platforms portraying the greengrocer in the most negative light, only to have the tables turned against him.
The video showed a makeshift vegetable display on a street corner with a woman in the background quizzed by a man about her nationality, her reason behind selling the vegetables in the street, her social security status, and criticizing her for supposedly refusing to request government support.
Though he refrained from showing her face, Um-Ziyad was later identified as a greengrocer who sells vegetables every day in various Dammam neighborhoods. She was then approached by Saudi media outlets and told her story.
With nine children, an ailing mother and grandmother to support, she said that she’d been selling vegetables for three years, personally selecting the produce herself and moving from one neighborhood to the next supplying goods for reasonable prices. She told Al-Arabiya news channel that her daily income was barely SR200 ($53), half of which is given to her mother.
“I’m not a beggar, I’m only here to sell produce to provide food and clothing for my children,” she told Al-Arabiya. “I’ve never been put in such a situation before and I’m my family’s sole breadwinner.”
The video began with a display of fruits and vegetables and a man asking a woman what she was selling. Soon after, the line of questioning became accusatory and he asked her what would happen if he called the police on her. He later accused her of denying the Kingdom’s generosity for helping those in need and that she would rather “torture herself under the sun” for pity.
Social media platforms, particularly Twitter, were full of support for the greengrocer after the circulation of the video portraying a classic case of cyberbullying. It was later brought to the attention of officials in the Eastern Province and Deputy Gov. Prince Ahmed bin Fahd bin Salman bin Abdul Aziz called Um-Ziyad to show support. She has since been given a permanent kiosk in one of Dammam’s vegetable markets at his request.
Deemed unacceptable and considered a form of abuse, according to UNICEF cyberbullying is bullying through the use of digital technologies. It can take place on social media and other platforms, and face-to-face bullying and cyberbullying can often happen alongside each other. However, cyberbullying leaves a digital footprint — a record that can prove useful and provide evidence to help stop the abuse.

• Cyeberbullying is bullying using digital technologies that can take place on social media and other platforms.

• Um-Ziyad, a mother of nine, supported her family with $50 a day received a permanent vegetable kiosk in Dammam.

• The Public Prosecution has summoned the so-called social activist who posted the video.

Speaking to Arab News, Dimah Al-Sharif, a Saudi legal consultant, explained that several laws had been broken and with the video illustrating the crime, the offender could be subject to imprisonment and a fine.
“The first of which was violating Article 3 of the Anti-Cybercrime Law; by invading her privacy through the misuse of camera-equipped mobile phones and the like, defamation and inflicting of damage on her. It does not matter that he refrained from showing her face, he did so in a public setting, regardless of whether her face was shown or not.”
Al-Sharif added that through his line of questioning, he also violated the penal system that stipulates only security officers or criminal investigators have the authority to collect evidence, interrogate and follow up on such cases. “This is something not many know or comprehend. He overstepped and infringed on their role,” Al-Sharif said.
Though there have been many efforts by authorities to educate the public about the penalties for abusing social media platforms, Al-Sharif said that more needed to be done. “Some might mean well by publishing these videos but they’re unfortunately falling into a trap and violating people’s privacy,” he said.
The case shows that people need to educate themselves about the system and other practices that could fall under the Anti-Cybercrime Law, and that there is a need to raise awareness about the correct use of social media.
To the disdain of many, the so-called social activist did not give up, claiming that he called the police to deal with the situation and later tried to save face by defending his actions and claiming that he had received praise for his actions.
The Public Prosecution has summoned the man who posted the video. If indicted, he could face up to a year in prison and pay a fine of SR500,000 ($133,333).
“We learned to always give reason of doubt and never judge people that we don’t know, but this video was difficult to watch and abhorrent,” said 29-year-old Faris Abdulhameed, a healthcare worker in Jeddah.
“Though I can’t assume what his intentions were when he recorded the video, there could have been more subtle ways about it. The line of questioning was uncalled for, he disregarded her situation and instead of lending a helping hand, he ridiculed her in public. If he had a positive message to make, that’s not the way. If he’s highlighting the plight of this woman, that’s also not the way. We were not taught to treat people like that and it’s shameful.”
Nezar Abdulkarim, also from Jeddah, added that not only was the behavior abhorrent, it served no purpose.
“What was the point of the video? What was the message behind it all? He clearly was fueled by emotional sentiments that I can’t comprehend and he couldn’t effectively relay his message. This is what cyberbullying is, the video was unnecessary, pointless and unethical. We’re better than this,” Abdulkarim said.

These were the details of the news Quarantine violators to face prison, fines in Saudi Arabia for this day. We hope that we have succeeded by giving you the full details and information. To follow all our news, you can subscribe to the alerts system or to one of our different systems to provide you with all that is new.