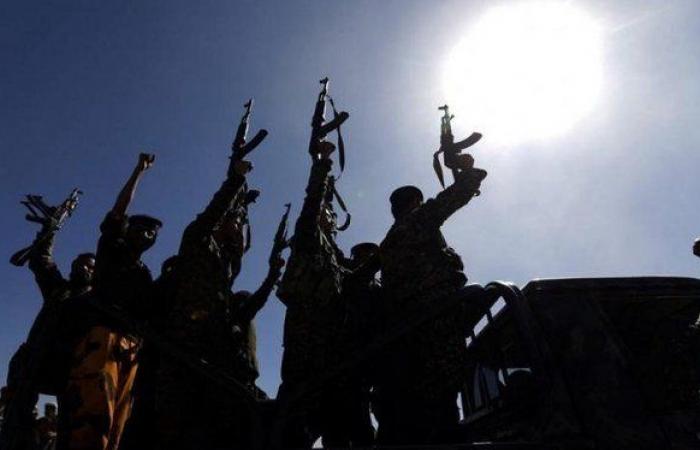 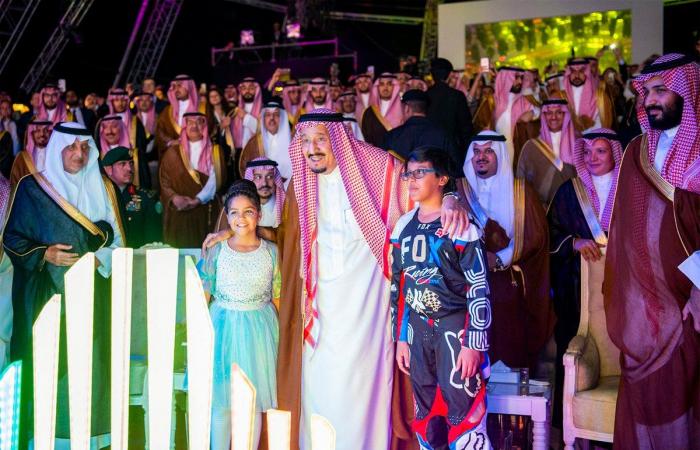 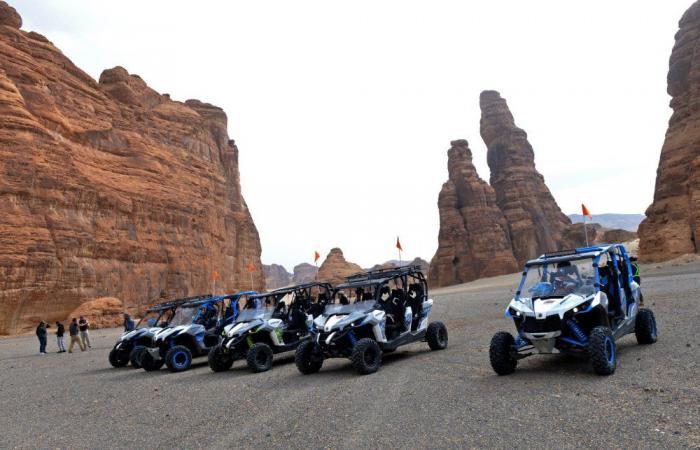 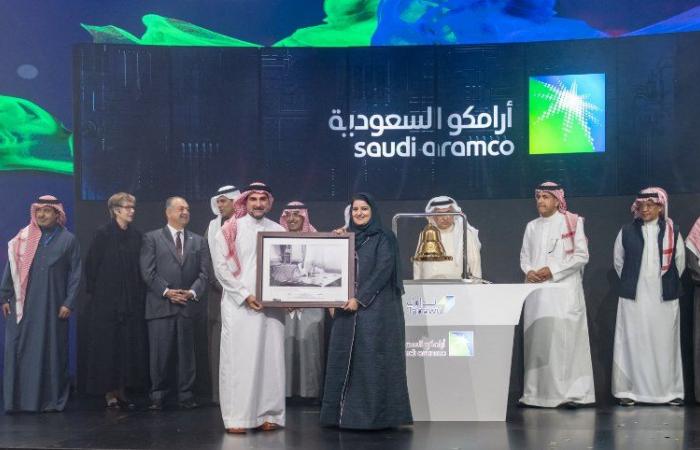 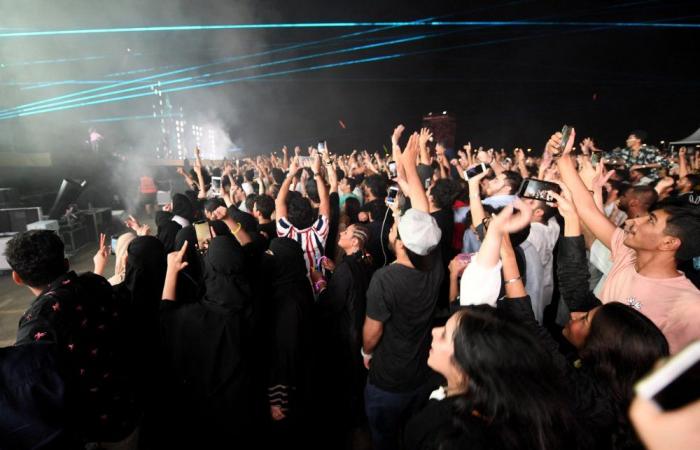 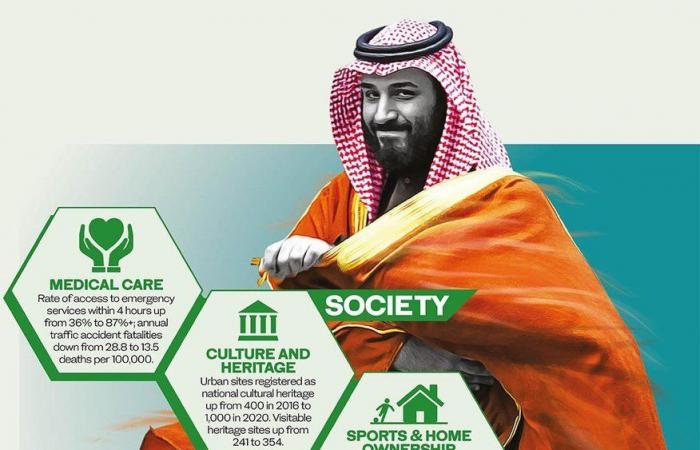 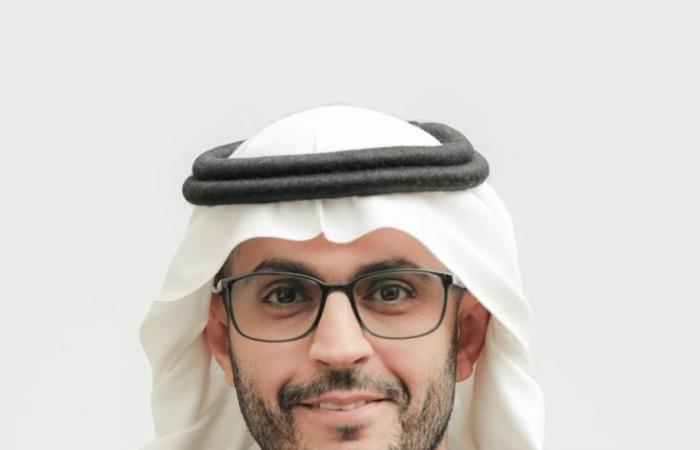 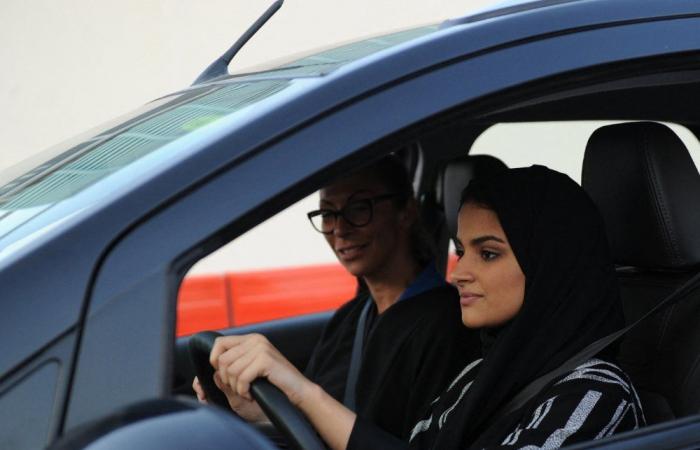 On the same day, in an interview with Al Arabiya news channel, he talked about the Saudi government having targets, key performance indicators, and project management offices, thus charting a new course for a nation with 60 percent of its population aged under 35.

Five years on, in a review of Vision 2030’s results, Saudi Arabia’s Council of Economic and Development Affairs highlighted on Tuesday the achievements covering the three major themes of “vibrant society,” “prosperous economy” and “ambitious nation.”

The council noted that access to emergency health services within 4 hours has improved from 36 percent when Vision 2030 was first inaugurated to 87 percent today. Better road management and enforcement has seen annual traffic accident fatalities fall to 13.5 deaths per 100,000, down from 28.8 when the reforms began.

The number of people participating in sports activities at least once a week has risen from 13 percent prior to the reforms to 19 percent in 2020.

“It helped develop sectors related to life quality, such as sports, entertainment, culture, tourism, and others,” Khalid Albaker, acting chief of marketing and communications at the Quality of Life Program, told Arab News.

“It has also created job opportunities and diversified sources of income and contributed to GDP (gross domestic product).”

With regard to housing, the council noted that the number of homeowners has increased from 47 percent five years ago to 60 percent today as a result of more easily accessible housing assistance.

“This is in parallel with increasing the supply of housing units at reasonable prices, implementing programs specialized in securing housing for society’s underprivileged, developing and improving the legislative and regulative environment for the housing sector, and maximizing the sector’s impact on the overall economy,” Meshaal Al-Shammary, director of Housing VRP 2030’s studies and research department, told Arab News.

Separately, the number of heritage sites that can be visited in Saudi Arabia has risen from 241 in 2017 to 354 last year, creating new jobs in the tourism sector and contributing significantly to GDP, according to the council.

To promote tourism, including religious pilgrimages to the Two Holy Mosques, the Kingdom has streamlined travel documentation. An Umrah visa, which previously took 14 days to process, can now be obtained within 5 minutes, while the tourist e-visa is just a few clicks away, according to the council.

During the same period, seven royal natural reserves to help preserve plant and animal species have been established.

As part of its commitment to combating climate change, the Kingdom has encouraged the concept of a circular carbon economy, adopted by the G20, and expanded its solar, hydrogen and ammonia projects.

Saudi Arabia hopes to obtain 50 percent of its electricity from renewables by 2030. This comes alongside the Saudi Green and Middle East Green initiatives, designed to boost vegetation, reduce carbon emissions, and combat pollution and land degradation.

On the financial front, the Saudi Public Investment Fund (PIF) has doubled to approximately SR1.5 trillion in five years while foreign direct investment has increased from SR5.321 billion to SR17.625 billion.

With the establishment of the Fintech Saudi Center, the Saudi Stock Exchange (Tadawul) has become one of the 10 largest financial markets around the world, according to the Council of Economic and Development Affairs.

“The (coronavirus disease) COVID-19 pandemic has had a positive impact on the speed of adoption of modern solutions and technologies in various financial transactions, especially in financial payments, lending and financing services,” Abdullah Al-Jaidan, a member of the National Committee for Information Technology and Communication at the Council of Saudi Chambers, told Arab News.

One of the overriding goals of Vision 2030 is economic diversification. Long dependent on oil exports, Saudi Arabia’s economy is now branching out. Its non-oil GDP ratio rose from 55 percent in 2016 to 59 percent in 2020. Non-oil revenues also rose from SR166 billion in 2015 to SR369 billion last year.

Saudi Arabia is now a digitally competitive nation. It is ranked sixth among the G20 states in the Global Cybersecurity Index of the International Telecommunication Union, having expanded connectivity from 1.2 million homes in 2017 to 3.5 million by 2020. 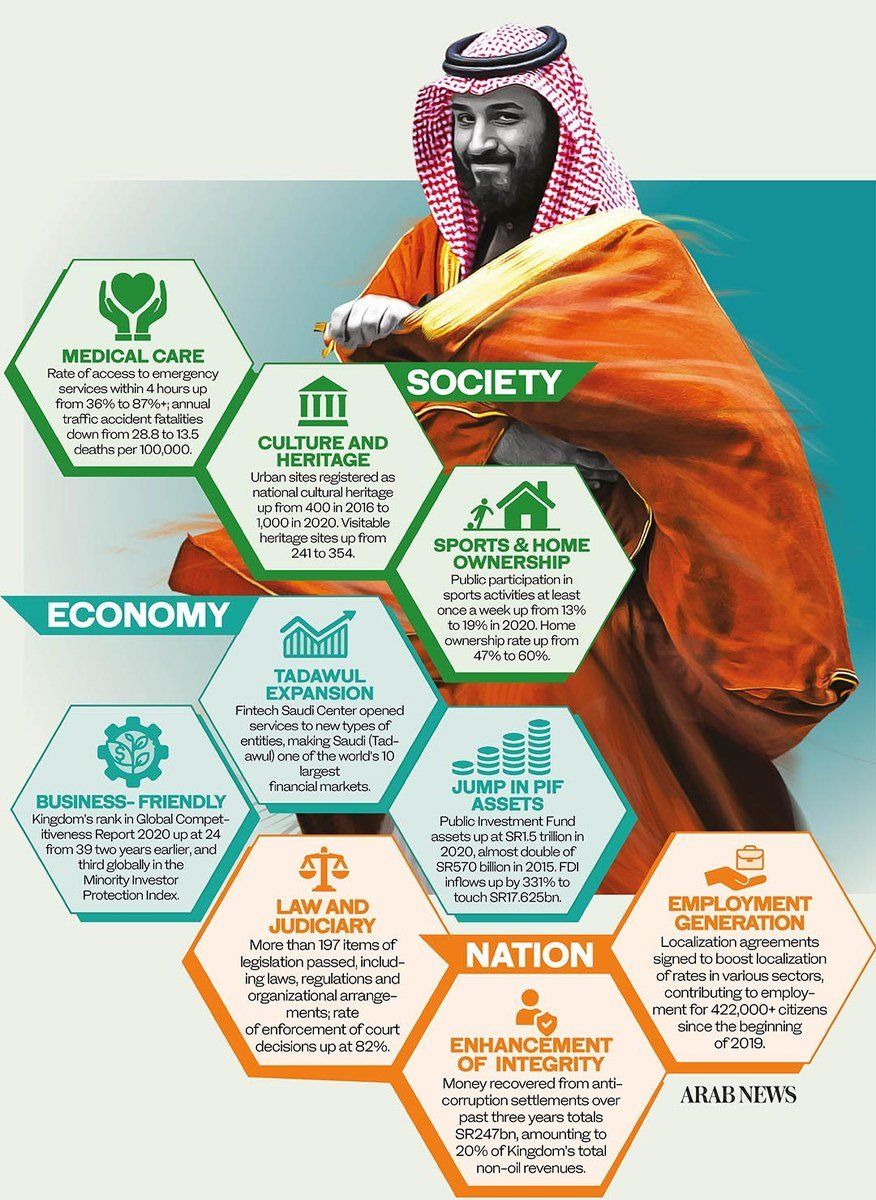 “Both residents and corporations in Saudi have benefited from well-established infrastructure. The majority of government transactions are made online, enhancing services delivery and easing business transactions.”

Through legislation designed to protect their personal and professional rights, workforce participation among Saudi women increased from 19.4 percent in 2017 to 33.2 percent in 2020.

The five years since the launch of Saudi Vision 2030 has also seen greater accessibility to public institutions and progress in the fight against corruption.

The total money recovered by the public treasury following anti-corruption settlements reached SR247 billion in the past three years, representing 20 percent of total non-oil revenues, in addition to tens of non-cash assets transferred to the finance ministry.

The council also said that law courts have become more effective and accessible, and a culture of accountability is becoming entrenched within government and among citizens.

Vision 2030 planners want to increase public participation and private-sector partnerships in the next phase, with plans in the offing for a health-sector transformation among other ambitious targets.

As Crown Prince Mohammed bin Salman has noted, much more remains to be done on various fronts to achieve Vision 2030’s goals.

These were the details of the news Arab coalition destroys drone targeting Saudi Arabia for this day. We hope that we have succeeded by giving you the full details and information. To follow all our news, you can subscribe to the alerts system or to one of our different systems to provide you with all that is new.